WASHINGTON, D.C.—House Republican Whip Steve Scalise (R-La.) joined Fox Business Network’s Mornings with Maria to discuss our nation’s economic recovery from the COVID-19 pandemic. Whip Scalise emphasized how no relief package will be able to substitute a fully functioning economy, and stressed the importance of safely reopening our businesses to eliminate the burden of this economic shutdown and preserve our nation’s physical and mental health. 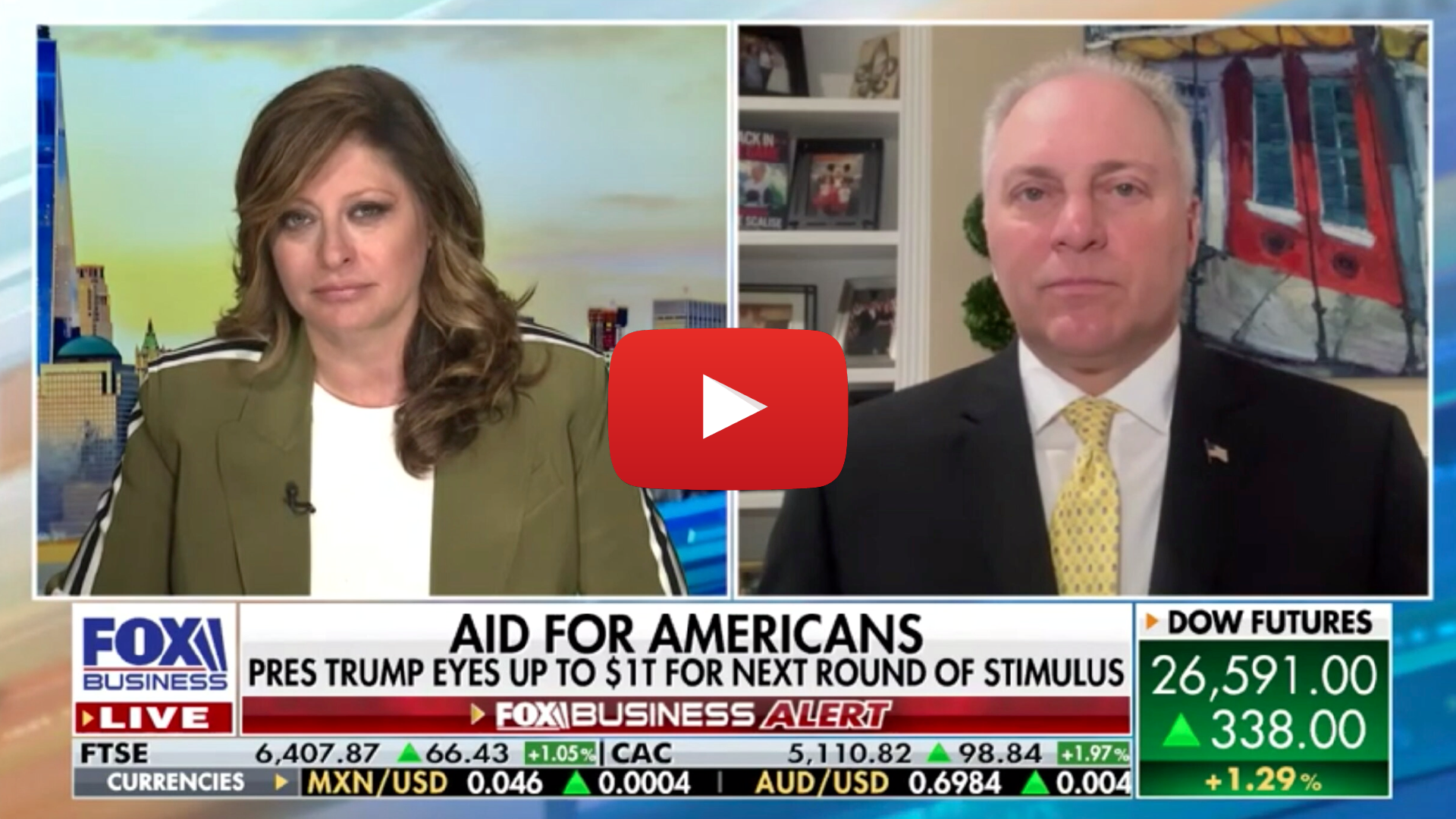 On the Paycheck Protection Flexibility Act:

“We’re still working on the two-plus trillion dollars that’s already out there, making sure that it works well. You just saw earlier this week, the Senate passed the bill the House passed last week to make even more reforms and improvements to the Paycheck Protection Program, that should probably get signed by President Trump today. That’s going to help a lot of American small businesses who hopefully are going to be able to come through this and start opening up a little bit more fully in the next few weeks. And so, you know, that’s something that we were all able to come together to pass, very bipartisan. Some of these things that you’re hearing out there like bailing out failed states, you know, that’s not going to happen and we’ve just got to work right now on getting our economy back open, Maria. When you talk about the jobs reports that are very dire, we also know that we’re starting to see businesses come back. That’s where our focus needs to be, helping them come out of this to bring jobs back, let’s restore the American dream that’s lost for so many people that needs to get back in place.”

“That’s correct, you go from 8 weeks up to 24 weeks to utilize [the PPP] because we did see the recovery was expected to move quicker, and of course, many states were later in opening up Phase 1 and so, let’s give them more opportunity to come back there. And then on the payroll side, as businesses were forced in many states to shut down even longer, their employees weren’t coming back. And, of course, we saw with the $600 per week, so let’s give them more flexibility so that they can at least utilize that money if more employees weren’t coming back, they shouldn’t be penalized for that. So, this helps a lot of small businesses, but the real answer is we all know is going to be to get our economy back open. You’re seeing states that did it safely, the states that opened up earlier, faster are not having any spikes in their hospital system, any difference in states that stayed shut-in. And so, that’s the real important thing, it was all about the health data, it was all about our hospitals not being overrun. Well our hospitals haven’t been overrun, not one hospital in America had a shortage of ventilators. Let’s start opening our hospitals back up, let’s start getting people back out to their jobs again and going to get their health care checkups again. Look at all the data that’s out there right now on the negative health consequences of the shut-in because people didn’t go and get their doctor’s visits, and their mammograms, and their ultrasounds. This is serious: serious concerns that this is causing to people’s health by staying shut-in.”

On the need to safely reopen our economy to preserve our nation’s physical and mental health:

“Whatever the total [economic recovery] number is, we know it’s very large because we’re already hearing reports in the restaurant industry, for example, 25 percent of the restaurants may not come back. In retail, you just mentioned JC Penney, other retailers that aren’t coming back. Of course, on the tech side there’s a lot of companies that are benefiting on the tech side. The oil and gas industry hopefully starting to come back when you see those jobs numbers, but not the jobs the oil price. But really global demand has to come back, global demand for oil, global demand for all products and the quicker it can come back but lower [our economic recovery] number will be. That’s why this shut-in has to end. You know, we’ve seen now there are negative consequences to keeping people at home. And our hospitals, not only are they not overrun, our hospitals are [on the brink of dying] because they don’t have enough patients that are coming in and getting their normal operations and procedures. So, we’ve got to get our economy opened up. It’s a large number, we can limit that number by getting our economy back on track and restoring jobs for people.”