WASHINGTON, D.C.—House Republican Whip Steve Scalise (R-La.) delivered testimony during today’s House Financial Services Committee hearing on “Preparing for the Storm: Reauthorization of the National Flood Insurance Program (NFIP).” Whip Scalise stressed the importance of passing a long term reauthorization of NFIP that will give certainty to NFIP policy holders while including reforms to improve the program. 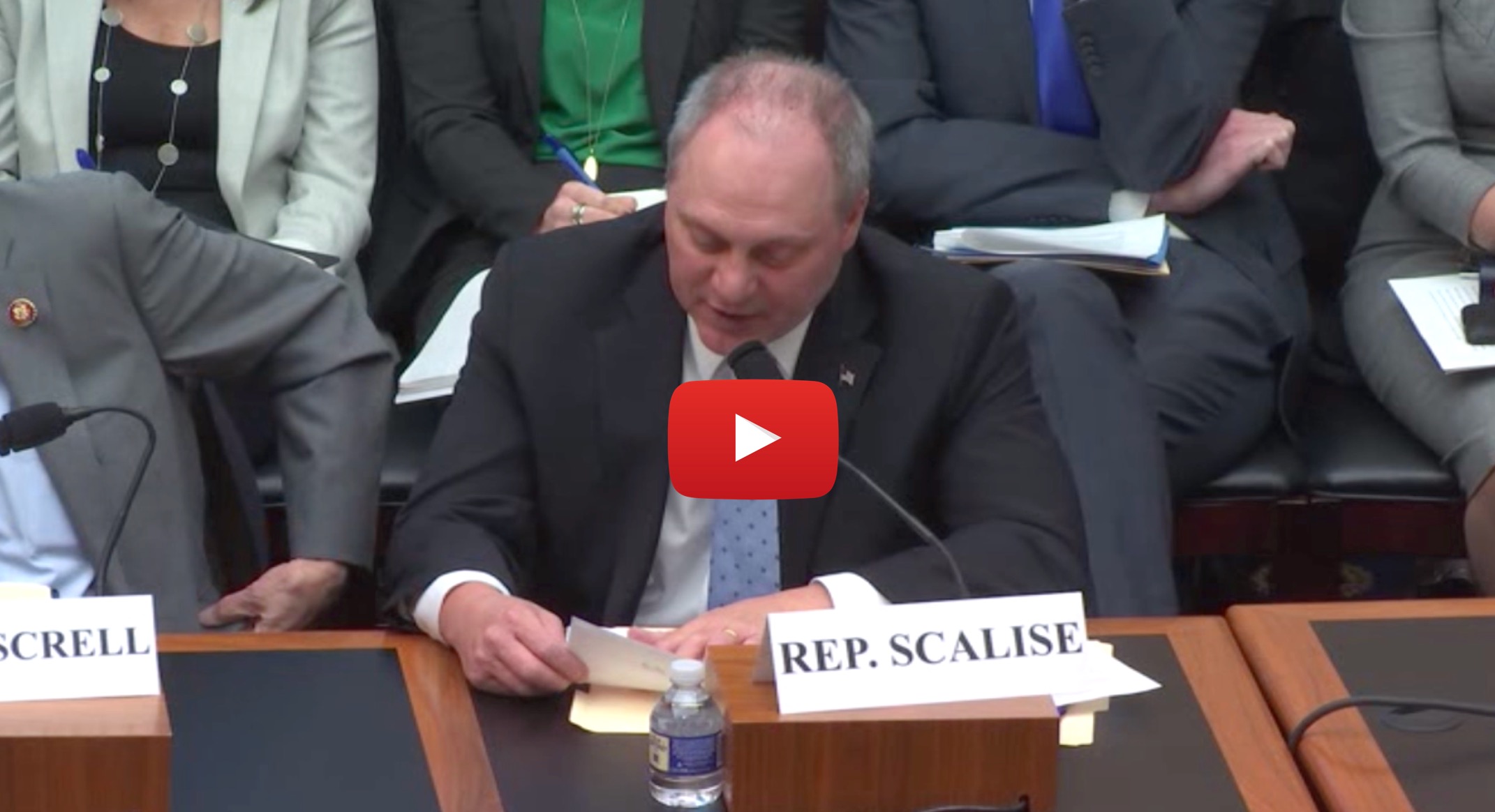 Read the full remarks below.

Thank you Chairwoman Waters, Ranking Member McHenry and members of the committee for allowing me the opportunity to discuss the reauthorization of the National Flood Insurance Program.

With over 5 million policies nationwide, NFIP is the sole provider of flood insurance for the vast majority of families and small businesses across our country. I applaud the committee for moving early in this Congress on legislation to provide a long term reauthorization of the program, and I really hope we can all work together toward a strong bipartisan bill that gives homeowners certainty, instead of continuing on the path of the short-term extensions the program has experienced since October 2017.

Just in the past 5 years, all 50 states experienced a flood event. As a matter of fact, 38 states had a flood event large enough that they warranted a federal disaster declaration. Since 1956, there have been 15 states that have experienced over 50 federally declared flooding disasters, including Missouri, Kentucky, and Oklahoma, all states far from the coast.

I have long believed that NFIP is not – and should not be – a partisan issue. While there are many parts of the NFIP that are in need of reform, one of the biggest challenges we face is how to ensure the program remains affordable and stable into the future, while also limiting the financial exposure to taxpayers.

On affordability: it is important to keep in mind that if NFIP is unaffordable, some people will simply drop their flood insurance altogether, further strapping the program and leaving taxpayers more exposed after major storms. We must protect the grandfathering that currently exists in the program so that homeowners don’t see unfair and massive rate spikes that destroy housing markets in whole communities. Also, we have to ensure that everyone who is required to have flood insurance actually has the ability to get it. I have always believed that we should incentivize more people to carry flood insurance, not create a system where people drop their insurance because they can no longer afford it.

There is a certain irony about the way the federal government handles flood disasters. When you look at past disasters- whether it’s Hurricane Katrina, Superstorm Sandy, the 2015 South Carolina floods, or Hurricane Harvey, Congress passed supplemental appropriations bills totaling billions of dollars for recovery, and a lot of those recovery dollars go to rebuilding uninsured properties. In the 2015 South Carolina floods, for example, the average NFIP coverage rate in counties with a federal disaster declaration was 5 percent; for Hurricane Harvey, the percentage of people that carried flood insurance was only 10 percent.

Of course, we came in, the federal government, and passed supplemental appropriations bills to make sure everybody was made whole. If only 10 percent of the people had flood insurance, the NFIP paid those policies, but the taxpayer paid the other 90 percent. When we talk about the debt of the program, let’s keep in mind, in the major disasters that have been declared that I talked about, whether it’s Harvey or Katrina or Superstorm Sandy, the federal taxpayers came in and ultimately paid for the people who had no flood insurance. The only side that’s talked about is the side on NFIP, the people that actually paid into a program.

While some people call for the dismantling of NFIP, from a taxpayer perspective, what makes more sense is to work on policies that will encourage the creation of a private marketplace for families to buy flood insurance. Currently, there are no other options outside of NFIP, and dismantling NFIP will only serve to increase the rate of uninsured properties and therefore increase the exposure to taxpayers in the event of a federally-declared flood disaster.

I was very pleased to see the banking regulators earlier this year clarify that private insurance coverage must be accepted by financial institutions to meet flood insurance requirements. In doing this, hopefully we will start to see a private market begin to develop.

This has been something that many of us have been deeply committed to, and I hope that the bill this Committee produces will strengthen the ability for the private market to start offering flood insurance across the country while also protecting policyholders.

Finally, while this next point was one of the most contentious last Congress, I hope the committee considers addressing extreme repetitive loss properties that experience very regular flooding events. While any changes to rates and participation in the NFIP must be fair and transparent for the homeowner, I would encourage the committee to look at responsible and realistic changes to how the program deals with those properties that experience very regular flooding and rack up multiple claims that far exceed the value of the property, whether that’s through additional mitigation or offers of buy outs, or other changes.

Again, I thank the committee for the opportunity to testify and talk about the importance of a long term reauthorization of the National Flood Insurance Program. I look forward to working with you all as we achieve a program that is fair for ratepayers and for taxpayers with long term certainty.