WASHINGTON, D.C.—As the House prepares to vote this afternoon on the American Health Care Act to repeal and replace Obamacare, Majority Whip Steve Scalise (R-La.) spoke about the need to pass this legislation on the House floor: 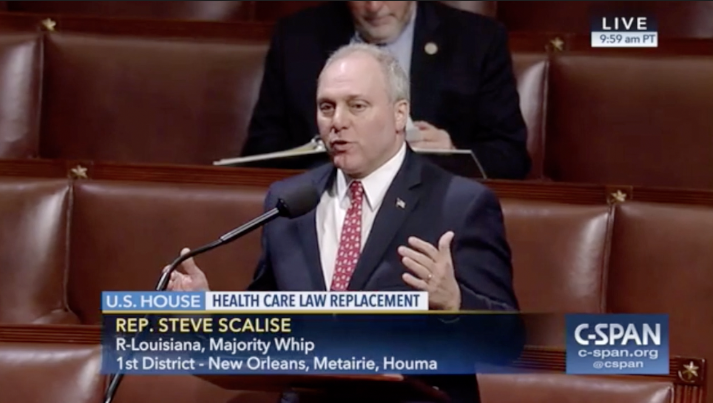 “I rise in strong support of this bill that finally provides relief to the American people across this country from the failures of Obamacare.

“Just how bad is it failing? You don’t have to look any further than what happened in Iowa yesterday, where literally they’re going to have—in 94 out of 99 counties—nobody to write insurance for people that are in the Obamacare exchanges. What do the people, Mr. Speaker, that are opposed to this bill say to those millions of people in Iowa, who are about to have no place to go to get healthcare?

“What are the people that oppose this bill, Mr. Speaker, going to say to the millions of people with pre-existing conditions across the country who are being faced with double-digit increases in their health insurance every year and oh, by the way, premiums and deductibles as high as ten thousand dollars, which are creaming those folks who are struggling under the weight of this bill?

“What we’re replacing it with, Mr. Speaker, are reforms that actually lower premiums, that actually put patients back in charge of their health care decisions, so that elitists up here in Washington won’t tell you what you have to buy. You actually get to make that choice yourself, and you get to focus on plans that are good for your family, at lower costs, so that you can be in charge.

“And, oh by the way, reforming the Medicaid system, one of the most broken forms of healthcare so that states actually have the ability to innovate and help low-income families.

“This bill is important, Mr. Speaker, to rescue the American people from a law that has failed dismally. Let’s end the skyrocketing premium increases, let’s lower costs, and put patients back in charge of their health care decisions.”