WASHINGTON, D.C.—Republican Whip and Ranking Member of the Select Subcommittee on the Coronavirus Crisis Steve Scalise (R-La.) opened the Select Subcommittee’s briefing with several of our country’s mayors by mourning the somber milestone of 100,000 American lives lost to COVID-19, while recognizing the strength and resolve of our great nation as we all came together to flatten the curve.

Scalise emphasized how “no relief package can substitute a fully functioning economy,” and noted that American cities must make a concerted effort to safely reopen to eliminate the burden of this economic shutdown on our state and local governments and preserve our nation’s physical and mental health. 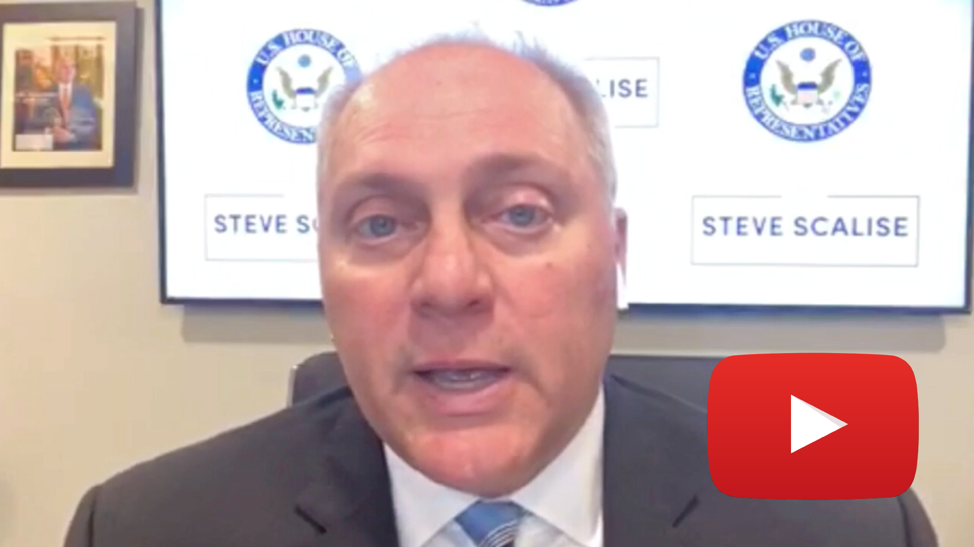 “Mr. Chairman, our country mourns a grim and somber milestone.  The virus has taken the lives of over 100,000 of our fellow Americans.  The speed at which this evil invisible virus has killed has been unmatched by any foreign military foe in our nation’s history.

“Every American family has been touched in some way by this virus, and the global response that has brought us here today.  We have seen tragedy and hardship, but we’ve also been reminded again of what a truly united and compassionate country America is.  From the front-line health care workers to every individual who social distanced to protect others — we came together to flatten the curve.  Let us not forget the strength and resolve of this great Nation.

“But the focus of today’s hearing points to another hard-won lesson.  America needs to safely get back to work!

“Our health depends on it.  The ability of mayors to govern — to fix the streets, to pay police, firefighters, teachers, ambulance drivers — depends on America getting back open again.  Our upward mobility — and the promise that no matter where you begin, you can achieve your dreams in America — depends on America reopening that opportunity to all who seek it.  Our personal relationships – with family, friends — with God — depends on us getting back to a free and mobile life.

“Some have said we must remain closed — or be prepared to close again – as if it were some trade off between health and jobs.  Mr. Chairman, our physical and mental health depends on safely reopening, and reestablishing our quality of life.  A new Kaiser poll released this week shows 48% of Americans have delayed medical care due to this pandemic — and 11% said their personal condition worsened as a result of the delayed care. The same poll shows Nearly 40% of Americans, however, said stress related to the coronavirus has negatively affected their mental health. Compared with last April, texts to federal government mental health hotlines are up roughly 1,000 percent.

“And we know that people with lower incomes and those whose jobs or wages have been cut are experiencing the highest levels of psychological distress.

“A survey by the American Cancer Society found that, among cancer patients in active treatment, 79% reported care delays — including 17% who reported delays to cancer therapy like chemotherapy, radiation or hormone therapy.  One study predicts that if the United States reaches Depression-era level unemployment rates, we could see 18,000 additional suicides and additional 22,000 overdose deaths.

“More than half of childhood vaccinations are not being performed, setting up the potential for a massive future health disaster, including a measles outbreak.

“If anyone is still wondering whether remaining closed is bad for our nation’s health
— think about this.  The health care industry lost over than 1.4 million jobs in April.  Over one million people who were working to improve the health of America are no longer doing that work.

“38 million Americans have filed unemployment claims since late March.  But even that unthinkable number does not tell the whole story.  The burden of this shutdown has disproportionally fallen on those in our society least able to bear it.  The Federal Reserve Chairman has said that 40 percent of Americans earning less than $40,000 a year have lost their job since the economy was shut down.  80% of jobs recently lost were those with below-average weekly wages.  Six-in-ten Hispanic adults say they or someone in their household has lost a job or taken a cut in pay due to the coronavirus outbreak.

“We all agree and understand that unemployment leads to an increase in deaths.  Based on all these facts, if we don’t see a more concerted effort by some to safely reopen soon, we may lose more Americans to the shut down than we have to the virus itself.  We cannot let that happen.

“We can safely reopen, and we must safely reopen. In fact, many states and cities have already shown us how to effectively do this.

“Our witnesses today are Mayors — officials who have seen firsthand the impact of the shutdown.  They have seen their health care systems stressed but not over run.  They‘re starting to see local businesses start to disappear.  Children left with fewer educational opportunities.  Each one knows this cannot go on.

“No relief package can substitute for a fully functioning economy, and all that goes with an open and free society.

“I look forward to hearing details on each witnesses’ plans for re-opening.  What each of you has learned and how each city plans to adapt as new information from across the country on what is working becomes more widely available.”