WASHINGTON, D.C.—House Republican Whip Steve Scalise (R-La.) joined Fox News Channel’s America’s Newsroom from the White House this morning before departing with President Trump to visit Sempra Energy’s Cameron LNG Export Facility in South Louisiana. Whip Scalise highlighted the important role American energy production plays in our country’s national security and the many good jobs it creates here at home. Whip Scalise also shared his concern that the FBI probe into the Trump campaign was politically motivated and the importance of Attorney General Bill Barr’s investigation into this matter, so bad actors can be held accountable. 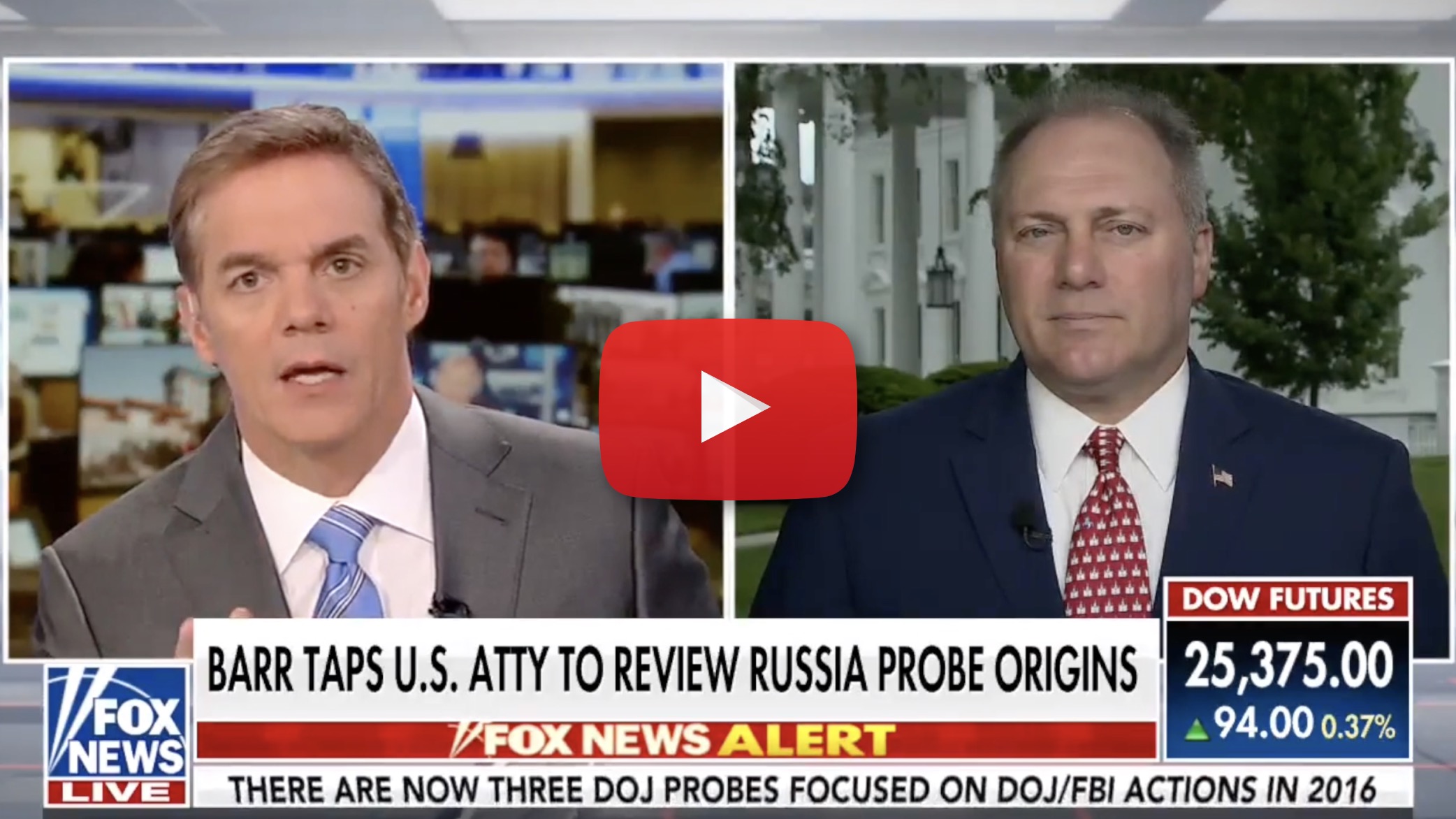 On Attorney General Barr’s efforts to uncover the political motivations behind investigations into the Trump campaign:

“Well it tells me he is serious about cleaning house within the FBI and dealing with those bad actors. There are some people over there—most of the FBI agents we know do great work for our country, but there were some who were politically motivated. They were carrying out their job not in what was best for the country, but in what was best to pursue their own political agenda. There is absolutely no place for that within the FBI.”

“Well I know we’ve laid out a lot of it in the investigations we’ve done and I associate myself with [Former Congressman Trey Gowdy’s (R-S.C.)] remarks because he headed the [Oversight & Government Reform] Committee and did a lot of that work and we saw a lot of that. I read some of those reports. It was very disturbing when you looked at the abuse of the FISA court, when you looked at the very nefarious nature about which this entire investigation started. It was clear that there were some people over there at the FBI that didn’t want Donald Trump to be elected President, and they were using their position to try to stop him. That cannot be tolerated in America. This is not how we run our country.”

“Well, we’ll find out when [the campaign investigation] happened but we knew that there were a lot of communications with political entities. The Democrat Party was behind some of the information that was gathered. That was the basis for the investigation and yet that wasn’t presented to the FISA court the way it was supposed to be. All that ought to be looked into because those would be clear abuses of power and anyone who abuses their power in a government position ought to be held accountable.”

On the four active investigations into spying on the Trump Campaign and Russian influence on the election:

“Well, ultimately it’s about accountability. You know if somebody did something wrong, if they abused their position of power, they ought to be held accountable. I think people expect that. They don’t want to see witch hunts and they don’t want to see the federal government using its power in a way to go after and target American citizens, especially a candidate for President of the United States, because they disagree with that person’s political views. That goes against everything our country was founded on.

“Well I think you’re seeing the Justice Department go on offense to say, ‘Let’s clean up the bad apples.’ If there are bad apples within the organization they need to be cleaned out. Let’s go restore the integrity of the good working men and women of the FBI and the job they do for our country, and make it clear that if you want to go to the FBI or any intelligence agency, you are there to go and represent and defend this country, not to carry out your own political agenda.”

On the trade war with China:

“Well look we’ve always been in a trade war with China. I think President Trump is really the first one to finally acknowledge it and confront it. I would like to see it addressed quickly. We all would. But at the same time China has been cheating. They steal intellectual property. They don’t play by the rules. And so having a trade deal that not only puts rules of the game in place that can be enforced, but then has an enforcement mechanism, is critical for our economy.  …Our allies around the world also want that same confrontation.”

“Well China has always cheated on the rules. They’ve not played by the rules for a long time, as long as people have been following the way that China operates. They play by a different set of rules. Frankly when you are dealing with trade negotiations and trade deals with friends or with people who aren’t maybe as close of friends as others, you still have to be able to play by the rules and trust that the other person is doing the same thing and treating you fairly according to those agreements.”

On his visit with President Trump to Sempra Energy’s LNG Export Facility:

“Well President Trump is coming down to see the Sempra Energy facility. It’s one of these massive LNG export facilities where we are able to showcase how American energy is helping our friends around the world and creating great jobs at home. This is a multi-billion dollar, privately funded facility.

“In fact, today they just announced that they’re making their first liquefied natural gas. Then that will be exported around the world to our friends. All of our friends in Eastern Europe and other parts, even in Japan, that have to get their energy from Russia and don’t want to have to get it from Russia, can now get it from America. This is one of those facilities that showcases how America is not only creating jobs at home with energy policy that makes sense, but we are helping our friends pull away from Russia.”