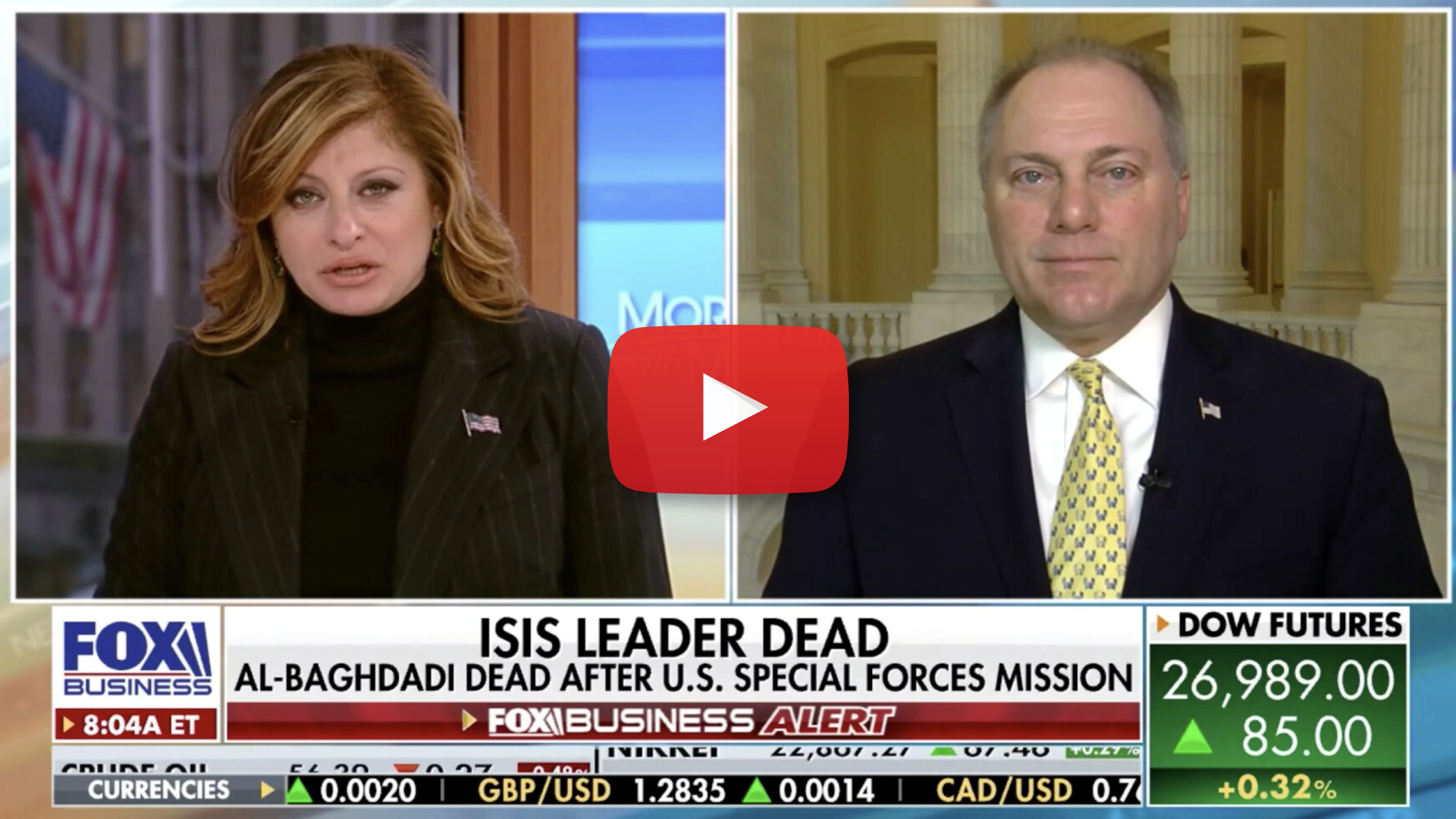 On the successful mission that took out ISIS leader Abu Bakar al-Baghdadi:

“…[President Trump and I] talked about a lot of things including the successful taking out of ISIS’ leader. It was a major win for our United States military, and our war against terror. So you know, the President is focused on his mission that’s the great thing. He doesn’t care how the media reacts. It was really disgusting to see some of those headlines like The Washington Post, where they are almost trying to pay tribute to this ‘austere religious leader.’ This guy was one of the worst terrorists in the history of the world, forming ISIS, being the head of ISIS trying to be the head of the caliphate. The fact that we took him out, and did it at a time when he wasn’t going away. Let’s keep in mind Maria, just a few weeks ago, al-Baghdadi was putting recruiting videos out to continue to recruit people all around the world to join ISIS and their fight. He was encouraging some of the ISIS terrorists in those Kurdish prisons to escape. Fortunately, we have been able to hold most of them. But this is a person who was active still in the war against terror, and a major threat to the United States and any other country who seeks freedom.”

On Chairman Schiff hiding impeachment proceedings from the public:

“Maria, you described it right, you know the fact that Adam Schiff still goes on this drumbeat of these secret, behind closed doors impeachment proceedings. They’re trying to hide from the public what’s really happening in there. They leak selective things out that turn out in many cases to be disputed. And then Schiff tells all the Republicans on the committee not to leak as he is leaking and so they can try to set a false narrative with the media who is just drooling, hungry to say anything negative about the President. Case in point this weekend where the President leads an effort with our military, who by the way, the Special Forces of the United States of America are better than anybody in the world; incredible job that they did over the weekend as well. The President is not deterred by [the media], he continues to do his job. My colleague John Ratcliffe I thought made a real important point and I believe it was on your show, where he talked about the fact that normally, the Intelligence Committee would be getting regular briefings on things happening around the world including these kinds of missions where we are identifying where we think al Baghdadi is and it’s a weeks long process. Just like with Osama bin Laden where you have to track, you get sources, you think you might know where he is but you’re not sure, and then ultimately the President’s got to make that call, whether or not to go in, and of course, President Trump did. But they’re not getting those regular briefings because Schiff is so infatuated with impeachment that he’s not having those briefings in the Intelligence Committee. Just like the House Floor, Pelosi is not bringing up bills to lower drug prices or to pass trade deals like USMCA, because she is infatuated with impeachment. The country is paying a price because of this drumbeat they have just because they don’t like the President and the results of the election, they’re trying to impeach him behind closed doors.”

“I think people are starting to pay attention to what is really going on, and, you know, again, it’s going on in secret behind closed doors. A number of my colleagues last week, Matt Gaetz and I started to really lead an effort to go down there and just see what’s happening. We didn’t go down to disrupt anything, but we wanted to see what’s happening. We are voting Members of Congress, we’re going to be asked to vote on whether or not to impeach a President. And no Member, by the way, 75 percent of our Members of Congress are not allowed to go in this room. That’s ridiculous! Adam Schiff is the only person that’s allowed to call witnesses and they call that fair. They say ‘Oh, just the fact that Republicans on the committee get to question Adam Schiff’s witnesses as Schiff is leaking out secretly, information about hearings.’ That’s not a fair process. People get the lack of due process, and fairness, and they also are starting to make the link, Maria, between the things that are not being done in the House. Again, there was a bill that came out of committee unanimously – a package of bills – to lower drug prices. Those bills would be signed by the President today, families in America would be paying less cost for their prescription drugs and that’s not happening today because Pelosi won’t bring those bills to the Floor because of her infatuation with impeachment. The people in this country are paying a heavy cost and I do think they’re finally starting to recognize what’s happening and what’s not happening because of this impeachment witch hunt.”

On the unfair impeachment process:

“Well this is like Lucy moving the football from Charlie Brown. They keep saying they are going to make it public and people will eventually be able to read the transcripts. The problem is they are trying to do the damage before you ultimately find out that the emperor has no clothes. They keep leaking out information to make it look like there is smoke and innuendo of bad things that happened. And then we find out from Republicans on the committee when you ask wait, there is a report this is happening. Actually no, that’s not what happened in the committee hearing. Yet that is what the press is reporting because Schiff won’t release anything to the public. It is their playbook. It’s that they’re going to try to selectively leak out false and misleading information, where Schiff can keep building this case of thousands of pages of documents – nothing of which, by the way, are high crimes and misdemeanors which is the Constitutional standard for impeachment. But enough innuendo on a one-sided basis that the Democrats who want to vote for impeachment can try to justify their vote.”

On the failure of the Democrats’ agenda:

“Maria, not only are we focused on taking the House back but around the country you are seeing in a lot of these swing districts they’re getting angry that things are not getting done that should be getting done. A lot of these Democrats who ran saying they are going to be different. Remember, these are Democrats primarily, 31 Democrats who sit in districts that Donald Trump won. They ran saying they were going to be pro-life and pro-gun and anti-Pelosi and they’re voting right down the line with Pelosi. They’re committing to impeach a President and they can’t even name you a single high crime or misdemeanor. They’re hoping crimes were committed. Which, by the way, is not the Constitutional standard. So, they’re not different, in fact, they’re puppets of Nancy Pelosi. They are part of the squad, and a lot of them are going to get beat. We’re by the way, laying out an agenda that shows the country what we would do if we had this majority back. Just like when we cut taxes and got regulations under control working with President Trump, and it’s delivering for families. Hardworking families see more money in their paychecks, they realize these conservative policies work. They don’t want these Democrats that are just so focused on this socialist agenda to impeach a President because they’re afraid he’s going to get re-elected.”