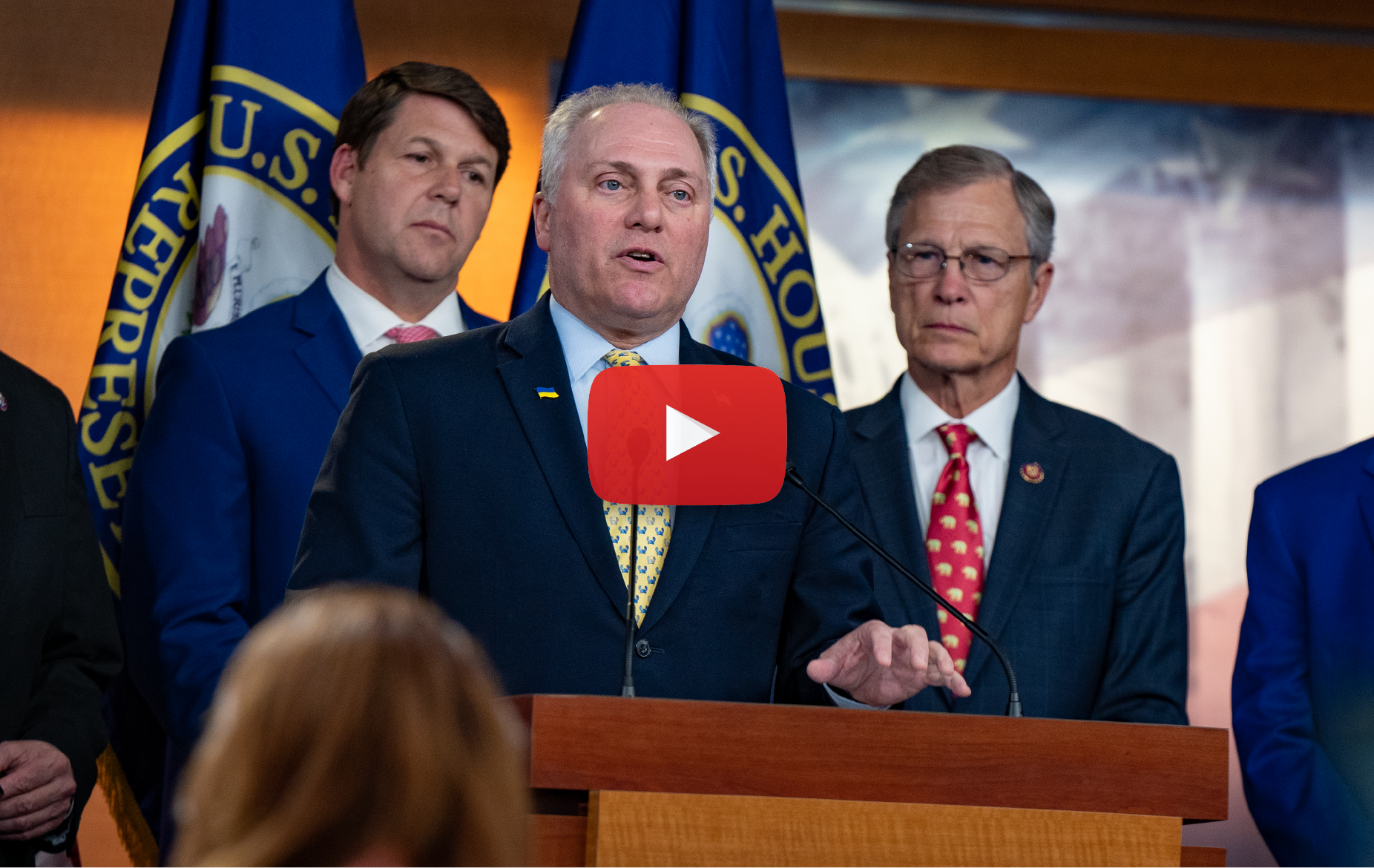 Click here or on the image above to view
Whip Scalise’s remarks.

“America’s border is under siege. And if you look at what President Biden and Secretary Mayorkas have done, they have turned operational control of America’s border over to drug cartels, who are trafficking people into our country every day, making billions of dollars to fuel their drug trade, and they’ve also created a pipeline to bring in deadly drugs like fentanyl that are killing people all across America.

“Every town is now a border town because every community in America is negatively affected by President Biden and Secretary Mayorkas’ failure to secure our southern border as [has] been pointed out by [Republican Study Committee Chairman] Banks, and others, over 100,000 young people died last year from fentanyl overdoses primarily coming from China through the southern border because President Biden won’t do his job in securing our border.

“When you hear these numbers – nearly 2.5 million people that have come here illegally – that’s the size of the city of Houston, Texas, the fourth largest city in America. That’s how many people – that we know of – have come across illegally. There are also hundreds of thousands of people who never got apprehended. There are dozens of people that we’ve caught that are on the Terrorist Watch List who have come into our country illegally.

“And when you think about what’s going on all around the world, we’re not just talking about people coming from South and Central America. There [are] over dozens of countries that are included in that number of people that are coming here illegally, including from Middle Eastern countries. And when you’ve got the Taliban – and President Biden turned over to a terrorist organization in Afghanistan. When you look at what’s happening in Ukraine, with Russia, moving in with China looking to move [on Taiwan], there are threats all around the world. The last thing we need to do is have an unsecured border.

“We need to secure America. From our border – we need energy security. We need a lot of security. But it starts with homeland security. And that’s where Secretary Mayorkas has failed the American people.

“We’re going to continue to demand answers and demanding that he do his job in securing the border. But in the meantime, if you look at what Title [42] provides to our country as a defense mechanism, it’s not just about COVID. Think about the fentanyl – one of the most deadly drugs. And again, you go through any community in America, and you ask families if they know somebody who’s died from [a] fentanyl overdose. Sadly, you’ll probably get everyone telling you they know somebody who’s died because of fentanyl. It’s come through the open southern border that President Biden and Secretary Mayorkas [have] allowed to happen.

“Now, thank goodness for at least now, a federal judge just the other day in Louisiana blocked President Biden’s attempt to drop Title 42. But he’s not done. He’s going to keep trying. And by trying to drop Title 42, he makes America less secure.

“It’s a national disgrace that is completely preventable, and it was completely created when President Biden decided that he wanted to open the border by getting rid of ‘Remain in Mexico,’ by getting rid of the Northern Triangle agreements, by stopping [the] construction of the wall that President Trump had built to say, ‘Secure our border.’ It was done before, [and] we’re going to continue fighting to ensure that we get back to a secure border.”