Whip Scalise also discussed the importance of focusing on implementation and renewed funding for the Paycheck Protection Program to provide direct relief to American workers who need help now, and slammed Democrats for putting their unrelated political agenda over relief for American workers and businesses. 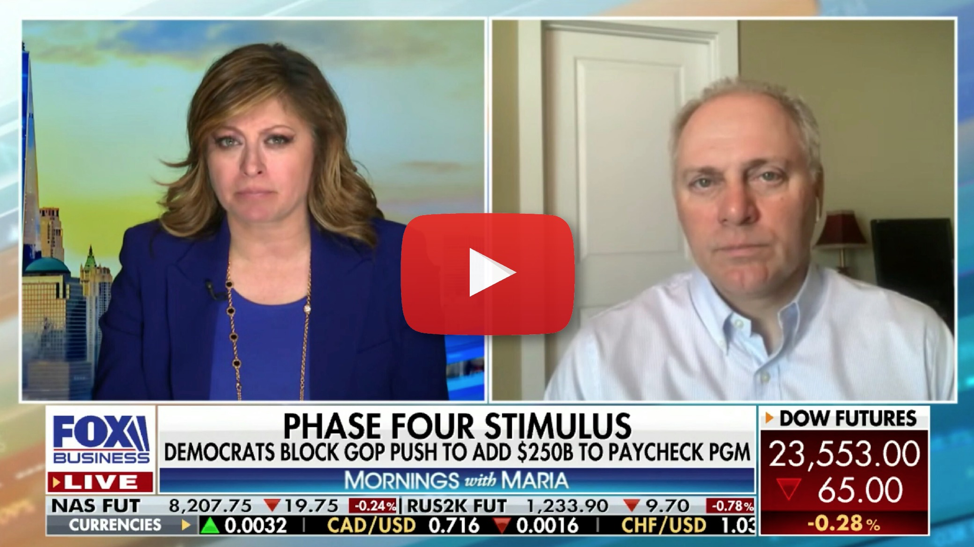 On President Trump pressuring Saudi Arabia and Russia to negotiate an end to oil market dumping and price manipulation:

“The House Energy Action Team, led by Markwayne Mullin and Jeff Duncan, part of the Whip Team, we had been meeting for weeks and talking to the State Department about addressing Saudi’s dumping and cutting the price of oil. And so, you know, to see the President jump in, recognize this was a problem and call on Saudi and Russia to go back to the table and address what they were doing. Because look, the real problem, we all know, is that right now is just a global shortage in demand. And so, you know, the old 100 million barrels a day of demand, you’re seeing that down maybe 30 to 40 million barrels because most governments are shut down.

“Obviously, we’ve got to get our economy back up and running, and other countries are going to have to as well – we’ll see that addressed. But at least to get Saudi and Russia to stop their feud, which was adding even more fuel to the fire, so to speak, by dumping even more oil onto the market. Getting that resolved is going to at least stabilize things. Now, we still need the global demand to pick up.”

“Unfortunately, there’s still a really tough time right now in the oil field. This was already happening before the COVID-19 outbreak, and it got much worse because of the global drop in demand for oil. And so, you know, you’re still seeing a lot of wells shut in and a lot of companies that are teetering on the edge, which is why we need to get that Paycheck Protection Program flushed up so that it doesn’t run out of money to help those small businesses that are hanging on, including a lot of these oil and gas companies.”

On the implementation of the Paycheck Protection Program:

“You know, you’ve seen the Department of Treasury working at a rapid speed to address issues that have come up. Secretary Mnuchin and his team have been working overtime to make additional changes. You saw right before the program went online, just a little over a week ago, he worked with the banks to get some issues worked out so more banks can participate. And look, you’re seeing a lot of smaller community banks write these loans. I’ve seen numbers well over $160 billion in these loan applications have been received. We’d like to see some of these bigger banks that were shutting out.”

“I think it’s working, but it can work better. A lot of the banks that were not participating in those first few days. You saw the President even calling out some of those big banks that for whatever reason weren’t helping their local customers. And so, more people have figured out how it works. But for those banks that go in on day one, they’re accepting a lot of applications. I’ve talked to small banks in my district in Southeast Louisiana and they’ve seen a large demand for this program.”

On the need to focus on helping small businesses stay afloat:

“Well, I think, still, the focus needs to be on making sure all of our efforts are on making phase three work properly. And part of that is making sure that the program has more money for the Paycheck Protection Program, which has been incredibly popular with small businesses. But like you said, there were some banks not participating early on that now are. There are a lot of small businesses that are finally starting to realize this is an important program to help them hold on. But everybody knows you need cash flow, ultimately, to keep your business afloat. And that’s why I would like to see us, by the end of this month, be able to start looking at a plan to turn things back on and turn the economy back on again. But in the meantime, just to hold these small businesses through this tough time, this program’s been effective and really successful. It needs the additional money that the President called for. It seems like everybody, Republican or Democrat, recognizes this program needs to be extended. I hope Democrats stop playing these games about trying to get more Kennedy Center money and all this other foolishness and just help these small businesses that are hanging on by a thread so we get our economy back.”

On decreasing our dependence on China for our medical supply chain:

“Look, this is something President Trump had taken on before the COVID breakout. And so, you know, you talked about it a little bit earlier, not only the price gouging but the holding back of some of the critical supplies, PPE’s, pharmaceutical drugs, so many other things that we rely on. I think it’s exposed, this has exposed even more how we are too dependent on China for our supply chain. We’ve got to bring a lot of that back.”

“Whether it’s in a phase four, I think, frankly, the Administration’s already been in front of this issue and starting to bring back manufacturing. This underscores why we need to bring more of that manufacturing back to America.”