Additionally, Whip Scalise blasted Nancy Pelosi and Chuck Schumer for holding funds for the Paycheck Protection Program hostage to their unrelated partisan demands as Americans lose their jobs and small businesses face unprecedented uncertainty. Whip Scalise also thanked President Trump for providing our healthcare heroes with the equipment necessary to combat the spread of Coronavirus in Louisiana, and across the country. 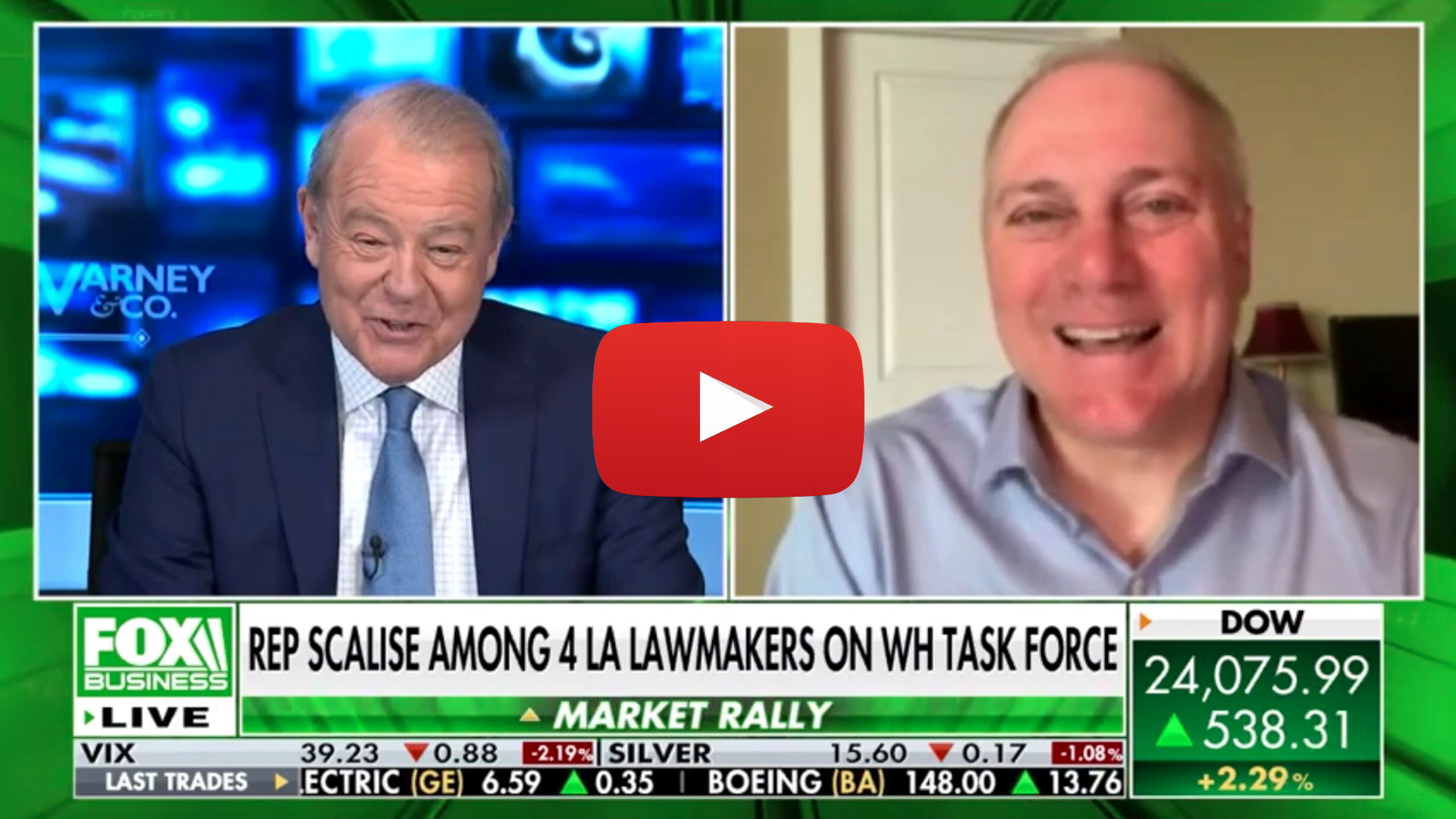 “Well, there are a lot of things that are being worked on. And, look, there a lot of concerns obviously…this fight between Saudi Arabia and Russia where Saudi was dumping oil and discounting the price, and in many ways not just to fight Russia, but to try to crush our energy dominance especially in the shale plays. We at least got that put on hold and reversed. The real issue, Stuart, if you look at what is driving all of this, and that is the tremendous drop in demand for oil globally. You know, we were at about 100 million barrels a day of oil used by the world before this pandemic broke out, and today we’re at maybe 75 million or less. So, you’ve seen more than 25 percent drop in demand, and so even a 10% correction by Saudi and Russia isn’t making up the gap, and that’s why the price is so low. It is going to have to rebound. We’ve got to get the economy open again, Stuart, though that’s the real answer. We have to get our economy and the world economy open again.”

“It’s really mind-boggling, Stuart, when you have small businesses hanging on by a thread, and many are actually going to go under in these next few days. And there are also millions of employees, you just saw another five and a half million people put on the unemployment roll. The Paycheck Protection Program that we’re trying to keep going, that President Trump wants to keep going, is literally the thing that’s going to bring millions more people back into the work force, back onto the payroll, off the unemployment lines. And it’s incredibly successful, working well for small businesses, and this is what Nancy Pelosi and Chuck Schumer are holding hostage to their other demands, instead of just saying, ‘Okay, we recognize there’s other fights we’re going to have politically, but don’t hold anybody hostage. Let’s keep this program going, let’s keep our small businesses and the millions of Americans who rely on them for their jobs to stay afloat.’ And yet [Democrats] still say no, it’s just unbelievable that they would do this to millions of Americans who have incredible uncertainty and the likelihood of losing their job and the company that employs them going under.”

On the status of Coronavirus in Louisiana:

“Well I appreciate you asking, and look, the states doing better, the city is starting to come down from that big spike. And, you know, unfortunately you’re still seeing a number of deaths from Coronavirus, but you’re also seeing a reduction in the people on ventilators, for example, which is a good sign for the long term … New Orleans was one of those areas that was concerned about a shortage of ventilators, President Trump stepped in quickly and helped to get us more ventilators and PPE for our hospital workers. And I’ve talked to the heads of all of our hospitals and they’ve got things under control. They’re doing incredible work. We’ve even talked about how the healthcare industry can play a role in reopening our economy safely. We’re not talking about going back to the things that were going on before when the disease was spreading, but how to open the economy and do a better job of stopping the spread of the disease at the same time. And the hospitals have a real important role to play there, and they have some really good smart ideas about how to do that.”