WASHINGTON, D.C. — House Republican Whip Steve Scalise (R-La.) joined Fox News Channel’s The Story with Martha MacCallum this afternoon to discuss how Democrats do not have the votes to pass their far-left tax-and-spending spree. Whip Scalise emphasized that voters from across the country rejected the Democrat agenda on the ballot on Tuesday, proving the American people are tired of the inflationary spending they are seeing from Washington Democrats. In addition, Whip Scalise called out President Biden and Speaker Pelosi for being out of touch with struggling low-income and middle class American families and criticized the Biden Department of Energy for not having a plan to lower rising gas prices. 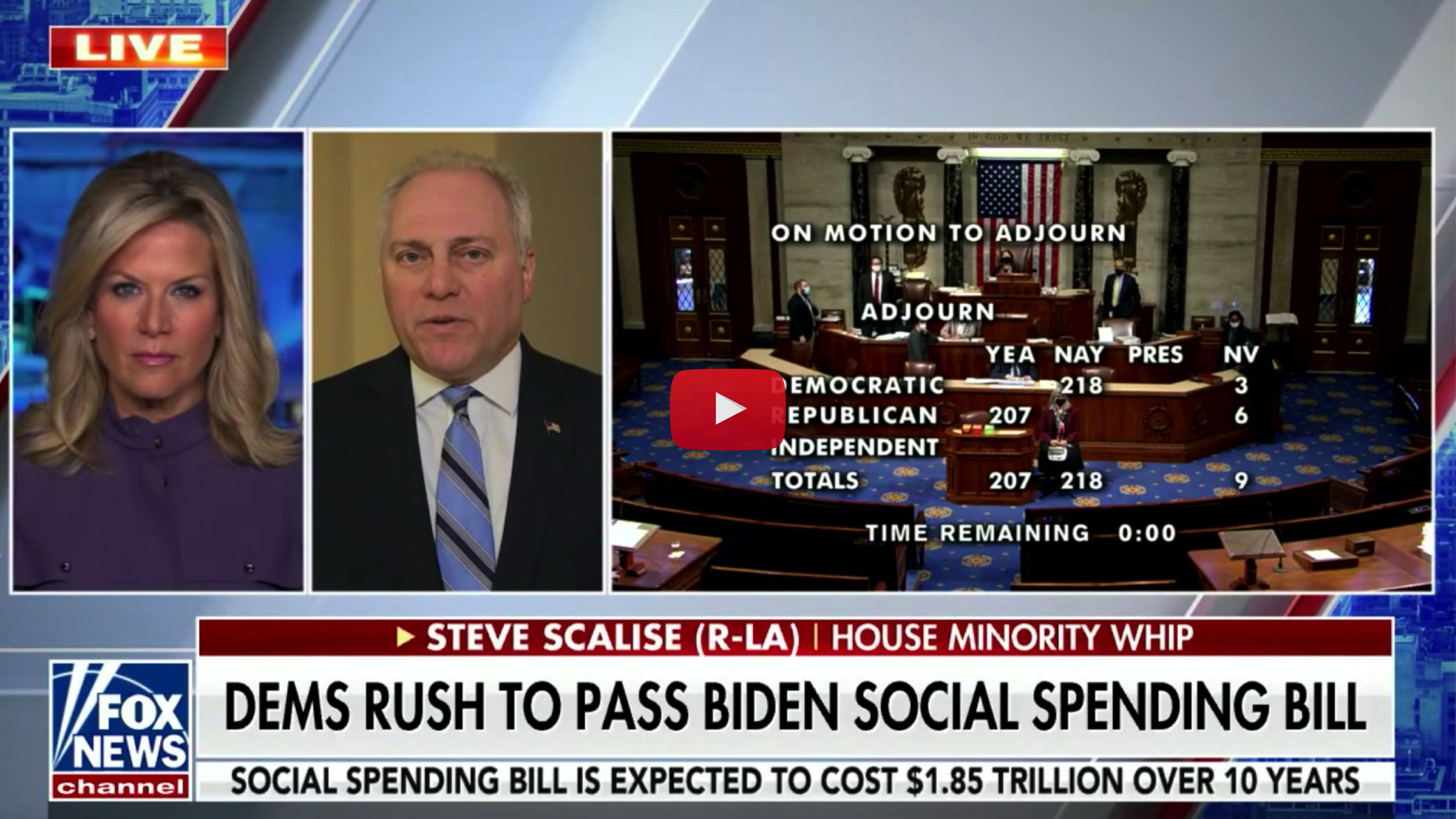 “Well, Martha, it’s good to be back with you. And they still don’t have the votes and that’s the bottom line. When you’re talking about why they still haven’t gone to the floor, I would imagine shortly they’ll probably try to bring some sort of procedural motion, but still not the actual tax-and-spend bill.

“And that CBO score is a hold up for a good reason. The Wharton report is very damning in terms of how bad it would be for the economy. $4 trillion not $1.5 trillion in new spending. And the voters in Virginia said one thing loud and clear: They’re tired of all the spending in Washington because that’s what’s driving inflation. We don’t need more inflation with $4 trillion in taxes and spending let alone all the taxes on things like natural gas. You see these payments to illegals. $450,000 [to] illegal [immigrants] and then they’re going to put amnesty in that tax-and-spend bill.

“Those are the things people are revolting against. It’s why they don’t have the votes and when the score comes out, it’s only going to make things worse. So, I don’t think they’re going to pass it today, but they’re going to keep trying. You know, maybe they should be handing out slings over there in the Speaker’s Office for all the arms they’re twisting, but they’re not there.”

On voters rejecting the Democrats’ agenda:

“[Democrats] misread last year’s election. You’ve seen the socialists – Bernie Sanders was defeated in the primary, and yet Bernie Sanders is driving the agenda –  he is the Budget Chairman and this is a budget process. They’re going through approaching it much more as if it’s Bernie Sanders, not the way Joe Biden [that] ran.

“But for Pete Buttigieg to say this is popular. If it was popular Terry McAuliffe would have just been elected governor on Tuesday night, and instead, he took a thumping in a blue state because people are tired of all the spending in Washington. They don’t want $4 trillion more in spending, they actually want to roll back the trillions that have already been spent that are jacking up inflation. That are raising gas prices.

“You saw their [Energy] Secretary laughing at the thought of increasing [energy] production in America when that’s the problem. They have shut off production in America while they’re begging OPEC to produce more oil. People don’t want to pay $150 or more to fill up their car for gasoline. Yet, that’s what they’re doing, and it seems like President Biden and Speaker Pelosi are tone-deaf to what’s going on in the real world and it’s costing them.”

“Yeah, [the Biden Administration] gave away that magic wand to OPEC. We were energy independent, [but] they killed the Keystone pipeline. They put a ban on drilling on federal lands. And then you’re going to beg OPEC? OPEC said no for a reason. They want higher gas prices. It helps OPEC, but it hurts families in America.

“By the way, it’s the lower-income families that are hit the hardest by President Biden’s inflation tax that he created himself. He can reverse it. He just doesn’t want to because the far left won’t let him.”