WASHINGTON, D.C. — Today, House Republican Whip Steve Scalise (R-La.) joined Fox Business Network’s Mornings with Maria to discuss how President Biden is refusing to take responsibility for his far-left policies that have led to soaring inflation and skyrocketing gas prices. Whip Scalise urged President Biden to end his war on American energy and stop blaming U.S. energy producers for an energy crisis that was created by Democrats’ big government socialist agenda. Additionally, Whip Scalise reflected on the Congressional Baseball Shooting, which happened five years ago this week, and in light of an armed man being arrested near Justice Kavanaugh’s home after intending to kill him, condemned Democrats for encouraging the protests outside his home just weeks ago. 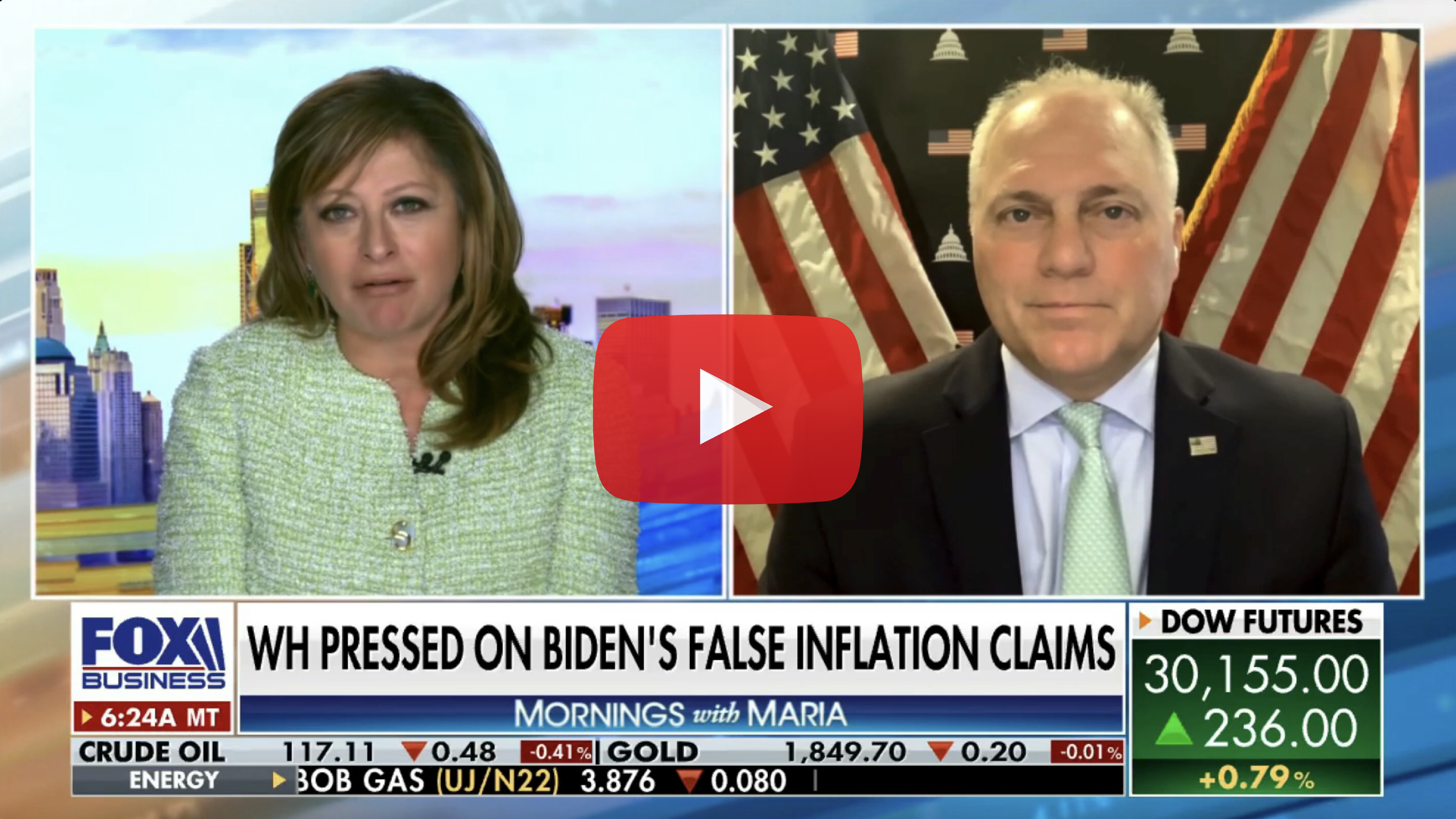 “This is a disturbing pattern we’ve seen from President Biden on so many of the problems that he’s created that are hurting families. He just blames everybody else. Maybe they don’t have mirrors in the White House. But he’s looking around, and he’s pointing fingers. He’s throwing spaghetti at the walls, and nobody’s buying it because they’re watching his policies destroy so many parts of the fabric of the country.

“Look at gasoline prices. Gee wiz. Over 100 percent higher than when [President] Biden took office. That’s more than double – over $5 a gallon.

“And look at the long list that he’s blamed instead of himself for that. It was Putin. It was the oil companies. It was the pandemic, and he’s blamed refineries. He supported a bill that [was] passed by Speaker Pelosi to allow you to sue your local gas station if you don’t like the price. The only thing they haven’t done is support increasing production in America.

“You know, he’s going to fly to Saudi Arabia, fly 5,700 miles on Air Force One. Who knows what the carbon footprint of that flight is going to be to beg them to produce more oil? But he won’t let American companies produce oil here.

“He [doesn’t] even have to fly less than a thousand miles to Port Fourchon, Louisiana, where they would say, ‘Yes, we’ll drill here in America, lower emissions, [provide] more money for America, [and] lower gas prices at the pump.’ But he says no to that, and then he thinks that he can blame other people.

“Everyone knows it’s [President] Biden’s policies that are creating these dramatically higher prices than we’re seeing anywhere else and surely what we paid just two years ago when we had a great, robust energy policy.”

“These regulating agencies and the financial agencies – the SEC, the CFPB, the whole alphabet soup of federal agencies – are coming after energy companies. We had the heads of the oil and gas companies before the Energy and Commerce Committee a few weeks ago. I asked the head of Exxon Mobil as well as all the other heads. I held up a list of the mountains of regulations that [President] Biden’s put against American energy, and I said, ‘Is this hurting your ability to produce more and lower the price of gasoline?’ And they all said, ‘Yes, of course, it is.’

“And [President] Biden won’t reverse that. He campaigned saying he was going to end drilling in America. He bragged about it, and then he’s given [Congresswoman Ocasio-Cortez], [Senator] Sanders, [Senator] Warren, all the radicals in Washington, he’s turned the policy over to them to go after American companies, like energy companies. And then the prices went through the roof and people got really angry, and he tried to blame everybody else. It’s [President] Biden’s policies. Everybody knows that. He can change these policies today. He just won’t because he’s beholden to the radical left.”

On President Biden refusing to condemn the death threats and violence against Supreme Court Justices:

“God performed miracles that day. There were real-life heroes on the ballfield that day that kept me and over a dozen other Members of Congress alive when this gunman went out on the ballfield, and his goal was to kill every Republican. And because law enforcement was there, Capitol Police, Virginia police – with guns – they [encountered] the shooter, and they took him down and that’s why we’re alive today.

“So, when you see the Democrats talking about defunding the police and going after law-abiding gun owners, you know, it just shows you what their agenda is [and] how out of touch it is. Why hasn’t President Biden, as you pointed out, spoken out against this death threat against this Supreme Court Justice and attempt to undermine democracy?

“But also, every single day, there [are] violations of federal law because federal law says you can’t go to the home of a judge to try to threaten or bully them or intimidate them to change their view on an issue that’s before them. And yet, it’s happening every day in front of multiple Justices’ houses, and [Attorney General] Garland, the entire Justice Department [are] just sitting idle. They need to confront this as well because you’re seeing the dangers that could come.”