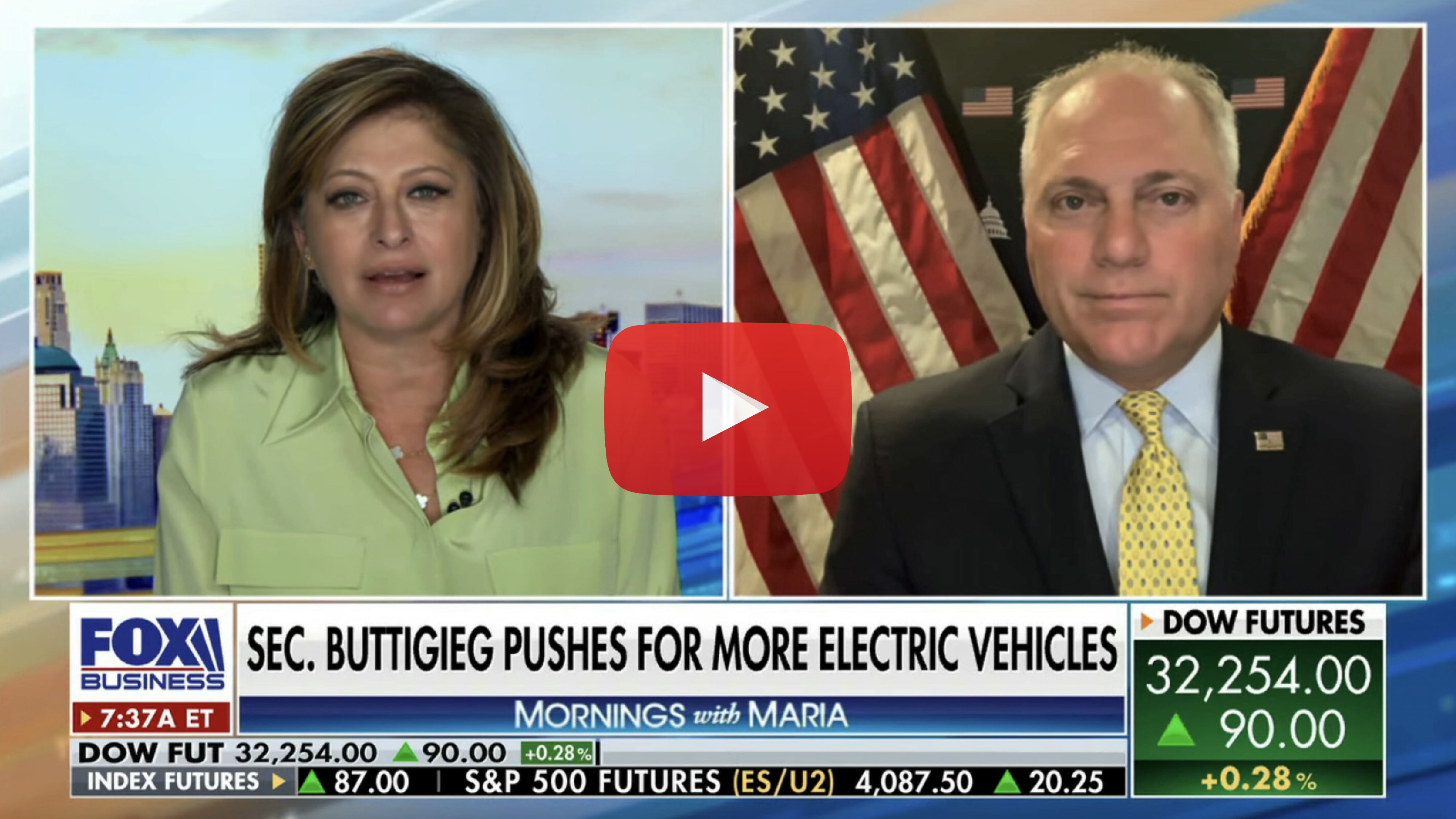 “[Democrats’ ban on gas-powered vehicles] is clueless. It’s so out of touch with reality. I mean, look, probably about 95 percent of the cars on the road today are not electric. And even if you went to 10 to 15 percent, most of your electric companies tell you they can’t handle it on the grid. You’ve got to plug this into something. You’re not plugging your car into a tree to get that energy.

“And so, if the local electric grids that everybody lives in couldn’t handle it, you know, imagine getting home at 7:00 at night, people are making dinner, and boom, you have power outages all around because you have 40 percent electric cars – we couldn’t handle 20 percent.

“Look, this idea that you can just stop using gas-powered cars – California is the example of what happens when you have radical policies. They’re having blackouts as they’re mandating electric cars. And there’s [Transportation Secretary] Buttigieg, with the Biden Administration, saying that’s what they want for the nation. Blackouts with mandates like this make absolutely no sense. They’re out of touch with reality.”

On Democrats pressuring the private sector to adopt their extreme climate policies:

“You know, they’re pushing [their radical climate agenda] from every angle. Like you said, ESG coming from financial institutions, you’ve got bans on [gas-powered] cars coming from [Secretary Buttigieg’s] side of the Biden Administration. Look at where it’s getting us. I mean, prices are still over 40 percent higher than they were when [President] Biden took office.

“But forget about the politics of it. Look at the science of it. They love talking about science until you confront them, Maria, with science. What their policies have done has made us more dependent on countries like Russia. Look at what Russia is doing to Europe right now on energy policy. They’re crushing all of Europe because Europe allowed Russia to become dominant because they shut their energy supply down. Let’s not do that to America, but they’re doing it.

“[It] means higher carbon emissions, by the way, because Russia doesn’t make energy as clean as us – no one in the world makes it as clean as us – yet they’re shutting down the cleanest country in the world, and they’re making our country and other countries like European countries more dependent on Russian oil. This is crazy. It’s enriching Putin.

“Putin loves it, by the way. If you want to help Vladimir Putin, go and put [President Biden’s] energy policy in place all across the world. I sure don’t want that. Why would [President] Biden or anyone else in America want that?”

On the upcoming midterm elections:

“I share Leader McCarthy’s assessment on where things are, and look, I’ve been to over 25 different congressional districts in these last few weeks. And what you see in swing districts is an anger against the Biden Administration’s policies because it’s hurting families. It’s hurting lower and middle-income families the most, by the way, whether it’s all of these radical policies that are increasing the cost of things we buy.

“So, I think we’re going to win in a lot of places all across the country. places we haven’t won in a long time, like what you saw with Mayra Flores, on the border between Texas and Mexico, [a] phenomenal new Member of Congress now, but we hadn’t won there in 150 years, and I think you’re going to see races like that where people just say, ‘We [are] fed up with what these far left socialists have done to our country, and they want to keep doing it.’ You heard [Transportation Secretary] Buttigieg, you heard [Treasury Secretary] Yellin, all of [President] Biden’s acolytes want to keep inflicting pain on families to carry out some utopian agenda that’s not even working.

“Again, science goes against them because China is thriving when we shut down manufacturing in America, Russia thrives when he shut down oil production, and it’s hurting people. When we get colder winters, I’m sure they’ll blame that on climate change, too, because we never had cold winters before, but people won’t be able to afford to heat their homes in the winter. That will be the new thing that happens because of their policies, and people can only blame the Biden Administration. We didn’t have this problem just two years ago. We should reverse these ridiculous policies that are crushing lower and middle-income families.”

“We’re going to roll out a ‘Commitment to America’ in a few weeks that shows the country how a Republican majority would solve these problems that [President] Biden has created that are hurting families. We’re going to be fighting for those hardworking taxpayers that are feeling the crunch from [President Biden’s] radical agenda.”