Whip Scalise also criticized the Biden Administration for being more focused on implementing its radical Green New Deal agenda instead of lowering gas prices for hard-working families; called out President Biden for his out-of-control spending, which has led to an unprecedented increase in inflation; and blasted the President’s open-door immigration policies that have encouraged hundreds of thousands of migrants to illegally enter the United States. In addition, Whip Scalise implored Speaker Pelosi to bring S. 301 to the House Floor for a vote. This legislation gives state and local leaders the ability to spend unused COVID relief funding on infrastructure projects and passed the Senate last week by Unanimous Consent. 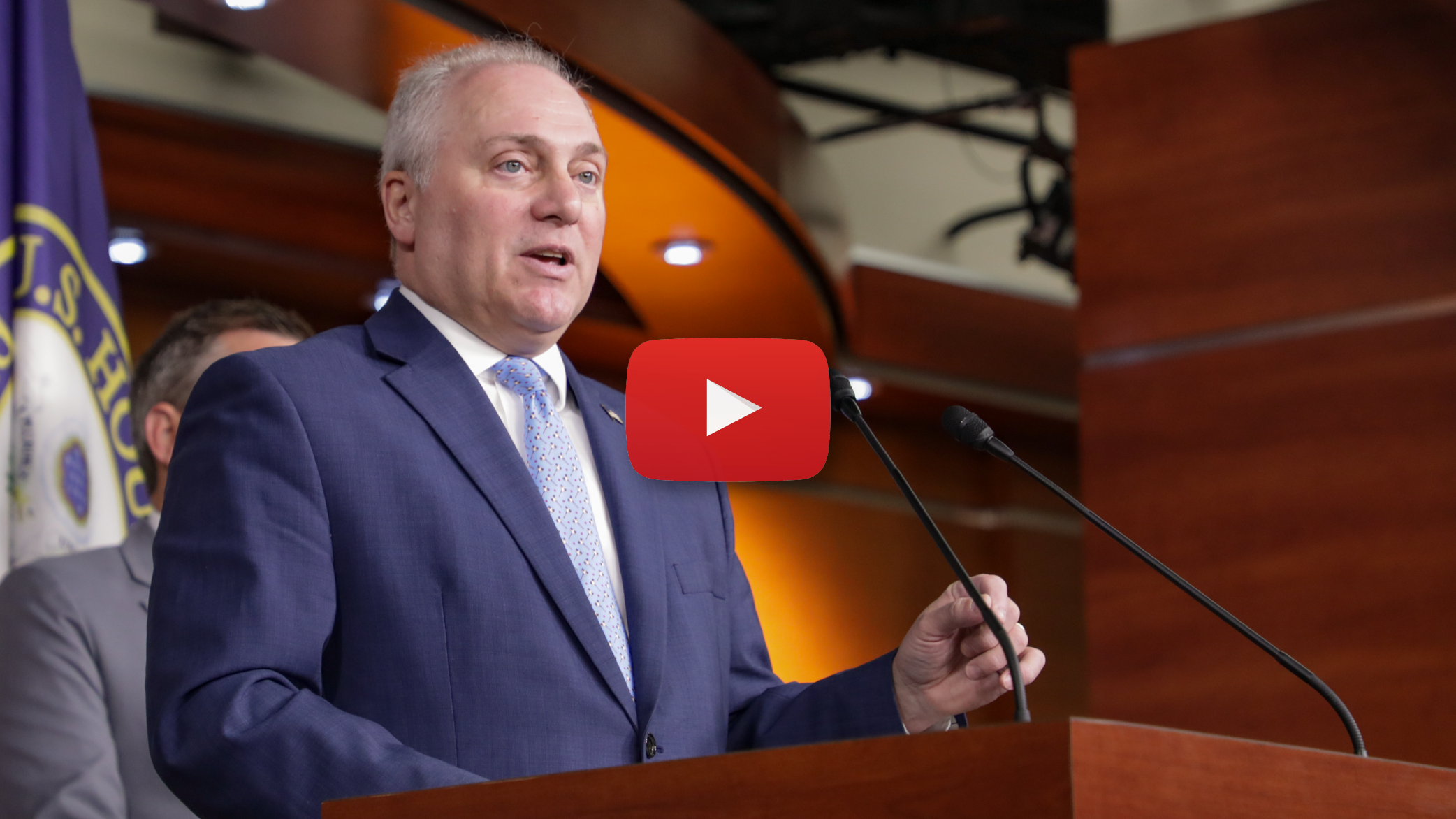 On how President Biden’s radical agenda is hurting American families:

“Hard-working families are paying the price for all of these crises that have been created by President Biden and his big government, socialist agenda that we’ve been seeing this whole year. Whether it’s the inflation that people are paying for every good and supply that they buy, when they go to the grocery store, when they try to renovate their houses, they’re waiting longer for things because of the supply chain crisis. They’re paying dramatically higher, over 40 percent more at the pump, because of the energy crisis that President Biden created. The border crisis continues to bring thousands of people a day across illegally, including people on the Terrorist Watch List. [The Biden Administration] won’t even be transparent about the numbers. How many illegal crossings, how many people on the Terrorist Watch List have come across our border because of the border crisis they created by all of their far-left items?”

On President Biden not having a plan to fix his energy crisis:

“And unfortunately, when you look just last week, President Biden did a town hall meeting, and he was asked what his answer is on the energy crisis. How was he going to lower gas prices for families who were paying, in some cases, a hundred dollars to fill up their car? And then, their credit card maxes out at a hundred dollars at the pump, and they can’t even fill up their car on a hundred dollars. And when the President was asked what his answer is, he said that he doesn’t have a short-term answer. I think that [it’s] embarrassing that the President of the United States, when confronted with the biggest crisis that families are facing that he created, says that he doesn’t have an answer to that problem. Well, the good news is House Republicans do. We have an answer to that crisis.”

On the need to reverse the Biden Administration’s costly green energy policies and bring back American energy dominance:

“As [Congressman Armstrong] talked about, let’s just get back to the things that were working. We were an energy dominant nation when Joe Biden took the oath of office. Gas prices were less than $2 a gallon. People harken back to those days. It wasn’t that long ago that they were paying less than $2 a gallon for gasoline. Today, in some states, it’s over $5 a gallon because Joe Biden, [on] day one, said he [wanted] to cancel the Keystone pipeline, but he green-lighted a pipeline for Russia. He canceled production and leases on federal lands here in America, but then he went and begged OPEC and Russia to produce more oil.

“And by the way, if this was all about carbon emissions because you’re going to see later this week, the President get on a plane and head off to Europe. And his biggest priority is to be able to go to Europe with a massive tax-and-spend agreement so that he can go to brag to his European allies about how much he’s wrecking America’s economy with higher taxes, higher spending, and Green New Deal-type proposals that will make it more and more difficult for families to heat their home in the winter because of his natural gas tax, all in the name of saving the planet.”

“The only problem is the things that he’s doing are increasing carbon emissions because when he’s shutting down American energy production and begging OPEC to produce more oil, OPEC actually has a higher carbon emission rate to produce the same oil that we produce here in America because we have higher standards. If you want to lower carbon emissions, America was doing that before Joe Biden took the oath of office. We were actually lowering our emission standards. You look at China, they’re building 300 coal plants this year. We should be making more things in America. We should be producing more energy here in America. It lowers the cost of emissions, but it also lowers the cost for families who are paying too much.”

“And they’re fed up with all of the inflation that’s [being] brought on by all of these socialist policies coming out of Washington. And [the Democrats’] answer is to double down and do even more of it this week with their proposals to spend trillions of dollars and raise trillions in new taxes. And by the way, a lot of those taxes are going to be paid for by middle and lower-income families, the natural gas tax in their bill will be a tax on every family who uses natural gas. [Families will see] probably 15 percent more in their electric bill every single month.

“The inflation tax, because inflation is a tax that’s brought on by Joe Biden’s massive spending that hits lower-income families the hardest. And so, what we’re saying is, ‘Stop this madness. Work with Republicans to actually confront some of these crises because while President Biden doesn’t have an answer, we do.’”

“And just look at infrastructure. While they’re holding infrastructure hostage to this multi-trillion-dollar bill that as [Chief Deputy Whip] Ferguson said, among other things, creates an army of new IRS agents. We’re not saying they’re going to have over 80,000 IRS agents. In their bill, they’re adding over 80,000 more IRS agents to, among other things, try to snoop on people’s spending. If you make over $10,000 a year, a senior on a fixed income would fall into that new trap. That is not what Washington should be doing.”

On the Senate Passing Legislation to Allow States to Spend Unused COVID Relief Money on Infrastructure:

“There was a bill that came out of the Senate unanimously last week, by the way, [a] bill by Senator Cornyn passed unanimously that frees up over $120 billion that’s already sitting [frozen] in state bank accounts. [This bill] would allow those states to use that money on infrastructure today. Not having to go through federal agencies here in Washington, but actually allowing those states to have over $120 billion freed up today to do real infrastructure.

“We’re asking Speaker Pelosi to bring that bill to the floor. And again, that’s a bill that last week passed unanimously out of the Senate [with support from] every Republican and every Democrat. That’s bipartisan infrastructure that’s not held hostage to more big government socialism. Those are the kinds of things that we should be doing up here while President of Biden goes off to Europe to talk about how he’s raising taxes and raising spending here in America.”