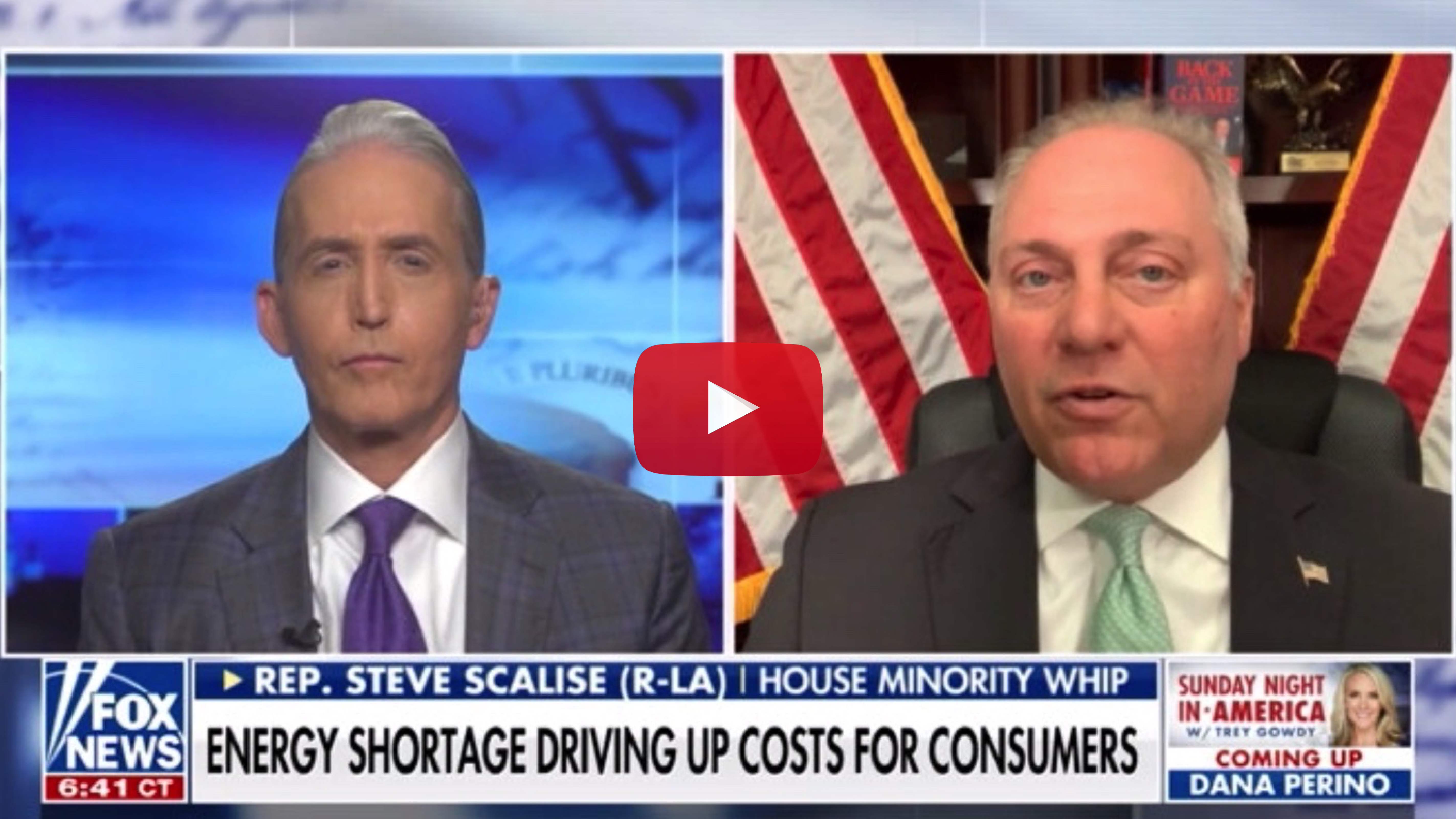 On how President Biden is responsible for disruptions in the United States’ supply chain and the lack of affordable energy:

“Look, Secretary Buttigieg is out there trying to promote this massive multi-trillion-dollar tax and spend package.  You know?

“So, as you pointed out, President Biden comes in kills the Keystone pipeline, and all the jobs that [go] with it, puts a moratorium on drilling in America, but then begs OPEC and Russia to drill more. How crazy is that? And by the way, if it was about global warming and saving the planet, we do it better than anywhere else in the world. And so, if you’re going to make energy, you should want to make more here. If you make products, make more of them here. But because we’re not, we’re more dependent on foreign countries and they’re limiting the supply chain. It’s why things cost more. It’s why we can’t get the goods we need. If you want to buy a microwave oven and you’re going to pay 30 percent more and, you’re probably going to wait six months to get it because President Biden has completely flipped this upside down and created this problem.”

On how the Biden Administration’s far-left policies are creating a potential energy shortage:

“Well, let’s get back to what was working. You know, when President Biden walked in the door, we were energy independent. We run not only making enough for America’s needs. We were exporting to our friends around the world. And so countries that are allies of America could get their energy from us. That’s changing. Now, they’ve got to get it from enemies like Russia. Russia, exerts political influence, by the way, when they send you energy. Whether it’s heating during a cold winter.

“So, those are the sort of things where President Biden went out and the far-left pulled him so far to where they said, ‘Let’s kill American energy.’ But they exempt China from all of these regulations. And then they beg OPEC to produce more. It’s been a gift to OPEC. It’s been a gift to China, but it’s crushed hard-working families. And by the way, Trey, it’s the low-income families that pay the biggest price for the [spike in] inflation that we’re seeing right now.”

On Washington Democrats’ disdain for Louisiana’s oil and gas industry:

“You know, it’s this kind of elitist Washington attitude that [says], ‘Don’t worry. You’ve got a great career making over $100,000 a year producing American energy in South Louisiana. But, you can go and install solar panels.’Which by the way, you’re probably going to be making 40 percent less.’ And go look at what they did with Solyndra. A lot of those solar panels are made in China. When the [Obama] Administration – back when he was Vice President – gave $500 million of taxpayer money to Solyndra, the company went bankrupt in just a few months and the taxpayers lost all that money. In this package of bills, they have over $100 billion dollars in Solyndra-style slush funds to give out money to their friends while crushing the jobs of those hard-working families in South Louisiana. Those union workers who were going to be building the Keystone pipeline all throughout middle America. Those are the jobs that we’re losing and China is [the] winner. It’s the most perplexing, crazy, radical policy I’ve ever seen.”