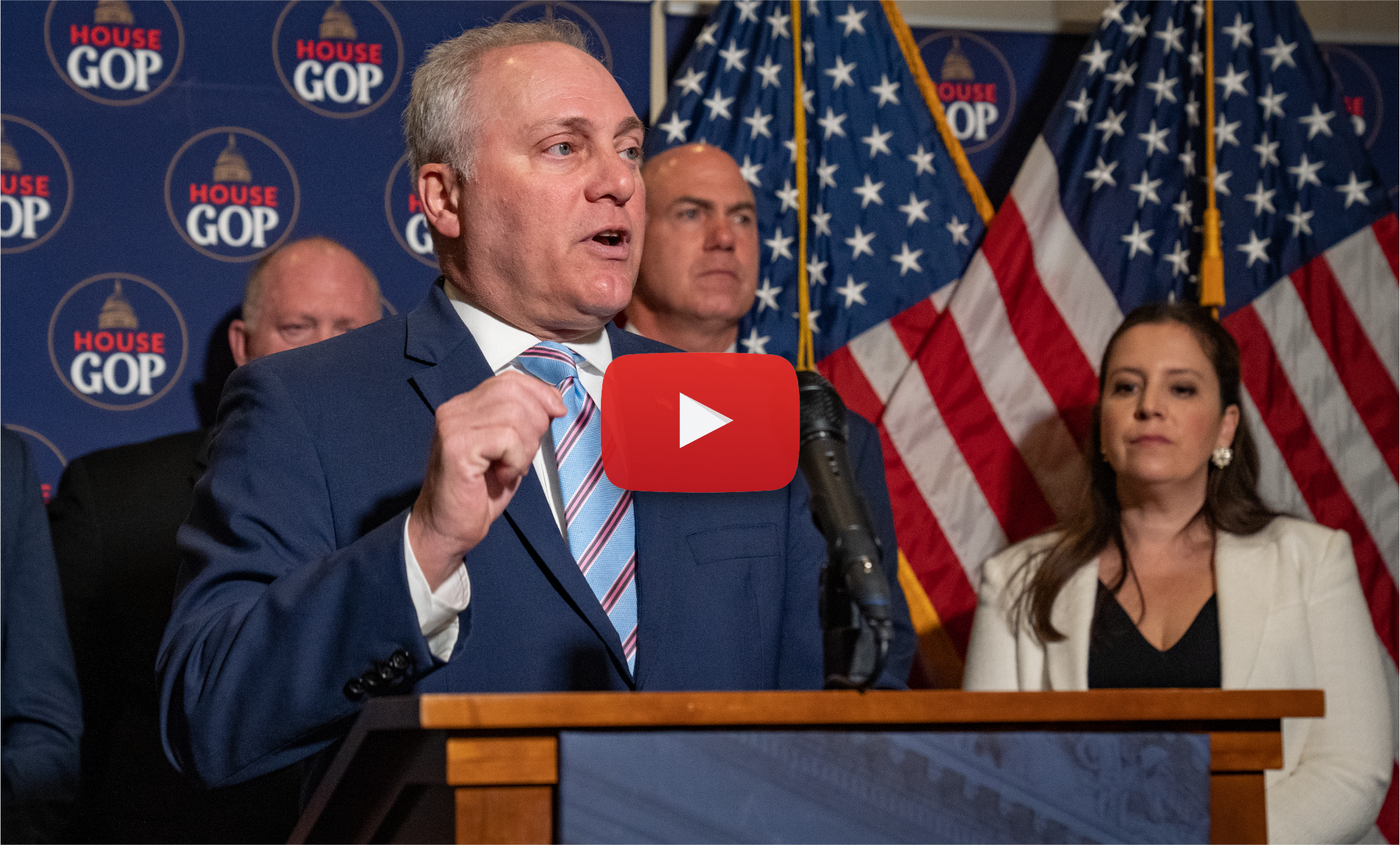 Click here or on the image above to view Whip Scalise’s remarks.
On President Biden creating the worst border crisis in American history:“I thank everybody who participated because America’s southern border is under siege, and it is a national crisis. As been said by many, Tom and others, ‘Border security is national security,’ and it’s at risk right now because [President] Biden turned operational control of our southern border over to the drug cartels.“He did it deliberately. He started [on] day one when he stopped building the wall, and he got rid of the policies that were working – ‘Remain in Mexico,’ the Northern Triangle agreements – these were all protocols that allowed a legal process of immigration to start working again. And it’s completely unwound.”On illegal immigrants and terrorists taking advantage of Democrats’ open-door immigration policies:  “Unwound to the point where we’ve had over 2.5 million people come into our country illegally that we caught. That’s larger than the city of Houston, Texas, the fourth-largest city in America. More people have come in that we’ve caught. And as has been pointed out, at least 700,000 [illegal immigrants] that we know of that got away.“Dozens of people we caught were on the Terrorist Watch List. Which begs the question, ‘How many more came in that weren’t caught that are on the Terrorist Watch List?’ We’re not just talking about South and Central American countries. We’re talking about over 160 different countries [that] are represented – that we know of – who’ve come across our southern border illegally since Joe Biden opened it up when he became President.”On the Biden Administration sidelining Border Patrol agents: “I went down there, like a majority of my Republican colleagues have gone down to the border. We got to embed with our Border Patrol agents, and they’ll tell you what the problems are. But they’ll also tell you they know how to fix the problem. The real thing that frustrates most people in this country when they’re watching this border crisis is that [President] Biden is the one who took the Border Patrol agents off of patrolling the border. [He] won’t let them do their job. [He] literally gave them stand-down orders. We saw many Border Patrol agents over at some of these detention facilities, changing diapers and giving processing papers to people to be sent to other states. We don’t even know where they’re going.“We’ve asked those questions, by the way. I would hope the press asked those questions. How many people does the administration know have come in illegally, and where are they? Where have they been sent? Who’s in charge of keeping track of whether or not they’re even being followed around to know where they are? If they’re supposed to show up in court, and they miss their court dates – which by large percentage was we see happened to – this shouldn’t be happening in the United States of America, and there [are] lethal consequences.”On the fentanyl crisis negatively impacting America’s youth:“I think what angers most people is when they see that last year the largest cause of death amongst our young people in America was not COVID. Over 100,000 young people in America died from fentanyl and other drug overdoses from illegal drugs that have come across our open southern border since Joe Biden has been President. Over 100,000 young kids we’ve lost just last year, and the numbers this year [are] supposed to be worse. Every community has been affected by this.“I had a high school group in from my district not long ago, and I asked them, ‘How many of you know somebody who’s died of a drug overdose?’ Do you know every single kid raised his hand? Every single one. That’s going on all across America too. Everybody knows somebody in a community that’s been touched by fentanyl and other drugs made in China but brought across our southern border by these drug cartels, who, by the way, are making billions of dollars a month trafficking people into our country illegally. So, [President] Biden has created a multi-billion-dollar industry. Unfortunately, it’s the drug cartels of Mexico who are making that money because he opened the southern border.”On President Biden’s failure to secure the southern border:“This has to end. [President] Biden needs to do his job, secure our southern border, and protect America’s national security. We’re surely going to continue to fight for this to be fixed. We’re also going to continue to highlight just how bad it is because it is a national crisis, not just in Texas and other border states. But as we know, every state, now, is a border state because of what [President] Biden’s done to open up America’s southern border.”