WASHINGTON, D.C. — Today, House Republican Whip Steve Scalise (R-La.) joined Fox News Channel’s America Reports to discuss President Biden’s inaccurate and inflammatory voting rights speech in Atlanta, Georgia. Whip Scalise pointed out that anyone who is legally eligible to vote in the United States is able to vote. In addition, Whip Scalise slammed President Biden and Senate Democrats for wanting to abolish the filibuster to pass their radical legislation that would allow the federal government to take over state and local elections and open the door to massive voter fraud. Whip Scalise called on Democrats to abandon their political theatrics and start working on reversing their numerous self-made crises that are hurting American families, workers, and small businesses. 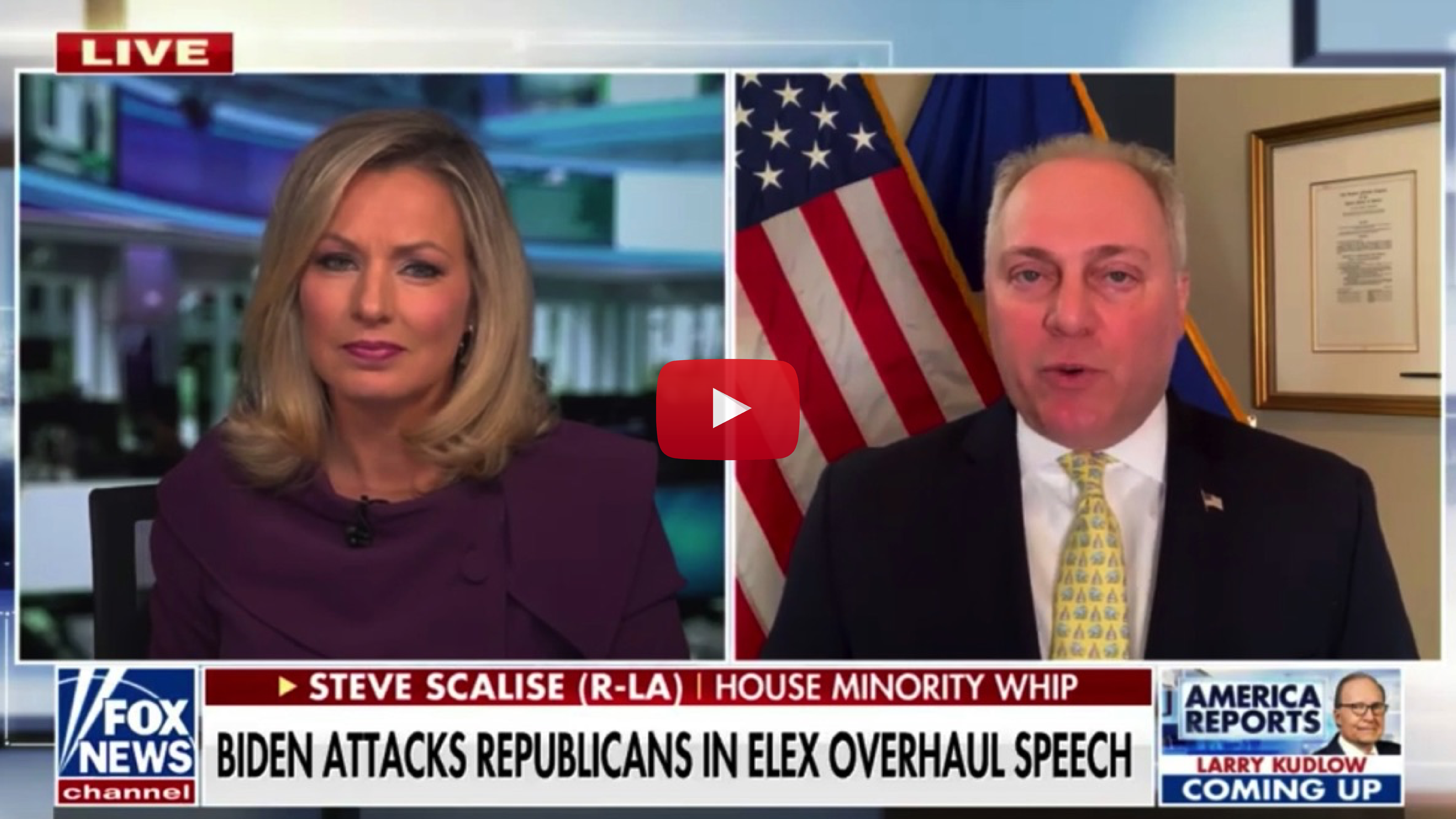 On President Biden’s error-laden and tone-deaf speech about voting rights in Georgia:

“Well, he said a lot of things that are inaccurate. If you look at The Washington Post in the past has given him ‘Four Pinocchios’ for [saying] similar things about election laws. If he thought it was so important that the filibuster should be blown up, he sure didn’t try to do that when he was in the United States Senate for multiple decades. But in the end, this is about the integrity of elections. And just think about this: in the midst of all these crises – inflation, high gas prices, a border crisis – go down the list that now families are facing, Joe Biden’s top priority is getting rid of picture ID and mandating same-day voter registration in every state in America, which opens the door by everybody’s account out to massive voter fraud. Why would he want to do that? Why is that his top priority? His top priority should be helping families who are struggling because of the failures of the Biden presidency.”

On if Senate Democrats will end the filibuster:

“I don’t think [the Senate is] going to get rid of the filibuster. And you’ve heard [Senator] Manchin and others saying they don’t want to get rid of it. But it’s just [really] interesting and telling what [President] Biden wants to blow up the Senate over. It’s over the ability for states to literally have their current laws reversed that ensure the integrity of elections.

“If you get rid of picture ID, which by the way, most voters support – go look at the state of New York – the voters of the state of New York rejected these [kinds] of changes just a few months ago in their statewide election. So, it’s not something the voters are crying for. It’s just some of the party bosses amongst the Democrats in Washington. Most people don’t want this. They want Washington focused on their problems like inflation, like high gas prices that Joe Biden created.”

“Well, whose side is Joe Biden on? Because when he goes to his home state of Delaware, they have more restrictive laws than the state of Georgia. I’ve never heard him express concern about those laws being changed in his own home state before. You know, he is going to states like Georgia misrepresent their laws. Again, he’s gotten ‘Four Pinocchios’ on the statements that he’s made about their laws.

“Ensuring the right of everybody who’s legally eligible to vote to be able to cast one vote in every election is something that we all fight for. Taking away picture ID and mandating same-day voter registration, and taking away the ability of states to ensure the integrity of the vote is a recipe for voter fraud. That’s not where most people want to go. And so I think Joe Biden should go back to his own home state and look at their laws and say, has he ever expressed concern about their laws? And he hasn’t.”