Additionally, Whip Scalise called out the Biden Administration for caving to teachers union bosses instead of listening to medical experts on whether or not students should return to school. Whip Scalise called on President Biden to find a solution to get students safely back in the classroom and pointed out that school districts across the country received billions of dollars in aid from the federal government so that schools could resume in-person learning only for the unions to vote to close schools down. Whip Scalise also blasted Democrats’ refusal to hold the Biden Administration accountable and investigate President Biden’s COVID failures. 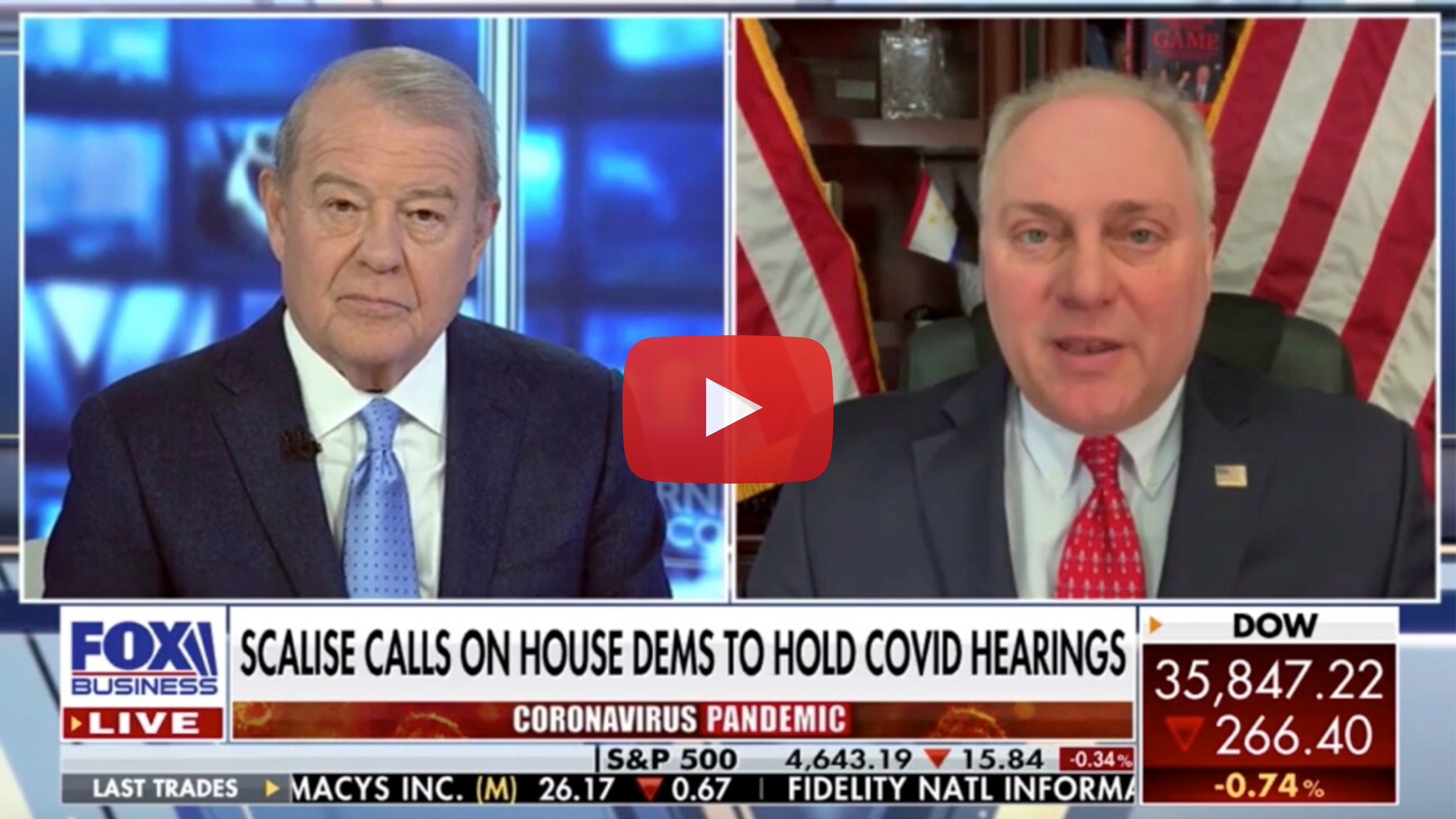 “Well, Stuart, great to be with you in this new year. But look, I mean, there have been so many failures by President Biden as it relates to COVID. We all remember he campaigned, saying, pledging, he was going to ‘shut down the virus.’ Those were his words. He walked in the door, took the oath of office, and inherited three different approved vaccines. President Trump’s Operation Warp Speed created those vaccines. President Biden has done nothing to enhance therapeutics. To look into things like ‘What is natural immunity?’ How much does that benefit people? They’re back to mandates again. He just got slammed yesterday by the Supreme Court because his plan – if you want to call it that – is unconstitutional, and it doesn’t involve helping families and helping things get [back] open.

“But Stuart, he was presented with a plan – at least there were reports that say this – in October to ramp up testing. And as you just reported, people are looking for testing kits. They’re waiting in lines for hours and hours at a time. In October, he was told, ‘More than likely around Christmas there will be another outbreak. We should order 750 million tests.’ And President Biden turned that plan down.

“What I’ve said is ‘We need to have a hearing to find out first of all, did this happen?’ The White House has been radio silent on it. But if it happened, who was involved in that decision? Who made the decision to not order those tests? Those people should be fired. He’s trying to fire our health care workers. He should be firing the incompetent people that have led us back to another outbreak of COVID. When he said he was going to ‘shut down the virus,’ President Biden has failed us on COVID on every front, and [Democrats] won’t have hearings on any of this stuff. I’m going to keep pushing for it. And frankly, I think the public wants to find out more information.”

“You look at school systems like Chicago, where the union bosses took over $2 billion of taxpayer money, and it was designed so that they could open up the schools and get the kids back in the classroom. And they said, ‘No, we’re going to keep the money, but we’re going shut down the schools again.’

“All the science says that kids ought to be back in schools. The data, by the way, shows kids aren’t learning at the same level if they’re not in the classroom, and yet they took billions of dollars and then shut the schools down. President Biden won’t stand up to the unions because he’s owned by the union bosses. In fact, it was his White House [that] manipulated a scientific report because the union said, ‘Wait a minute, it might show that we should be back in school.’ And the White House changed it to bow to the union bosses.

“You’ve got to pick a side. You’re going to be with the kids or the union bosses. Unfortunately, President Biden has chosen the union bosses over our kids, and people are fed up with that. You saw it in Virginia where people said, ‘I want to be involved in my kids’ education’ and parents deserve to. But they’re really, really angry right now that those unions took the money and are keeping their kids out of the schools.”

On Whip Scalise’s recovery from the Congressional Baseball Game practice shooting, where he nearly lost his life:

“I’m doing really well. I had physical therapy again yesterday. They keep working me, and I’m getting better all the time. I want to be running, you know, running the bases in baseball next year. But not quite there yet.”

Scalise and Fischbach: America is Ready for a World Without Roe v. Wade

One Year Under Biden: Authoritarianism and Failure