Whip Scalise emphasized that Democrats’ linked $5.5 trillion infrastructure and reconciliation package will continue to cause inflation to rise, which will result in higher gas prices and Americans paying more for groceries and everyday household items. Whip Scalise also called out House Democrats for refusing to investigate the origins of COVID-19 and Biden’s deadly Afghanistan withdrawal debacle. 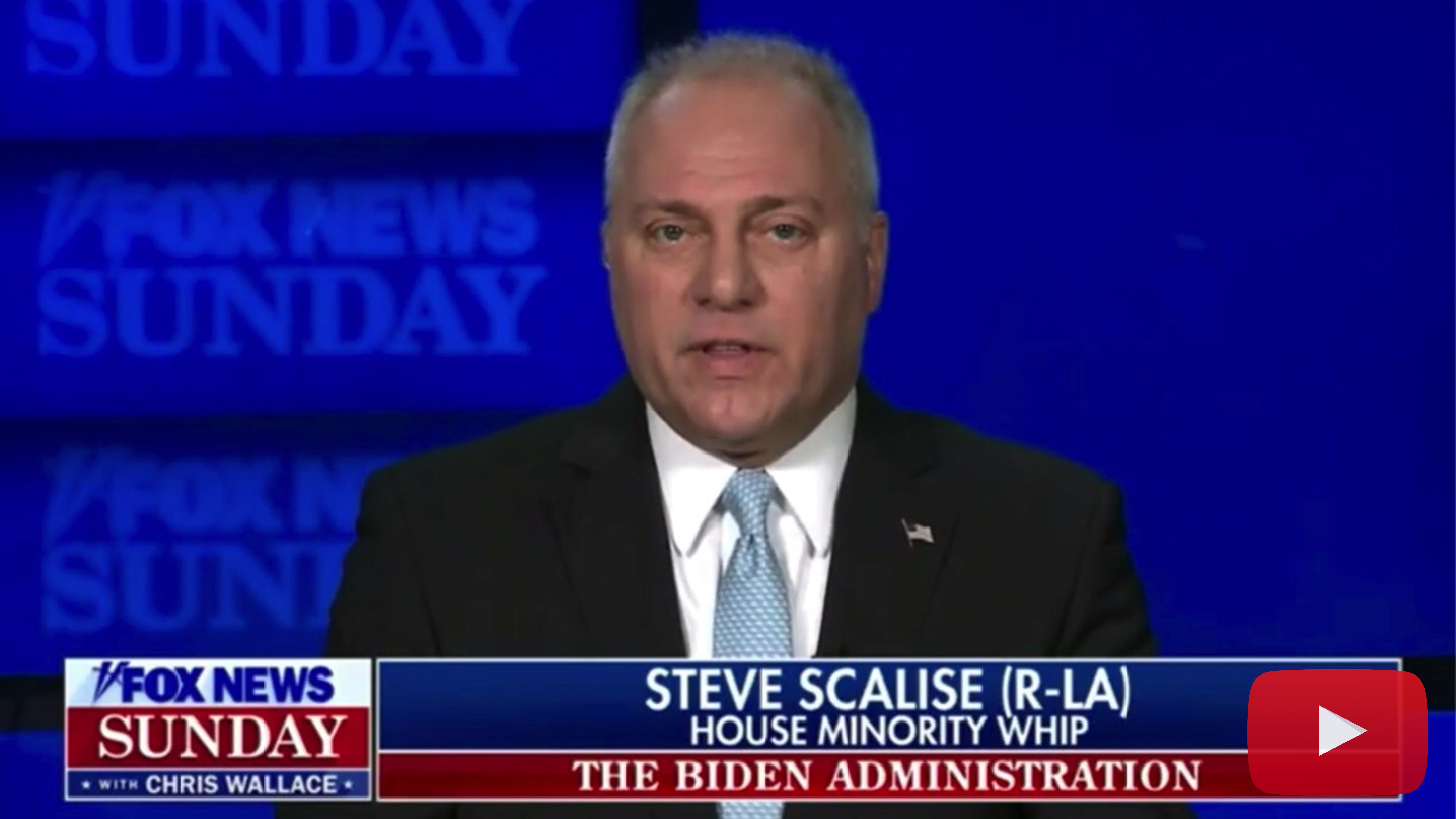 “If you look at all the policies under President Biden, I mean, the inflation that we are seeing, but paying people not to work is still a major drag on the economy. Some of the other welfare programs that they set up earlier this year – making it easier for people to stay at home rather than go get a job when every employer you talk to is looking for workers – and then [you put] on top of that the regulations that they keep adding. Agency after agency, going after small businesses, making it harder to keep the supply chain moving. All of those things are adding up, and they are all self-imposed by President Biden, who walked in with three vaccines and an economy primed to take off, and yet it’s been disappointment after disappointment every month because of this failed Biden agenda.”

“[Paying people not to work is] not the only thing that they added. They added a number of other welfare programs, and they got rid of the welfare-to-work requirements. You go back to Bill Clinton. It was a very successful tool to get people back into the workforce. Joe Biden helped undermine a lot of those successful efforts, too. So, it wasn’t just one thing. It was many things. They are all adding up and catching up with this economy. And again, he could reverse it right now, but he doesn’t want to. They keep doubling down on this far-left socialist agenda.”

On potential workforce shortages because of President Biden’s vaccine mandate:

“Well, and [United Airlines] also just laid off a large swath of people. And you’re seeing in a number of states where they have the mandates – hospital workers, for example, getting fired. Police officers leaving the job. What President Biden needs to be working on is, number one, get an FDA Commissioner. The fact that we are ten months in and he still doesn’t have an FDA Commissioner – it’s been called a rudderless ship over there. They’re not working on therapeutics. They’re not working on things to help us get through this.

“I mean, whatever the next wave is going to be, President Biden shouldn’t just be relying on the three vaccines that President Trump helped create with Operation Warp Speed. He should be going to the next step, and he hasn’t done that. And his own FDA, frankly, has been one of the problems. That’s where he needs to be focused [in] helping us get through not just where we are now but whatever might be coming down the road. And, in the meantime, they won’t hold China accountable. They won’t even have a hearing in Congress on where this virus originated, even though all the evidence points to the lab in Wuhan.”

On the infrastructure bill being tied with the $4.3 trillion tax-and-spending spree bill:

“Well, we’ve wanted a bipartisan infrastructure bill for a long time. But, on day one, when that infrastructure agreement was reached with senators, President Biden went behind their back, with Nancy Pelosi and Chuck Schumer, and tied the whole package to the multi-trillion-dollar tax and spend bill. And so now, you’ve got this package, and you saw the President just last week go to the Capitol again. He was supposed to close the deal, and instead, he made it very clear that the tax and spend multi-trillion-dollar bill is tied directly to the infrastructure bill. And it undermines the whole process.

“They really should be working with us on an infrastructure package that would pass overwhelmingly, but instead, they just have an insatiable appetite to raise taxes and spend more money. It would kill jobs. It would hit middle class families. You’re talking about a package of bills that would raise natural gas taxes, that would put more of these Green New Deal mandates that would raise energy prices even higher. We’ve got a 40 percent increase in gas [prices] at the pump. [The Biden Administration is] begging OPEC to produce more oil while they shut down the spigots in the United States. It makes absolutely no sense. It’s one of the reasons why families across America are revolting against the President’s radical agenda.”

“Look, we put together over a $450 billion infrastructure bill with roads, bridges, ports, waterways, all the things you’re talking about. That’s not where they want to go. And by the way, in this package, they have language that tells the [U.S. Army] Corps of Engineers [that] they can’t do projects if it benefits the oil and gas industry. Look, in my state, in South Louisiana, there are a lot of oil and gas jobs. We produce a lot of energy for the country. But that kind of language would actually make it unlikely that we would even get projects in our state and other states too because a lot of states are in the energy industry.

“They just seem to hate American energy – fossil fuel-based, especially – while they’re begging countries like OPEC to produce more oil, and they’re letting Russia build pipelines. They’re shutting off pipeline and energy production here. That language is in this package of bills. I wish it was out. I wish they’d negotiate with Republicans in the House. Sam Graves, the lead Republican on the Transportation Committee, has been wanting to negotiate a really good bipartisan package for a long time. They won’t even talk to him.

“So, they want to go it alone, and just count on a couple of Republicans, or do they want to get something that would actually really be good for the country without all this far-left stuff that’s raising costs, jacking up inflation? Inflation is one of the biggest drivers hurting our economy and hurting middle class families. Frankly, it’s a big tax on lower-income families. They should abandon that far-left socialist agenda and work with Republicans.”

“Well, first of all, these are legal issues. And you’ve got a number of people that have been subpoenaed, that are complying. They’re trying to comply. But it’s a legal process.

“And, you know, they’ve got attorneys. By the way, the House of Representatives, Speaker Pelosi, spent millions of taxpayer dollars hiring attorneys, too. And there are Justice Department cases moving forward. They’ve arrested hundreds of people.

“Look, they don’t want to spend any time investigating the origin of COVID. That, by the way, matters to the families of over 600,000 Americans [who died.] They don’t want to hold an investigation into what happened in Afghanistan, the complete botched withdrawal that led to 13 American soldiers dying. Why don’t they focus on getting our economy back on track, get an FDA commissioner to get COVID under control? They want to keep revisiting last year, the year before, and blaming Republicans for everything that they’ve done.”

On the need for states to properly follow the laws governing presidential elections:

“Well, Chris, I’ve been very clear from the beginning. If you look at a number of states, they didn’t follow their state-passed laws that govern the election for President. That is what the United States Constitution says. They don’t say that the states determine what the rules are. They say the state legislatures determine the rules, and in a number of states, they didn’t follow those legislative rules.

“And it’s not just irregularities. [There are] states that did not follow the laws set which the Constitution says they’re supposed to follow. When you see states like Georgia cleaning up some of the mess and people calling that ‘Jim Crow law,’ that’s a flat-out lie. I think more people are [standing up] against that sort of thing.”