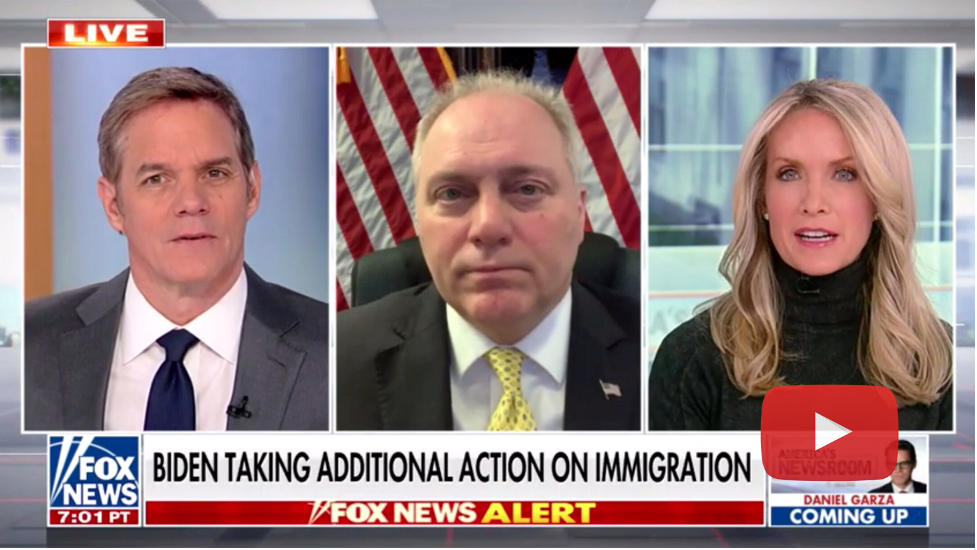 On President Biden’s misguided priorities regarding the Coronavirus vaccine distribution:

“First of all, think about this, in just President Biden’s first week and a half, two weeks in office, you know, we’ve seen [potentially] millions of jobs in America destroyed. But now you’re looking at his latest plan on the vaccine. He inherited a great plan from President Trump through Operation Warp Speed where we’re going to be vaccinating about 100 million Americans in the next 100 days, and what has President Biden done? First, we exposed that he was trying to prioritize Gitmo terrorists over Americans in getting the vaccine. They pulled back on that after we exposed it. But then now he is saying that people who came here illegally can jump ahead of other Americans who have been waiting to get the vaccine on that prioritization. So, what is this priority? I thought we were supposed to be looking out for hard working families. We’re trying to get our economies opened, we’re trying to get our schools safely reopened, and you do that by vaccinating everybody who wants to get the vaccine. Clearly, not everybody who wants to get it has been able to get that vaccine. And now President Biden is going to allow people who come here illegally to get the vaccine before some Americans who have been waiting for months. It’s mind-boggling that this is his plan. And, by the way, it sets back his 100-day plan because there’s only so much vaccine to go around.”

On the devastating impacts of President Biden’s ban on American energy production:

“It’s devastating for the hard-working families in South Louisiana. You know, you go down to Port Fourchon where they service a lot of the deep-water drilling in the Gulf of Mexico. These are really good jobs; these are careers for people who have been working in many cases second and third generation producing American energy. This is something that’s allowed us to lower energy costs, oh and by the way, our standards are so much better in America than these other countries these jobs will go to. It’s not like nobody will produce oil. It’s going to be a gift to countries like Russia, Venezuela, and by the way, carbon emissions are going to go up because those countries don’t have the good standards.

“We use the money in Louisiana to restore our coast. It’s a big environmental issue, rebuilding land that’s been lost over decades from the levying of the Mississippi River. That money comes from drilling in the Gulf of Mexico. Where is that going to go? So, there’s a lot of devastating impacts to families and to our environment in South Louisiana. And again, you can see the story playing out in so many other states. You just showed Texas, those families who are going to just be put out on the streets. You know, John Kerry can fly around on a private jet telling you not to fly on a commercial airliner. Where do you think that jet fuel is going to come from? It’s not just going to go away; they’re not going to put solar panels on those airplanes. It’s going to come from foreign countries, in many cases, who don’t even like America and who emit more carbon. So, you will increase global emissions and crush American jobs. Explain how that’s prioritizing Americans or the hard-working families who depend on it. The school systems who will lose money because those local communities are not getting that tax revenue. That money is now going to countries like Russia.”