Whip Scalise called out President Biden for his out-of-control spending, which has led to an unprecedented increase in inflation that has caused the price of everyday household items to skyrocket, and urged the President to abandon his reckless $5 trillion socialist grab bag reconciliation bill because it will raise taxes on hard-working American families and kill jobs. In addition, Whip Scalise criticized the crisis in Afghanistan that the Biden Administration created by withdrawing U.S. troops without an adequate plan to prevent the Taliban from taking over the country and slammed Democrats’ radical, abortion-on-demand policies. 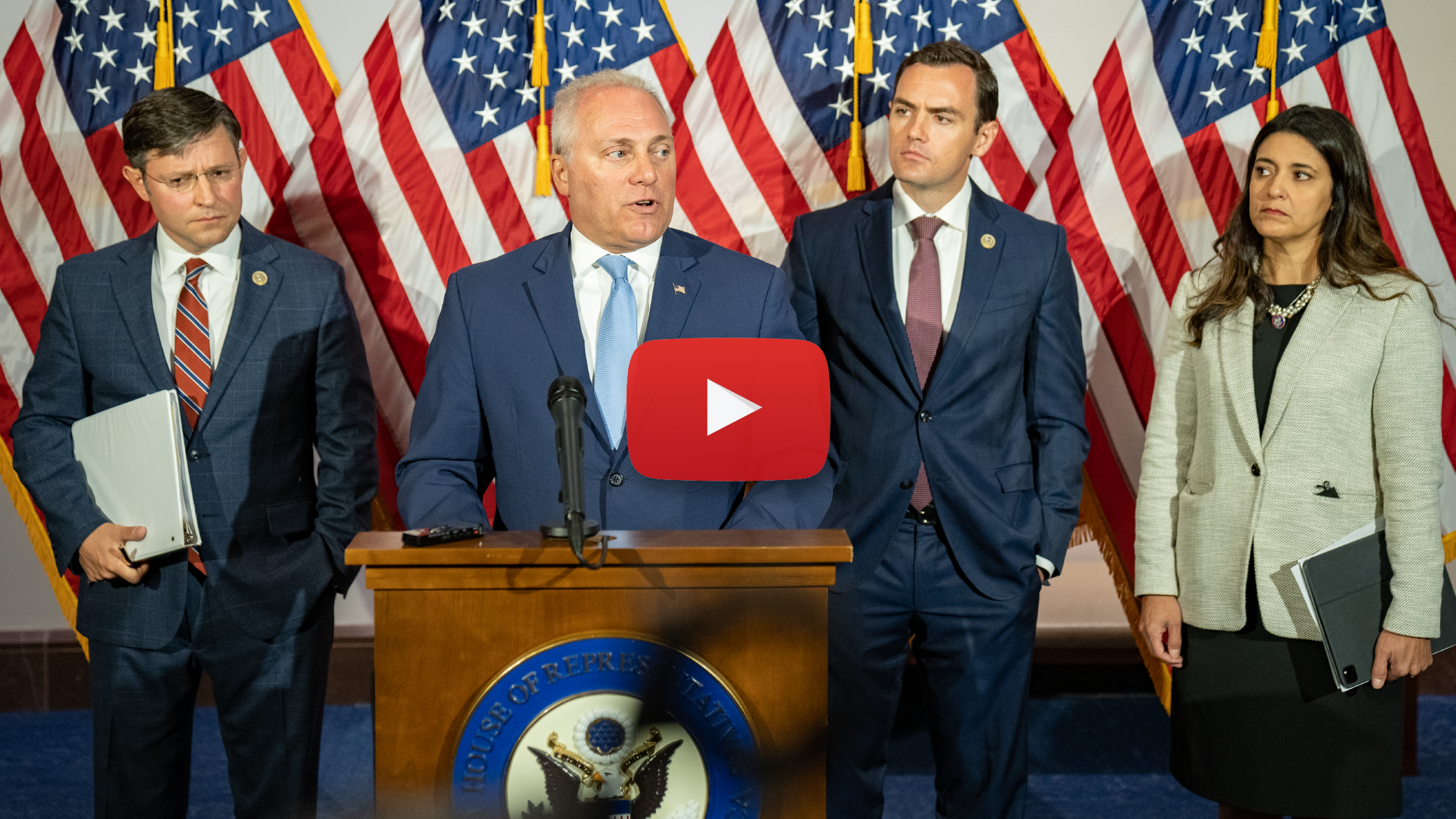 “If you look at all of the crises that we’ve seen in these last few months since President Biden took office, it’s been one thing after the other that have been self-imposed, self-created. On day one, President Biden killed the Keystone Pipeline, destroyed thousands of American jobs – and then [turned] around weeks later – and [approved] a Russian pipeline. So he kills jobs in America and Canada, and creates jobs in Russia, weakens America’s energy security. It’s one of the reasons that we’re seeing dramatic price increases at the pump that families are paying.”

“Then you look at what he did at the border. [On] day one, [President Biden] stops completion of the wall that President Trump was building – that was actually working. Gets rid of the ‘Remain in Mexico’ policy which has stopped the flow of illegals coming into our country by the thousands. And President Trump had already worked out negotiations with the Northern Triangle countries. President Biden got rid of all of those [policies] and now we’re seeing a massive crisis, an uncontrolled crisis at our southern border. And it’s important for a number of reasons.

“But, when you think about the national security implications, after the debacle of President Biden’s actions over in Afghanistan, he turned over a country to a terrorist organization. And [that] terrorist organization now has not only a training ground but a country that they’re in charge of with over $85 billion of the world’s most technologically advanced military equipment according to reports, which, by the way, the Biden Administration has not refuted. And you see the list of some of the things that President Biden gave to a terrorist organization, from C-130s to night-vision goggles to some of the most advanced military equipment.

“Then you go and look at the fact that we’ve actually captured people on the Terrorist Watch List coming across our southern border. These aren’t just people coming from Central and South American countries; it’s people coming from European, Asian countries, Middle Eastern countries. How many more terrorists are going to be trying to come across our open southern border until President Biden steps up and does his job at keeping Americans safe? He’s failed to do it.”

“And so, what is his answer this week and next week as you see an inflation crisis [which is] probably the biggest concern most Americans are expressing today? That they’re paying more money for everything, they’re buying, from gasoline to food at the grocery store, waiting months to get a microwave oven if they’re trying to upgrade their kitchen. He’s now going to bring a massive tax hike bill, a $5 trillion tax-and-spend bill, all masquerading as an infrastructure bill. People get that that will only increase inflation even more. And who’s going to get hit the hardest? It’s going to be hard-working families. It’s going to be the lower-income families.”

On how Democrats’ methane tax will hurt middle class families:

“You know, we had a number of markups. Twelve different committees last week had this package of bills come before the committee, over 160 hours of debate. Probably close to 100 amendments brought forward to try to get rid of these taxes that’ll hurt families. One of them was the natural gas tax. President Biden is trying to raise over $60 billion of new taxes on natural gas.”

On President Biden breaking his pledge not to raise taxes on families making less than $400,000:

“Now, I know during the campaign he promised people that if they made under $400,000, they wouldn’t pay a dime in new taxes. The only problem is President Biden breaks that promise to the American people with this bill because anybody that heats their home in the winter or cools their home in the summer with natural gas is going to pay more. Conservative estimates say [there will be] over [a] 12 percent increase in people’s household electricity bills because of President Biden’s new tax increase on natural gas. And when we tried to take that out and pointed out to Democrats that it would break President Biden’s promise, they voted on a party-line vote to keep that tax there. To keep taxing families with this new tax. And there’s a whole lot of other taxes that low-income families will pay, as well.”

On how President Biden’s far-left policies will raise healthcare costs:

“By the way, we tried to exempt hospitals from the tax because you know what? Hospitals will now have to pay more, which means they’re going to lead to higher healthcare costs. President Biden also promised he wouldn’t raise healthcare costs. That promise will be broken, too.”

“What we see is a failure of leadership and a series of broken promises. And this week, not only are they going to start that process of raising taxes that hard-working families will pay. In fact, many people making less than $100,000 a year will pay more in new taxes under this Biden tax increase plan. But, it will absolutely boost inflation even higher.

“Inflation, by the way, is the biggest new tax on low-income families, is already dramatically higher – 20, 30 percent higher for families – is going to get even higher if the federal government taxes and spends another $5 trillion.

“These are insurmountable debts that families cannot afford and shouldn’t have to afford. And we, on the Republican side, are going to continue to stand up for working families and fight against these radical policies.”

“Not only on the tax-and-spend side, not only trying to get our southern border under control but to defend innocent life. Which this administration, as they try to push abortion on demand, as [Congresswoman] Stephanie Bice just talked about, are trying to appease the most radical, far-left elements of their base instead of working for all of the American people.”

On President Biden breaking his promise to work with Republicans and unify the country:

“Again, one more broken promise by President Biden. He said he’d work with everybody, those who voted with him and those who voted against him. He’s yet to follow through on that promise. So, as we look at all of these broken promises, we’re going to continue fighting for those hard-working families on the Republican side.”