WASHINGTON, D.C. — House Republican Whip Steve Scalise (R-La.) joined Fox News Channel’s The Ingraham Angle last night to discuss how President Biden’s war on American energy and weak presence on the world stage has fueled Vladimir Putin’s violent invasion of Ukraine. Whip Scalise called out President Biden and Democrats for caving to teachers union bosses for years instead of listening to the science on whether students should be back in the classroom and wearing masks. Additionally, Whip Scalise urged President Biden to abandon his efforts to pass his multi-trillion-dollar tax and spending spree and start working on reversing his self-made crises that are hurting working and middle class families. 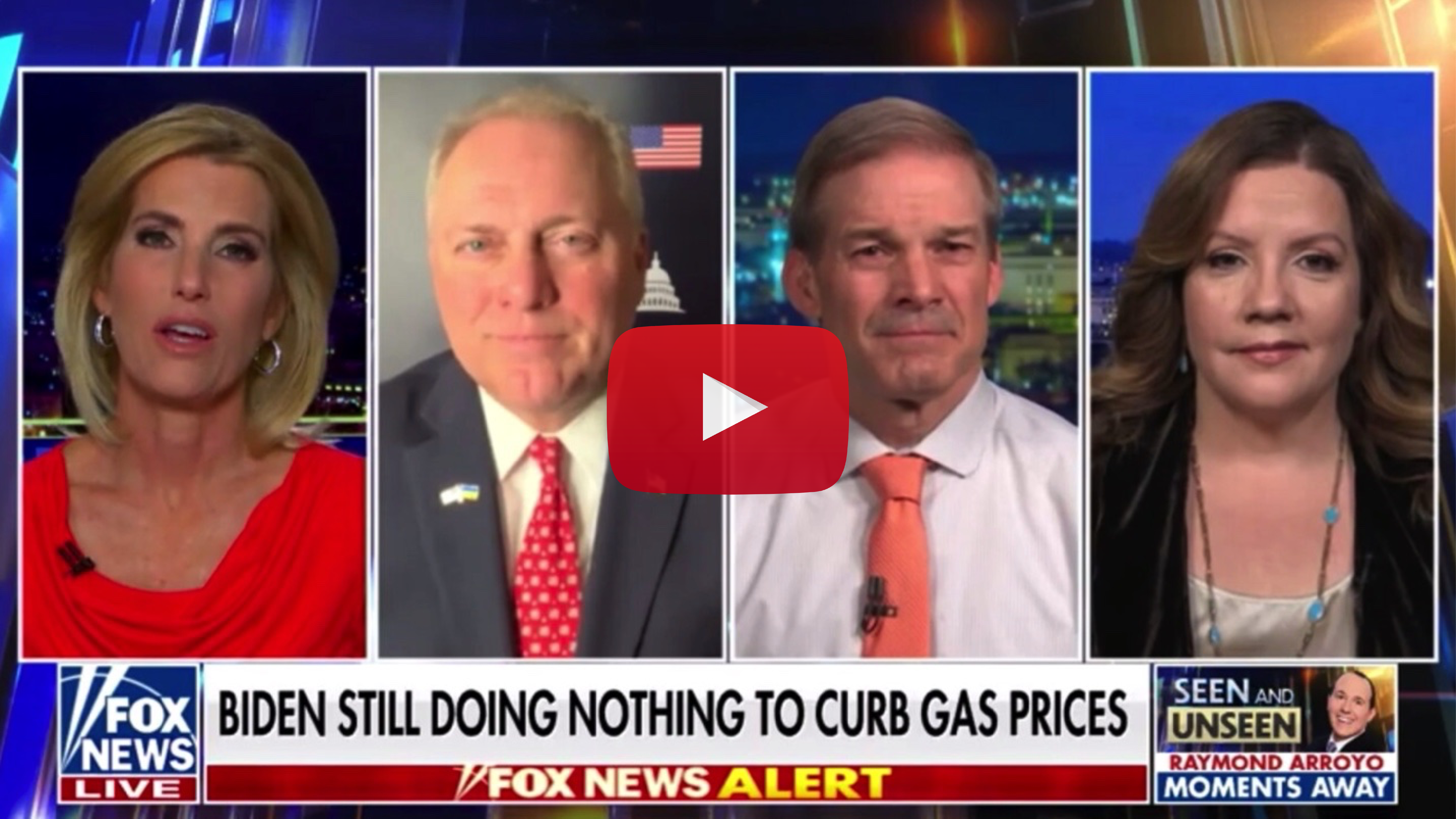 On President Biden’s war on American energy independence:“Look, there were a lot of delusional things [President Biden] said. What [Judiciary Committee Ranking Member] Jordan just said is accurate too. But on energy, it’s not raiding the Strategic Petroleum Reserve that’s going to move the needle. In fact, the last time he did it, prices went up because people [knew] that [was] not the solution. If you want to really undermine Putin, take away the money he’s making to go and invade Ukraine. Open up American energy. It was working really well under President Trump, but it also undermined Putin’s ability to have control over Europe. Biden gave him that leverage.“And by the way, Putin is making $700 million a day every day that he’s selling oil to the United States and Europe. We can take that leverage away by opening up American energy, not raiding the Strategic Petroleum Reserve, which would then run out and we would have no reserve left. Open up all the vast resources that we have – the abundant American resources – you will lower gas prices at the pump, and you’ll take billions of dollars out of Putin’s pocket so we can’t use it against the people of Ukraine.”On President Biden’s failure to protect Ukraine:“What parallel universe is [President Biden] living in? Keep in mind, Laura, this is the same President who said right when Afghanistan was about to fall that, ‘Afghanistan wasn’t going to fall.’ And within 48 hours, the Taliban had control of the entire country.“But if you look at what happened in Ukraine. Months ago, the [Ukrainian] government was asking America for help with surface-to-air missiles, for example. That was one of the things that they asked for months ago. Joe Biden said no. Imagine how different things would be today if Ukraine had those surface-to-air missiles? All the carpet bombing you’re seeing, cluster bombing of schools and daycare centers and hospitals – they would be able – the people of Ukraine – would be able to stop those planes and helicopters from coming in, but Joe Biden said no.“And he’s had a history of this. You know when he was with [President] Obama, and they were asking for tank-busting missiles, [President] Obama and [then-Vice President] Biden said no. It was President Trump who gave [the Ukrainian government] those Javelin missiles. Well, you fast forward, you go to what happened just in the last year. Joe Biden didn’t give him the arms that they needed. If he saw it coming, why didn’t he help the people of Ukraine? They’re trying to scramble to get things like Patriot or Stinger missiles in today, but there’s a war going on in the country. It’s kind of hard to get those arms in now. And by the way, you’d have to train the [Ukrainian] army how to use those Stinger missiles. That’s not working.”On President Biden, Democrats, and the mainstream media politicizing COVID:“You know, this is all about government control. They want to control your life. But again, he talked about unity, and we’ve got to stop treating it as a political weapon. This is the President – Joe Biden – whose administration called parents’ domestic terrorists’ if they dare go to a school board meeting and challenge these idiots that were keeping their kids out of school. [Biden and the teachers unions are] doing long-term damage to kids, going against the science that said kids should be in school because he wanted to bow to the teachers unions and he changed the CDC guidance even because the teachers union said they wanted it rewritten.“So, people aren’t going to forget that. He thinks maybe just by saying all of these things tonight people will forget what he did the last year. They’re not going to forget because he keeps doing it. And if you listen, he kept trying to sell ‘Build Back Better.’ Even Democrats said, ‘Enough of the crazy spending.’ He was trying to sell this idea of spending trillions more dollars in raising taxes! He talked about inflation, and then he talked about raising taxes [up] to 50 percent on companies, which by the way means we’re all going to pay more at the grocery store, at the shopping center, if we go buy things. Thank God that won’t pass – but that’s what Joe Biden still is trying to do. He doesn’t get it, and the voters get it. And they’re going to have a say in November.”