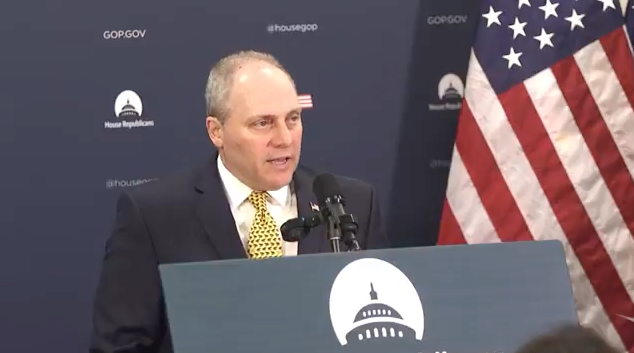 Click here or the image above to view Scalise’s full remarks.

“Right before we left, I was really proud of the work that the House did in passing, overwhelmingly, our bill to cut taxes and create jobs. With 227 votes, we sent a strong message that the House stands up for working people. We want people to have more money in their pockets, because we know they’re going to do a lot more [with] it…and make sure that we get the economy moving again, make our country competitive again, and bring jobs back to America.

“I’m really glad that the Senate passed their bill out of…the Finance Committee yesterday. I encourage them to continue working until they get a bill

passed through the Senate. Then we’re going to go to Conference and work out the differences [to] ultimately put a bill on President Trump’s desk…that will achieve those goals that we’ve all set out to do: to cut taxes for working families, put more money back in their pockets, and create more jobs.

“I also want to commend Chairman Harper and his committee for the work they’ve done to confront the problem of sexual harassment. And I especially want to single out Barbara Comstock for bringing forward the resolution that we’re going to pass…to start this process of increasing—not only educational awareness—but also transparency.”