WASHINGTON, D.C.—House Republican Whip Steve Scalise (R-La.) joined Fox News Channel’s Justice with Judge Jeanine to discuss the misplaced priorities and blatant hypocrisy from Democrat politicians across the country who are using COVID-19 lockdowns to crush America’s small businesses and the jobs they support. Whip Scalise blasted the local leaders and governors who are enforcing these restrictions on struggling small business owners, yet they don’t abide by the rules themselves. 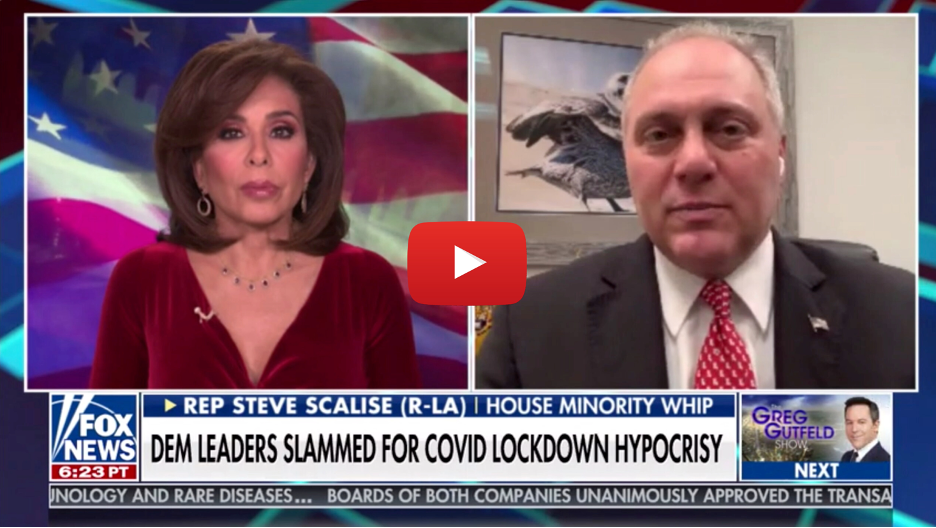 On the misplaced priorities behind COVID-19 restrictions:

“Think about some of these mayors who have been trying to defund police and they don’t want them to lock up criminals, but then they tell them to go lock up the local restaurant owner who is just trying to make ends meet and keep people employed during Christmas. Talk about misplaced priorities of these local leaders. And then they’re going to try to dump it all on our hard-working men and women in uniform. So, you know, law enforcement wants to be out there keeping our streets safe, they don’t go to work every day so they can go arrest a local restaurant owner. This is ridiculous.”

On the hypocrisy from Democrat politicians:

“This is part of the government control movement. This is what socialists do, they want to run your life. This isn’t about science. If it was about science, these governors, Speaker Pelosi, a lot of these mayors that you’ve been highlighting that are hypocrites – they’re out there telling you [that] you can’t go to your favorite restaurant, but they’re going to their favorite restaurant. They’re saying you can’t hang out with your family for Thanksgiving or Christmas, and then you see pictures of them in Cabo hanging out with their family. You know, again, if the science was there, if they were risking people’s lives, they wouldn’t be doing it themselves.

“They are crushing, crushing these small businesses, the millions of jobs that are tied to it and they just don’t seem to care. Speaker Pelosi won’t even bring up a bill on the House Floor that would get almost unanimous support that would allow these small businesses who are struggling to get another round of PPP loans. Just because, she said the other day she doesn’t want to help them, she’s waiting for a new president. My God, these businesses can’t wait and for them to see that it’s only about politics, it just disgusts people. And then the Democrat hypocrisy on top of that of do as they say, not as they do is what really undermines their credibility.”

On the liberal media’s baseless awards given to Democrat leaders:

“If this doesn’t show just how they were all rooting and cheering for Joe Biden for a year. The whole year they have been trying to get Donald Trump out of office because they don’t agree with what he’s doing because he’s actually doing what he said he [would do] – cleaning up the mess in Washington, got our country back on track. And they’ve never agreed with that kind of tough America First strategy that worked, and so they wanted to unravel what he has been doing from day one. You know, putting [Joe Biden and Kamala Harris as TIME’s 2020 Person of the Year], it’s like giving [Governor Andrew Cuomo] an Emmy Award for goodness sake. I mean, he’s crushing businesses still to this day, he killed thousands of seniors in nursing homes and they give him an award for it.”

“President Trump has delivered so much Middle East peace. [The Democrat hypocrisy] needs to go away, but I think people are tuning that stuff out. I don’t know how many will be buying that TIME Magazine and Person of the Year Award compared to maybe 15, 20 years ago, but it’s a lot lower number because people have just tuned out the liberal bias. They know it, they see it, and they’re tired of it. But look, President Trump should have gotten the [Nobel Peace Prize] just for what he did with UAE and Bahrain, and as you said now Morocco. There are other countries in line as well, because he’s actually delivered. He stood by our allies and he’s delivered a more peaceful world. And for that, they hate him. Because the same people like John Kerry who said there would never be a peace deal, they never know what they’re talking about.”