WASHINGTON, D.C.—House Republican Whip Steve Scalise (R-La.) joined Fox News Channel’s America’s Newsroom to discuss the Coronavirus outbreak in Louisiana, and the need for Congress to work together to replenish the Paycheck Protection Program so that every small businesses seeking assistance can stay afloat. Whip Scalise blasted Washington Democrats for holding this relief for American workers and businesses hostage to their unrelated liberal agenda. 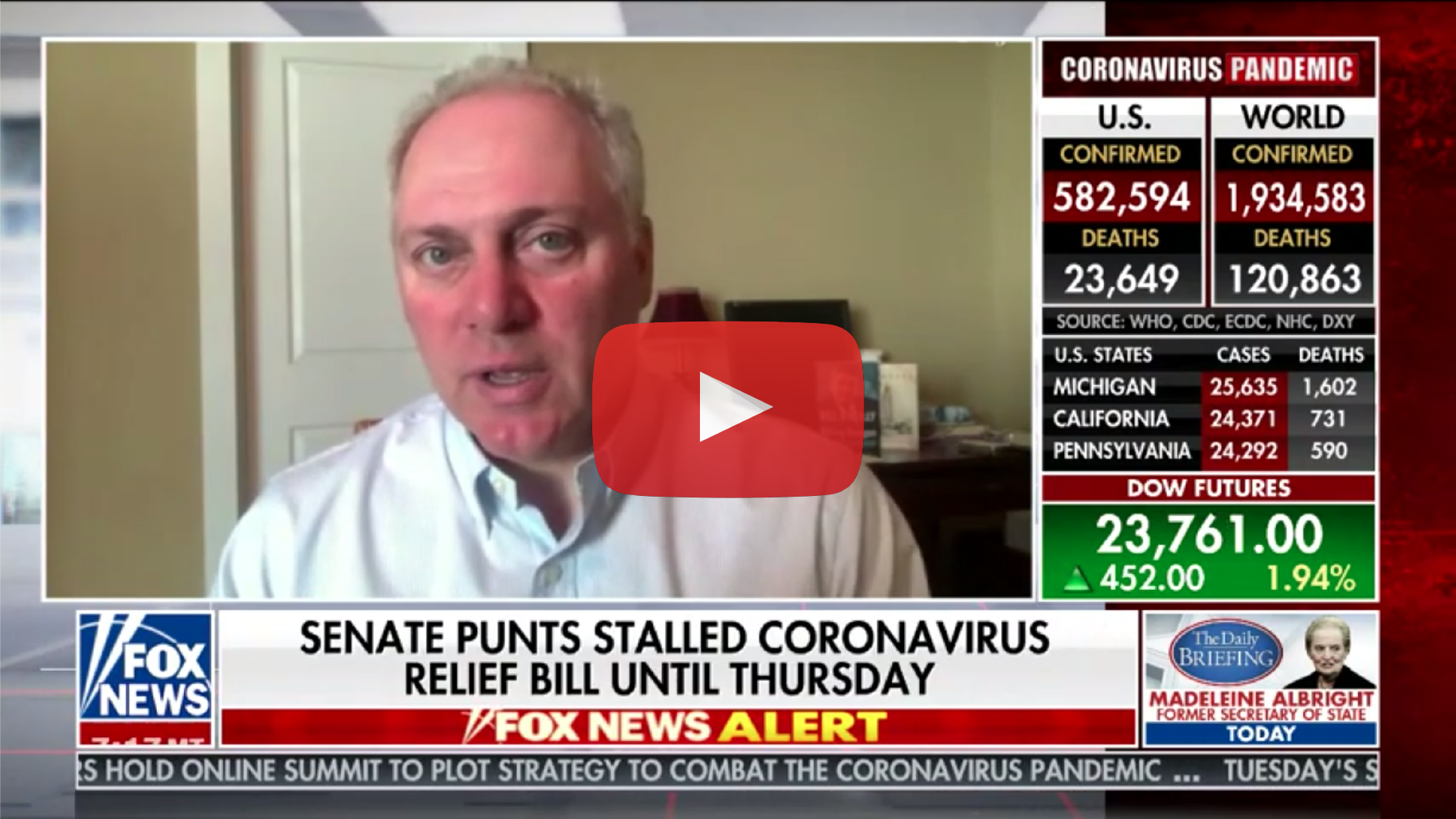 On considering the balance between reopening our economy and preventing the spread of Coronavirus:

“I’ve talked to the heads of our hospitals in the New Orleans area, and they backed up what you just heard the Governor say. You know, when you look at the indicators from maybe a few weeks ago and where we’re headed today, I think the things that people have been doing are having an impact. The ability to catch up and get more PPE to our hospitals so our health professionals have the protection they need has also increased, and I know the President was very aggressive at making sure that hospital systems like ours had everything they need from PPE’s to ventilators. So, you know, we are seeing now hopefully maybe a spike, maybe the worst days are behind us, but you don’t let your foot off the gas. You don’t get less cautious. I think as people start turning things back on, and I do think we need to start having that conversation about when to start opening things back up again, I think people are going to be a lot smarter. They’re not just going to go back to doing things like they did where they are out in public. They’re going to be washing their hands more, they’re going to be socially distancing more, but you can’t just shut everything down for an endless amount of time either, and we see devastation that’s happening to people as they’re losing everything right now. So, we’ve got to balance both.”

On ensuring the Paycheck Protection Program works for every small business needing assistance:

“I’ve talked to Larry Kudlow about this, I’ve talked to the President about this. The President fought to make sure there would be a program that would help keep our small businesses together, help people hang on through this. Both the businesses and the workers, by the way, so that workers don’t have to go on the unemployment rolls and Medicaid, they can stay on their employer’s payroll and their employer’s health insurance. And so, we see now over 1 million companies in America have now applied for this program and the checks are going to be going out soon. Our local banks have done a phenomenal job at working with those local businesses. They don’t want to see these small businesses go under, because then all of a sudden you have a collapse of the fabric of our country, and then you have all this extra debt. So, hopefully, we can see these small businesses make it through this and the PPP as it’s called, the Paycheck Protection Program, can get that extra $251 billion that the President called for and that [Larry Kudlow] was talking about there.”

On Washington Democrats putting their political demands over relief for American workers and businesses:

“The Senate had a chance to get it done. Unfortunately, you saw Chuck Schumer and Nancy Pelosi come out with a list of demands as you could call them. Instead of just saying, ‘Look, this is something that’s working for families.’ The checks are going to go out into people’s automatic deposit accounts in the next few days, you’re going to start seeing that $1200, but you want their businesses to stay afloat too. And don’t play games and say, ‘I will give you that and keep this successful program alive, if you give me these other things like the Kennedy Center debacle.’ We’ve got to stay away from those kinds of games. Hopefully we can get focused back on making sure this Paycheck Protection Program stays afloat, not just for the million businesses that already applied, but for the other maybe million businesses that are waiting to come.”

On states following guidance from the President and CDC health experts:

“If you watch over these last two months, states have been taking their cue from the President. It’s been the President that would come out and say, ‘Alright, lets socially distance and bring your crowds down to no more than ten people,’ for example. When the President said that, you saw almost every governor in the country take that cue and say, ‘Okay, we’re going to institute a new set of policies.’ So, while the President hasn’t said every state has to do this, he’s been setting the guidance using the experts from CDC and other agencies, and then you see states following suit. It doesn’t need to be a fight of governors saying, Well, we don’t want to do it,’ because the governors ultimately go to the President when they need help, when they need extra PPE and ventilators, and money, by the way. So, ultimately you see the President is the one that is leading that charge and President Trump has done a great job leading this charge. Let’s continue to keep that momentum.”