WASHINGTON, D.C.—House Republican Whip Steve Scalise (R-La.) joined Fox News Channel’s Justice with Judge Jeanine to discuss the Democrats’ misguided police reform legislation that prioritizes partisan politics instead of real, bipartisan reform. Whip Scalise emphasized that Congress must use this moment in history to work together to enact real, lasting change. However, Democrats blocked this from happening and instead chose to waste this moment. 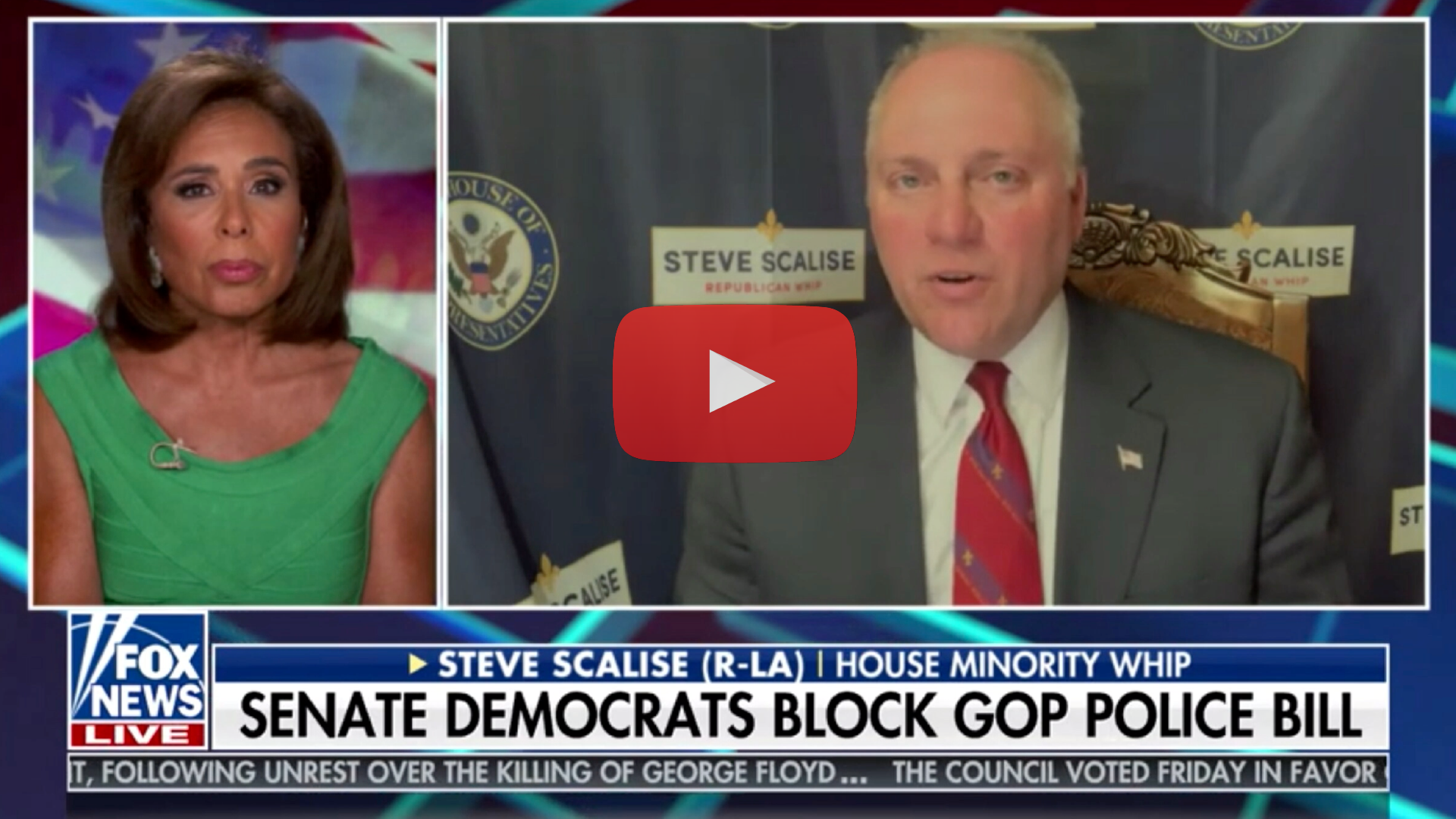 On how certain mayors are allowing lawlessness in their streets:

“You’re right on track in terms of just talking about how some of these mayors that have allowed or even encouraged lawlessness, flat-out lawlessness, in their streets. Watching some of the parts of their cities in Seattle being taken over, people just randomly tearing down things and burning down cities with the mayor’s just in some cases disbanding the police station so that they could be burned down. This has got to stop, and if you look at what President Trump has been very vocal about, it’s about reestablishing law and order, and where those governors need help he’s sending in the National Guard to back them up, to make sure that they can take their cities back. But some of these mayors are letting it happen, Judge, and they’re worse than that, they’re going after trying to make cops the bad guys and that’s wrong.”

Well, I do think you’re seeing, you know, some of the far-left taking over, you know, trying to encourage just allowing these mayors to keep going forward and not standing up for their own cities, and not standing up for law enforcement. The good cops that are out there every day risking their lives to keep us safe, and that can’t be lost. You know, while we talk about bad cops, and we all want to root out bad cops, this idea that you just paint everybody with the same brush is just wrong, and I know I’m not going to stand for it and a lot of others aren’t. We’ve focused, look, Tim Scott had a really good bill that focuses on helping good cops do their job right and getting rid of bad cops. That’s where the debate ought to be, and [Democrats] shut his bill down. Democrats voted to not even debate the bill, not whether to vote for or against it, but debate it.

On the need for bipartisan police reform:

“[Democrats] don’t want to solve the problem, Judge. Look, everybody in Washington knows this is a time where we have a moment in history where we can come together and solve some of these problems, but we also know it’s going to be a bipartisan solution. It’s not one party writing their own bill and shutting everybody else out that’s going to do it. That’s a recipe for a lot of noise. You know, some people just want to make noise and not make a difference. And so, you know, it’s going to be a bill that has to get Republican and Democrat support, so for Democrats to say they don’t even want a Republican Senator to bring his own bill up and Democrats in the House literally shutting out every single Republican amendment, voting every single Republican amendment down – including some that had bipartisan support all along – because they’re not going to bring up a bill that’s going to become law.”

“There’s not a lot of support in the Senate for the bill that passed the House because it addresses the problem from only one perspective and doesn’t really look at, for example, they make a database of every cop who has had a complaint called against them. And we’ve seen this in some cities, by the way, where the drug dealers have figured this out, the gang members figure it out, they’ll pick up the phone and call a complaint in on the good cops who are trying to shut them down and next thing you know that cops career is sidelined for a year. So, they literally can pick up the phone and shut down the good cops, and now that cops name is on a national database. That’s not the way to solve it, get the bad cops out. President Trump started to address this, by the way, in making a database of bad federal cops so they can’t go from one department to the other. Congress ought to follow that lead and do that for every bad cop who’s fired for abusing his authority.”

“There’s a big difference between filing a complaint against a cop and then having that complaint either be deemed bogus or valid. And look, you can see some of these go forward where cops have been removed from their jobs and then they’ve gone to the next department over because there was no record of them. We want to make a national database of those cops that have actually been removed, not if somebody files a complaint against you just because they don’t like you or because you’re actually shutting down the drug dealers they investigated. And again, it usually takes a year, the cops career is sidelined for that year and at the end they find that the cop actually did everything right. But in the meantime, the drug dealer got to get his, you know, his biggest nemesis off of the streets and off of his back. That’s what you don’t want to see.”