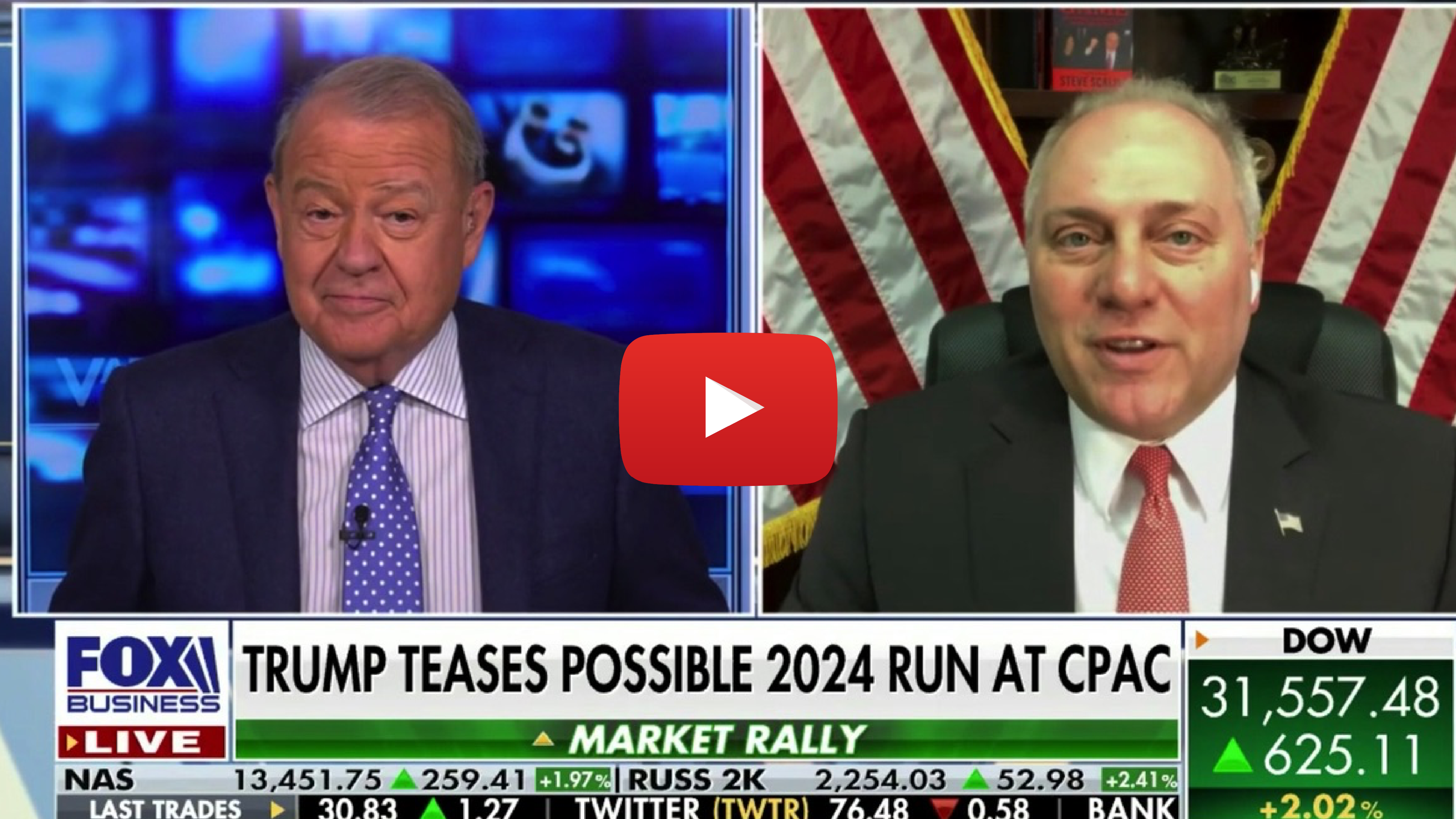 On President Trump’s support in the Republican Party:

“Well, Stuart, I think you saw from yesterday’s CPAC speech that President Trump is still the one who gets the most enthusiasm from Republicans. He keeps them guessing right now [on his future plans], but look, he’s still the most vocal voice and the leader of our party who is going to play an important role, number one, in us getting the House back next year, and President Trump made that very clear. He wants us to fire Nancy Pelosi and win back the House, but ultimately, he’s going to be actively involved in making sure we win the White House back in four years. And, you know, whatever role he chooses to play is up to him, and he’s got a lot of options and an incredible amount of support amongst the base of the Republican Party.”

On President Biden and Nancy Pelosi’s devastating impacts on jobs and reopening schools:

“You know, when you look, again, at what’s in front of us, we need to flip five more seats to win the House back, and you’ve seen Joe Biden working with Nancy Pelosi to move so far to the radical left in such a short period of time. Just what he’s done on energy to kill the Keystone Pipeline, to put a freeze on leases and on permits, it’s been devastating to the energy industry all across this country. States like Pennsylvania, states like Ohio, all across the nation, obviously in Louisiana, Mississippi, we see it. North Dakota, Oklahoma, no matter where you go, you’re seeing the devastating impact on jobs.

“Just the issue of reopening schools where Joe Biden is going against the science, and Nancy Pelosi and Biden are supporting the teachers’ unions over students in America. There are parents all across the country that I’ve heard from, Republican, Democrat, Independent, who are livid that the Democrats in Washington are siding with the unions over the students and the science to reopen schools. So, on every front right now, Republicans are very poised to win the House back, and President Trump wants to help us and will be able to help us fire up those people that we need to show up next year to win those seats back and to get the House at least back as we work to get the White House back in 2024.”

“Look, for the people that hated [President Trump] and who tried to impeach him before he even took the oath of office, they’ve always felt the same way, but for the people who loved having a robust economy, who loved having a national security policy both from the border, where we actually secured America’s border, to around the world where we supported our friends. And, look, Israel, there’s an American embassy in Jerusalem right now because of Donald Trump. We support our allies. I think a lot of our allies miss that kind of bold America first and America’s allies first foreign policy. You got Joe Biden talking about getting back in the deal with Iran. They’ll let them get a nuclear weapon. Giving Russia an OPEC leverage in energy by dismantling America, getting back in the Paris Accord where now China’s economy is going to have a chance to dominate again. That’s what people miss because they like the fact that the Trump policy was working for America, including the vaccine, by the way, which President Trump talked about.”

“Now, there’s three proven vaccines by the FDA because of Operation Warp Speed, which was President Trump’s aggressive stance to say we’re not going to wait three or four years to get a vaccine, which is what the experts said. He said, ‘We’re going to get one in less than a year,’ and we have three in less than a year with over a million people getting shots in the arms every day, to where we should be able to try to ramp that up even more. Joe Biden, again, has taken a less aggressive approach.”