WASHINGTON, D.C.— House Majority Whip Steve Scalise (R-La.) joined Fox News Channel’s “Fox & Friends” this morning, where he laid out the facts of the House’s American Health Care Act, pointing out that under the bill those with pre-existing conditions will be protected, and that folks will actually be able to have access to health care options, unlike under the current Obamacare system. 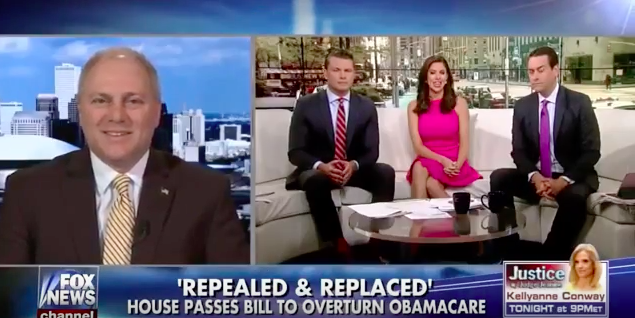 On bringing the Republican conference together to pass the bill:

“We worked nonstop to make sure that we built the coalitions, made the necessary changes in the bill to ultimately produce an even better bill that lowers premiums, protects people with pre-existing conditions, and ultimately lets people choose their own health care decisions. And you saw our conference come together--and clearly we have a lot of different factions within our conference–but they all had the same approach to wanting to really, truly provide relief to people from Obamacare.”

On the next steps to getting the bill signed into law:

“This is what the legislative process is all about. You look at any major piece of legislation that has ever been signed, it goes through the House, it goes through the Senate, if the Senate makes changes it goes to a conference committee, and then we get it to the President’s desk, and that’s our goal. And again, the main objectives are–even if the Senate makes changes–they need to make sure they stay focused on the primary objective, and that is lowering premiums for families, protecting people with pre-existing conditions and giving people the freedom to make their own health care choices. That’s what we did in this bill. I hope the Senate continues to build on that and Donald Trump’s ready as President to sign a bill into law that finally frees people from the failures of Obamacare.”

On the biggest misconceptions about the bill:

“Two biggest misconceptions: first of all, that people have good health care today.You look at Iowa next year, you will not be able to buy any health insurance if you’re in the Obamacare marketplace because it’s collapsed, there’s literally nowhere to go. And the biggest one probably is pre-existing conditions, and I would refer people to something we maintained in our bill; it’s called continuous coverage. And what that means is whatever health care plan you have today–if you have a pre-existing condition you can never be denied coverage and you can never be charged a dime more, not any amount more, than anybody else in the plan. That’s maintained and that can’t be waived by any state.”

On following through on Republicans’ promises to the American people:

“I think this might gain us seats in the House because it means we followed through on our promises. People don’t like Obamacare and if anybody’s surprised that we were going to try to repeal and replace Obamacare–it was a central figure in every campaign, including in the presidential race when Donald Trump as candidate said ‘I’m going to repeal and replace Obamacare,’ and Hillary Clinton said she’d keep it.”