Additionally, Whip Scalise discussed how we must maintain the health and safety of American families during the Coronavirus crisis, while also restoring our economy so we can reestablish the strength of our great nation. 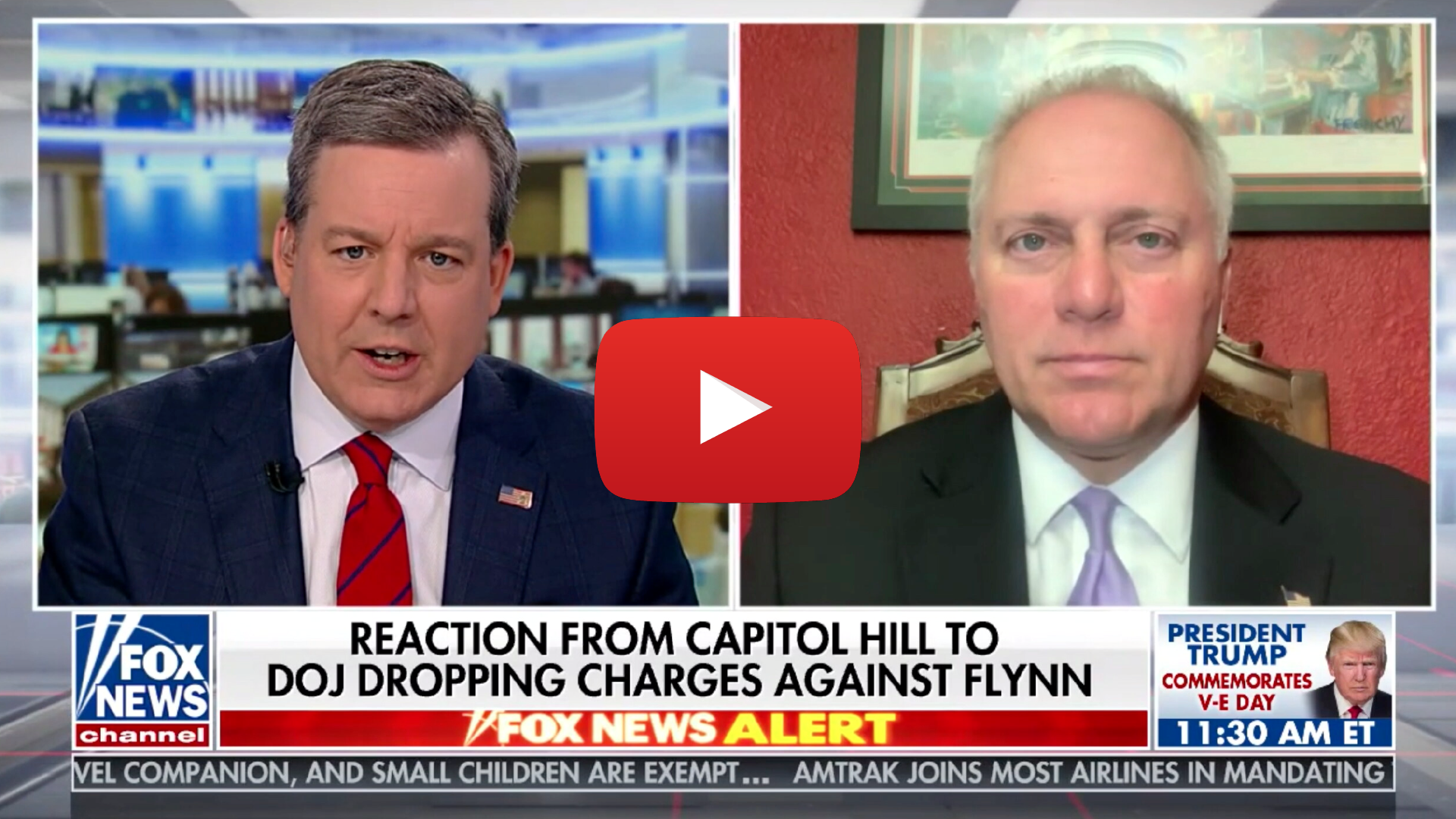 On the Department of Justice’s decision to drop the phony case against General Flynn:

“It’s really a remarkable discovery. We’ve been talking about this for a long time, Devin Nunes, as you can recall years ago was starting to beat this drum that there were dirty cops within the FBI, that they were conspiring against the Donald Trump campaign before he was elected president, as you heard President Trump talking about there, and then they tried to entrap and literally set up General Flynn and forced him to plead guilty to something he didn’t do and in essence trying to bankrupt the guy. They not only owe him an apology, there needs to be accountability at the highest levels of the FBI and the people within the FBI at the time who knew this was going on, and who in essence set up. Look, we know some of the names already. Strzok is at the heart of this too, but does this go up to Comey? Does this go up to President Obama and Vice President Joe Biden at the time? Were they aware that there was no collusion, and that still, their Justice Department was going after, targeting Donald Trump as he was elected, not even sworn in, and some of his top officials including General Flynn?”

“It looks pretty clear that [President Obama knew there was no collusion], and where’s the reaction, by the way, from President Obama? Where are the press questions towards Barack Obama and Joe Biden about what they knew and when they knew it, and why they didn’t stop the FBI from going after an innocent man? I’m glad that the Justice Department finally fixed the problem that they created. They literally tried to destroy a man’s life because they wanted to get him fired. They wrote that in the notes, even if there was no evidence, and there was nothing that he did wrong. Here’s a guy who’s trying to get the new duly elected President established with foreign leaders to get a new foreign policy implemented, which is what the American people chose Donald Trump to do, and they’re trying to undermine those efforts from within the FBI. Those people need to go to jail. That shouldn’t happen. That’s something that happens in third world nations and it shouldn’t be tolerated in the United States of America.”

On the need to hold the bad actors who started this whole vendetta against President Trump fully accountable:

“I’ll tell you, the honest competent people at great agencies like the FBI want the house clean more than anybody. Those bad apples that are still around, and some that have already left in disgrace need to be held accountable to restore the integrity for the large majority of the people over there that are working hard for the American people. There were bad people over there, we know it. The bad cops are starting to get exposed, but we’re just getting close to cutting off the head of the snake and the Justice Department is doing a thorough investigation. I’d like to see it go ahead and start seeing charges brought. We’ve read enough, I’ve seen classified information, but we’ve seen enough just in public documents that show you that people abused their power, violated their positions, at agencies like the FBI and others, and they need to be held accountable to send a message, number one, that what they did wrong isn’t going to be tolerated, but also to anybody else who is thinking about doing that. We all have our political views, but when you’re working for law enforcement, you have to check those views at the door. They didn’t do that. The people that hated Donald Trump, they tried to undermine his candidacy for President and then they tried to take him down afterwards with the impeachment hoax. It still went on, and there might still be some of them over there. They need to be rooted out. You root out the bad cops, and then everybody else will have a much higher level of confidence in that important agency.”

On maintaining the health and safety of American families while also restoring a strong economy:

“There are already trillions of dollars that have been sent out, over $3 trillion just in the relief packages from [the CARES Act], and the bills prior to that. And so, what you need to see now is a real reopening of the economy in a safe way and do it on a consistent basis. I know some states are starting to reopen safely and they’re having good success, some states are holding back. I think what you’re hearing, and I’ve talked to so many business owners from the smallest local restaurants to the largest businesses that say, ‘We need to start getting people back out again in a safe way, because people want to start getting back out safely.’ And that’s the only way you’re going to get this economy open, but there are some real negative health consequences to keeping things shut down and you’re already starting to see it.

“Mental illness is on the rise, suicides are on the rise, people that aren’t getting their normal checkups where you can detect things like early cancer, that’s not happening, and it needs to happen wide-scale. And people, by the way, the depression and loss of hope that goes with losing your job, and your career, and your business, that has a negative consequence too. So, we know, businesses are already showing how to safely reopen. We’re Americans, we know how to do this. Let’s start getting it done wide-scale before they talk about things like bailing out states that were already failed prior to COVID-19, or radical ideas like the Green New Deal. Let’s focus on helping families and businesses safely get back to work.”