WASHINGTON, D.C.—House Republican Whip Steve Scalise (R-La.) joined Fox Business Network’s Mornings with Maria to discuss how anti-Trump agents in James Comey’s FBI who engaged in misconduct in an effort to take down General Michael Flynn and President Trump must be held accountable.

Scalise also emphasized how the Select Subcommittee on the Coronavirus Crisis must prioritize holding China accountable and reducing their influence on our supply chain, while also focusing on practical solutions to reopen our economy and prevent another pandemic. 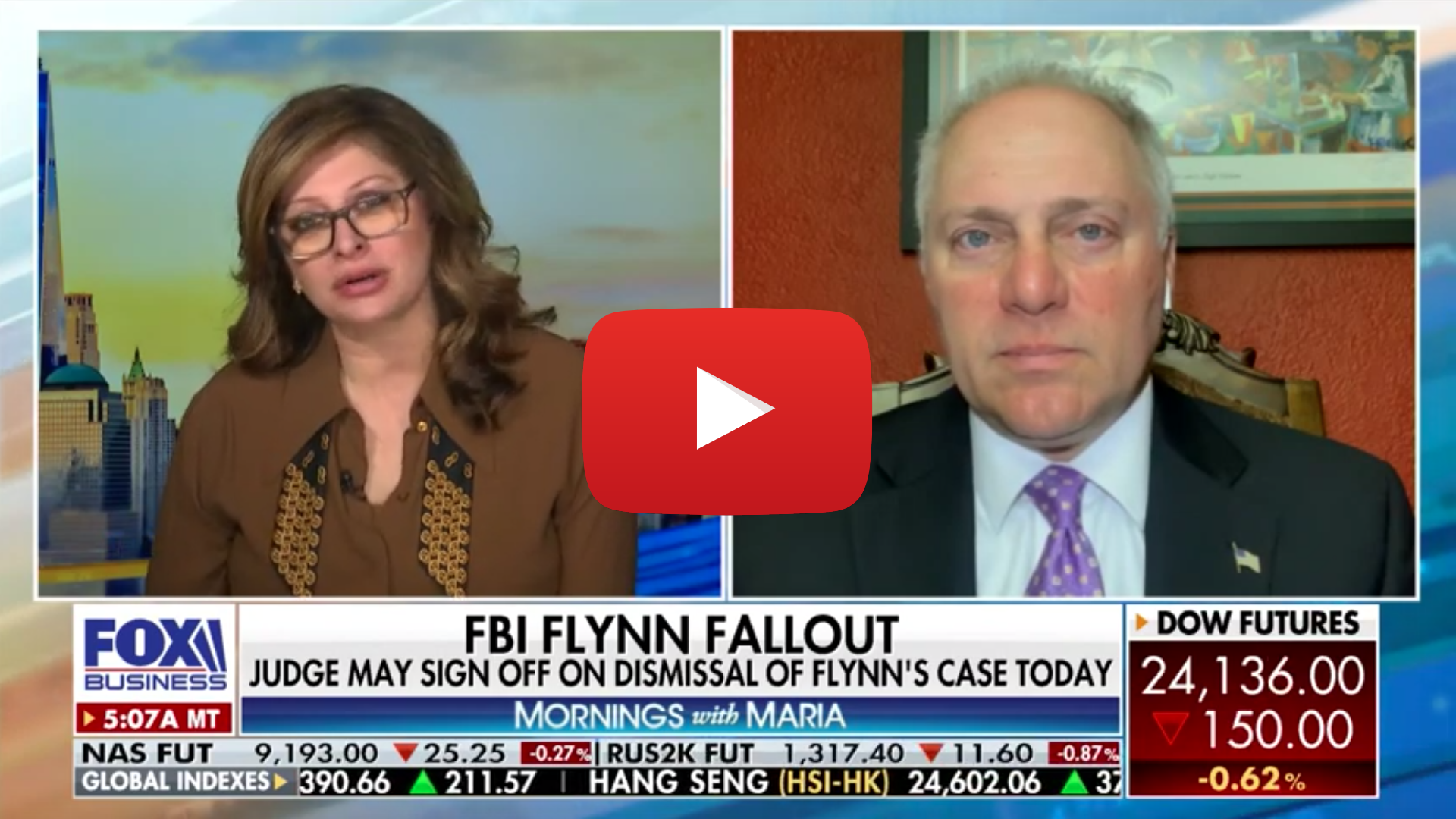 On holding James Comey’s FBI fully accountable for their abuse of power:

“This is disgusting. It’s something that we’ve been exposing and fighting to get the truth out for a long time, you know, we’re talking years to try to get the facts out on this. The FBI and some of the holdovers in the Justice Department were trying to hide this from getting out. Adam Schiff was trying to mislead people about what was going on here, but this was a setup by some real dirty cops within the FBI and the Justice Department. And how high does it go? There are very serious questions being raised about whether it goes all the way to the top, and did Barack Obama and did Vice President, at the time, Joe Biden know about this and encourage it to happen – let alone let it happen? Because as you pointed out, the FBI had previously made a decision not to go forward with a prosecution of General Flynn because he didn’t do anything wrong and instead a few of the dirty cops wanted to set him up because they ultimately wanted to take down Donald Trump even after he was duly elected President of the United States with nothing behind it; there was no evidence except the Russian disinformation that came from the Steele Dossier which was fueled by Democratic Party operatives tied to Hillary Clinton’s campaign. This is disgraceful.”

“The Russian attempts to interfere in our elections in 2016 happened on Barack Obama and Joe Biden’s watch, that’s when we know Russia tried to interfere with the election, but it was Barack Obama and Joe Biden who were in charge at the time. And now, of course, all this comes out. It raises very serious questions, Maria, and the people that we already know we’re dirty cops really need to be held accountable and people need to go to jail.”

On the need to carry out justice for the bad actors who started this vendetta against President Trump:

“I think we are, you know, the Durham investigation that’s been going on is a criminal investigation. It shifted over that way a long time ago. I want to see that expedited because there’s so much public information already out there, let alone with what’s known through other hearings. This stuff is the kind of thing that you need to go to trial to start, by the way, there are a lot of other people, I think, lower level folks that were part of this that will talk and, you know, there are a lot of members of the, whether it’s [the Justice Department], FBI, some of them have been let go and disgraced already, but some of them may still be there trying to interfere in this 2020 election. That’s why justice can’t be delayed. Justice has to be carried out swiftly, and then let’s have these people start talking under oath and find out just how high up it goes.”

On using the Select Subcommittee on the Coronavirus Crisis to hold China accountable and get our country back on track:

“We ought to be much more aggressive at the Congressional level at holding China accountable, and you’ve been calling for this for a long time. There are a lot of us that have been calling for it. For whatever reason, Speaker Pelosi will not put a focus on holding China accountable. Even the Coronavirus Crisis Task Force, which I’m the lead Republican of, I’ve said many times this committee needs to also start focusing on holding China accountable, helping us bring our supply chain back. Of course, the main focus should be trying to help Americans get back to work and get back their livelihoods and help them recover through this. But we also have to go and hold China accountable and like you said, I mean look, there are some great American drug companies right now trying to find both therapies that can treat Coronavirus, COVID-19, as well as a vaccine, and if China tries to steal that information we also ought to be very aggressive at finding out if they’re doing it, stopping them from doing it and holding them accountable there as well. That’s not going on in the House right now which is very unfortunate, but I think the American people are fed up and want to see China held accountable too.”

“There is a deeper cost to China having so much control of supply chain, especially as it relates to national security. You know, and if it’s toys or certain things that we buy at department stores, that’s one thing. But when it comes to our national security, whether it’s drugs, like our generic drugs, over 90% are made in China. When you look at PPE, you know, when we were trying and struggling to get even American companies that operate in China to sell that PPE back to us, the Chinese Communist Party wasn’t letting them send it out to America and other countries as well. There’s a growing interest, it’s not just us, there are a lot of other countries that need to be a part of this.”