Whip Scalise also demanded answers from Speaker Pelosi about why she hasn’t removed Rep. Eric Swalwell from the House Intelligence Committee when his reported ties to a Chinese spy are an alarming national security risk. 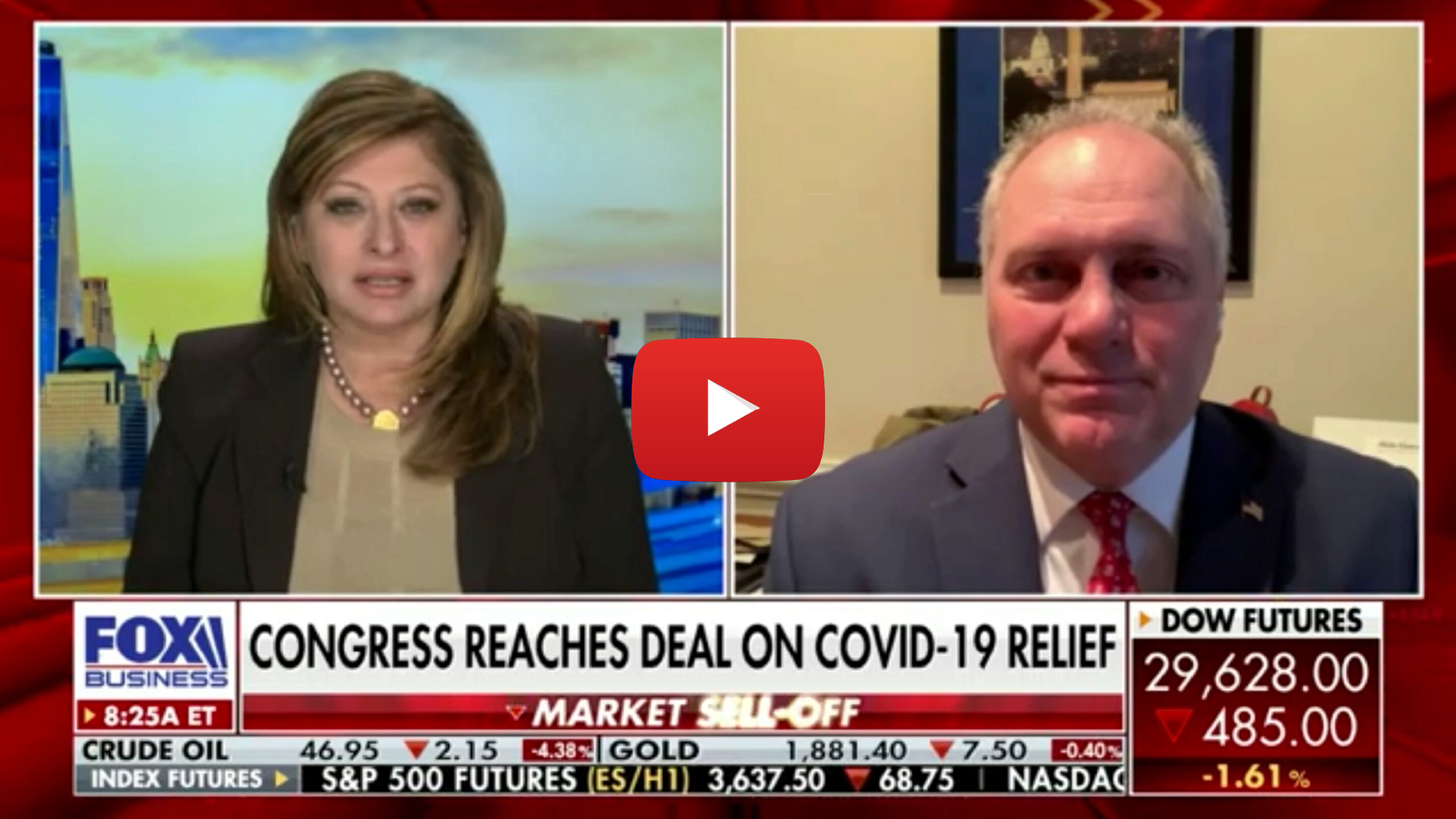 Click here or on the image above to watch the interview.
On the targeted COVID relief package:

“The big focus for months now has been on getting more relief to our small businesses and the millions of workers that are tied to those companies so that they can keep their jobs, the businesses can make it through these tough times. So, getting a second round of PPP loans authorized was probably the number one priority. […] The first round of PPP loans were highly successful, saved probably over 50 million jobs. So, that’s probably the cornerstone of this bill. Businesses that are experiencing at least a 25% loss still to this day will be able to get a second round of forgivable loans. So, of course, a business that’s doing better today, they won’t be able to get it, but anybody who is struggling can still be able to get another round.

“And, by the way, we fixed what has probably been the biggest complaint for weeks now – it’s that these loans would have been taxed in the past. We’re going to have full deductibility for those PPP loans, so you won’t be hit with the sticker shock of an end of year tax bill on the loan that got you through this pandemic. So, that’s going to be in there. Of course, as you mentioned, some of the other relief items. A fix to the problem of surprise medical billing, that’s something our Doctor’s Caucus and so many of us have wanted to get resolved for probably well over a year that we’ve been working [on]. Families back home, they go to a hospital, next thing you know weeks later they’re getting a bill for thousands of dollars they never knew they were going to get. That will be fixed. That’s a major win for families across the country. So, there’s a number of other things in here in addition to this COVID relief package.”

“This has been a frustration going back to the first CARES package. We tried to get real liability reform in that first package. As you know, the Democrats through the trial lawyers have been blocking it every step of the way, and then they were trying to literally ask for hundreds of billions of dollars to bail out failed states. So, last week you saw Mitch McConnell finally acknowledge that if we’re not going to get liability reform, there won’t be any more relief for states. And that’s something that ultimately both of those got pushed to the side. And it’s disappointing because I think many people would like to see the liability reform. But the trial lawyers, as we can see, have a stranglehold over the Democrats writing these bills right now.”

“I mean, this is something we’ve been trying to get included for months, but you see strong pushback from the Democrats on liability reform. Again, going back to the very first CARES relief package. So, can we get agreement on that? We’ve been trying for months, and they don’t seem to have an interest in budging. So, at least we were able to get some other relief that’s vital for millions of jobs across the country and save a lot of those small businesses, these heartbreaking stories we see of businesses just barely holding on or never coming back. We want to see them make it through this.”

On the Georgia Senate elections:

“Everything’s at stake in this election, and it starts with control of the United States Senate. It’s going to go one way or the other based on how these two races go. You see very, very radical Democrats in both [Raphael Warnock and Jon Ossoff]. So, you know, Kelly Loeffler’s been making that case and so has Senator Perdue. So, it’s critical people show up in this election because this will be a turnout election. You can see the Democrats are very motivated because they want to grab control of the Senate, they want to push Medicare for All, and the Green New Deal, and defund the police. That’s a radical agenda, but it’s theirs if the people in Georgia sit at home. So, look, we can all be upset about what happened in Georgia. Clearly, their Secretary of State’s taken a lot of incoming, and he needs to do a better job this time around. But the people are glad the President’s going.”

On Rep. Eric Swalwell’s reported ties to a Chinese spy and position on the House Intelligence Committee:

“It’s alarming, Maria, that Eric Swalwell’s still on the Intelligence Committee. It raises even more questions about why he even got on this committee especially [in his] second term. It’s a very sought-after committee. Clearly, he had ties to a Chinese spy. The Chinese spy was able to infiltrate his own office. Look, the Democrats have a China problem, Maria. The fact that Speaker Pelosi pulled back from the bipartisan China commission that was going to look into the wrongdoings of China. You saw Senator Feinstein for 20 years [she] had a Chinese spy on her staff as her driver listening to maybe some of her most intimate conversations.

“Why is the Democrat Party, especially when you look at the Bay Area, what’s going on over there, it’s alarming. Why won’t they come clean? Why won’t Speaker Pelosi answer these basic questions and why won’t she remove Eric Swalwell from the Intelligence Committee? It boggles the mind. Every American ought to be alarmed by this. China’s been infiltrating, stealing our intellectual property. You’ve covered a lot of that for years. But to see the depth, they went after Eric Swalwell when he was a councilman in California. That’s how pervasive it is. It’s got to get addressed. Democrats need to get serious about taking on China like we have for a long time.”