Whip Scalise emphasized how this should have never been about politics and highlighted the significance of passing the COVID relief package which provides a lifeline to small businesses, provides the resources to make Operation Warp Speed vaccines available, and helps reopen schools and the economy. 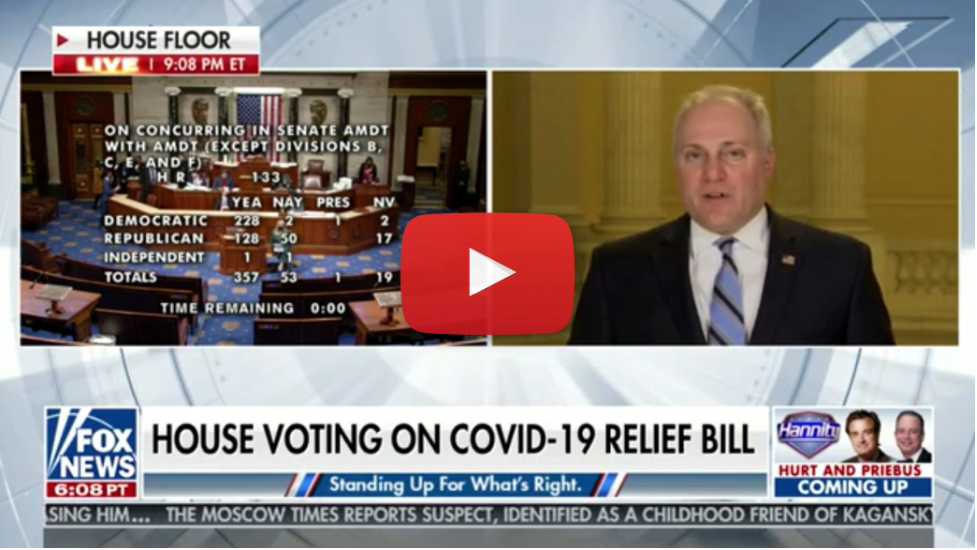 On Speaker Pelosi’s decision to block COVID relief to play politics for months:

“Unfortunately, we’ve seen this movie before when she was Speaker last time, and she’s been Speaker this time. She loves setting arbitrary deadlines, running up past the deadline, and then just trying to threaten for things that nobody else wants to give. And in fact, we didn’t give her a lot of those things she wanted.

“You saw and covered it a little earlier, President Trump offered her a lot more relief and money just months ago and she walked away from that because not because she didn’t like the deal, because she didn’t want President Trump to get credit. She said she was waiting for a new president. That’s why small businesses across this country did not get the relief that they should have had back in September, Jason. There was bipartisan interest in a bill like this back then.”

On the importance of the COVID relief package for hard-working families and small businesses:

“In the end, the COVID relief is critically important to save these small businesses You know and I know that businesses all across our country – in South Louisiana, I talked to restaurants and other businesses every day who are about to literally teeter on the edge of bankruptcy and they need this lifeline. This gives a second round of Paycheck Protection Program loans; it helps those gig workers. You know, in New Orleans, we’ve got a great thriving music industry. None of them can go out and perform.

“And so, we need to keep that culture and keep those industries alive. But they are literally dying on the vine right now. Not to mention in the states like New York and California where they are arbitrarily shutting down their entire economies even though the science says they shouldn’t be doing it. And so, so many businesses, over a third of all small businesses in the state of New York are gone for good. We need to save those jobs and the millions of people who are tied to them right before Christmas, this will be a lifeline to save our economy as we round the corner, as we get the vaccine widely distributed because of President Trump’s Operation Warp Speed. So, it was critical. I wish it was done differently. There should have been done months ago, but it’s a vital lifeline to those people who need it most.”

On providing critical support for our men and women in uniform:

“Yeah, there are some tax cuts that get extended through this, which is going to be good for overall economic growth. There are a number of other provisions. This bill includes a pay raise for our troops, much needed pay raise for our men and women in uniform which, by the way, has been a big priority of President Trump. You saw under the Barack Obama and Joe Biden Administration, our troops were depleted, our military was depleted and our troops hadn’t gotten that kind of support.

“President Trump rebuilt our military. This is one more piece of continuing President Trump’s ability to rebuild our military. And, by the way, Jason, this bill also includes billions more to build more border wall which, you know, as you’ve heard Joe Biden say he doesn’t want to build new wall, this allows President Trump to continue building the wall on his terms. Some other provisions like that, that are important to our national security that was in this package as well.”