WASHINGTON, D.C.—House Republican Whip Steve Scalise (R-La.) joined Fox News Channel’s Fox & Friends to discuss how abuse of power within law enforcement must be met with swift justice. However, Democrats’ radical “defund the police” movement is not a serious solution and weakens the rule of law and puts people at risk.

Whip Scalise also emphasized how Congress can return to work to show Americans that we can safely reopen our economy to eliminate the economic burden from COVID-19 and preserve our nation’s physical and mental health. 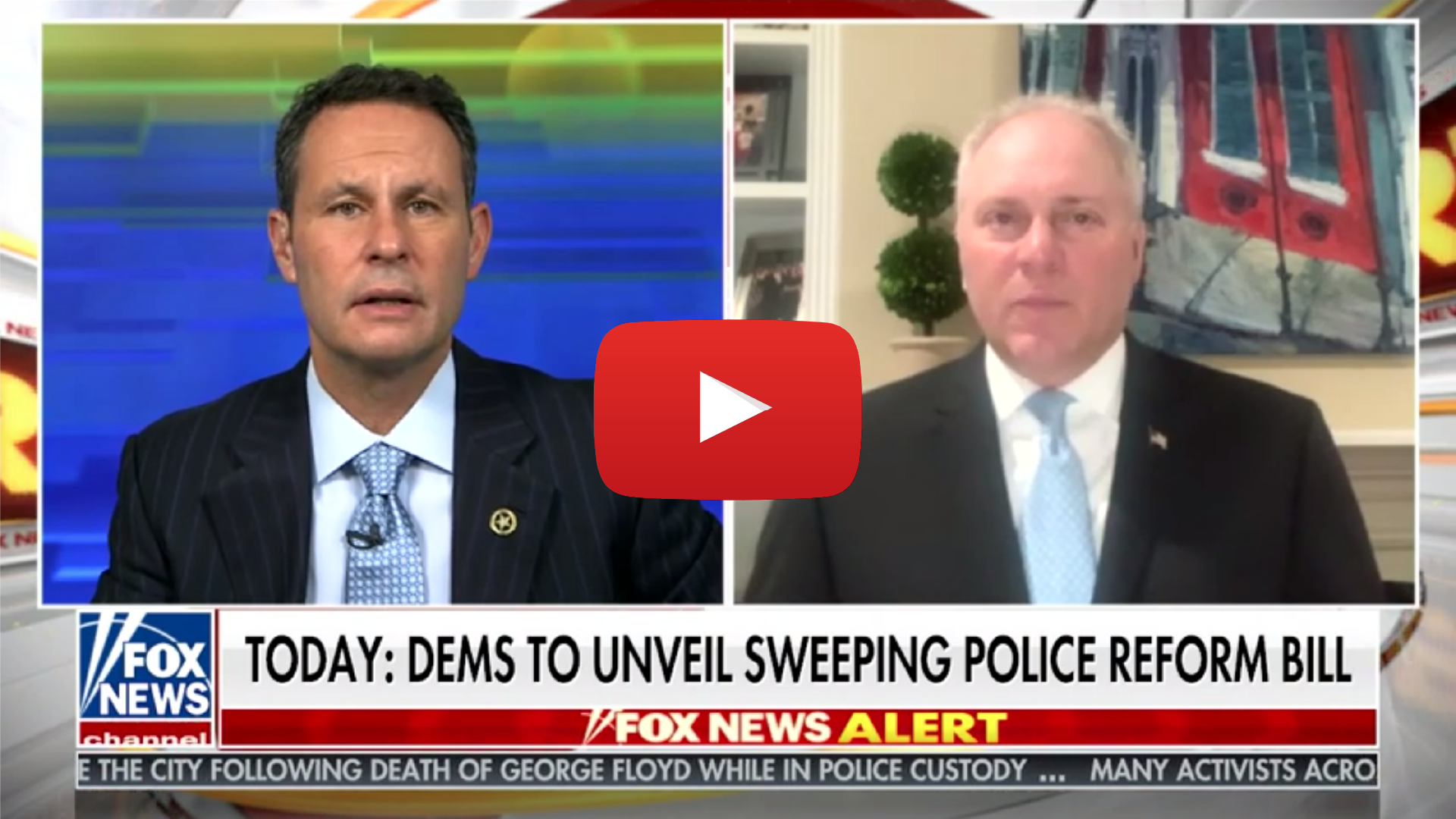 “The real bulk of the rain came late last night, or the night before last, and yesterday morning the eye probably passed over around here close to 2 o’clock in the afternoon and a lot of water, you know, but then we even saw water going as far as Jacksonville, Florida. So, you know, it’s passing through. It’s a tropical storm, not a hurricane. And the low-lying areas that typically get a lot of water did get some heavy water but no mainstream flooding. We just need to keep our fingers crossed as it moves through.”

On Democrats’ “defund the police” movement:

“You know, there’s been a lot of conversation over the last few weeks. I mean, obviously, we all mourn the death of George Floyd. We want to see justice carried out. And I think, you know, you’re finally seeing that in Minneapolis. And that’s where they’re going to have to really ensure that justice is carried out. And if there’s these, you know, these other communities, you’re seeing a lot of the discussion about where to go next. And I think we need to keep having that discussion not with violence but, you know, with real people talking to each other. And as far as the Democrat package, they haven’t been talking to Republicans about this. So, I’m not sure what they’re going to be rolling out. But, clearly, you know, if somebody abuses their power in any position of law enforcement, there needs to be accountability. We’ve been talking about that for a long time as well. And so, you know, accountability and justice needs to be served.”

“We’ve seen some police departments that have had serious problems and, you know, some of them enter into consent decrees with the Justice Department. I would imagine when you look into Minneapolis, it seems like they’ve had some problems that didn’t go addressed and, you know, where these departments have had problems, we need to look at what they’re doing there. But everybody ought to be treated equally. And you shouldn’t, again, if anybody in law enforcement abuses their position, they need to be held accountable.”

“[Defunding the police will not solve abuse of power]. You know, you’re even seeing, on the left, the debate where, like you pointed out, the Mayor of New York is for defunding police and the Governor of New York is not. Joe Biden’s trying to play both ends of this and hide out in his bunker and not directly address it while yet trying to embrace, quietly embrace the defund movement. He ought to be very vocal about where he is on this. And it’s not the direction to go.”

On the need for Congress to return to work on behalf of the American people:

“Well, it’s been ok to go back to work for a long time. And, you know, we had a vote over a month ago that went very safely and, you know, people practiced social distancing. And Congress should have been in Washington throughout a lot of this to show people how to come back safely.

“Again, you go look at the states that opened up and that opened up early. They didn’t have any outbreak in their hospitals different than anywhere else in the rest of the country. And that was what the shut-in was supposed to be about, is making sure the hospitals didn’t get overrun. And yet now we’re seeing our hospitals to the point where they want their regular customers and patients to come back. Patients need to be treated. There are a lot of reports coming back right now, health studies showing that people not going to their doctors causing severe, severe life-threatening consequences. In many cases, spikes in death from non-COVID related things because people aren’t going to see their doctor.”