WASHINGTON, D.C.—House Republican Whip Steve Scalise (R-La.) joined Fox News Channel’s Fox & Friends to emphasize the devastating impacts students are facing as Democrats pursue a nearly $2 trillion package of progressive priorities that doesn’t provide accountability or immediate relief to safely reopen schools for in-person learning. Whip Scalise also noted that 95% of the school funding in the proposed Biden COVID bill is not set to be spent until 2022 and outlined how this bill will actually delay safely reopening schools. 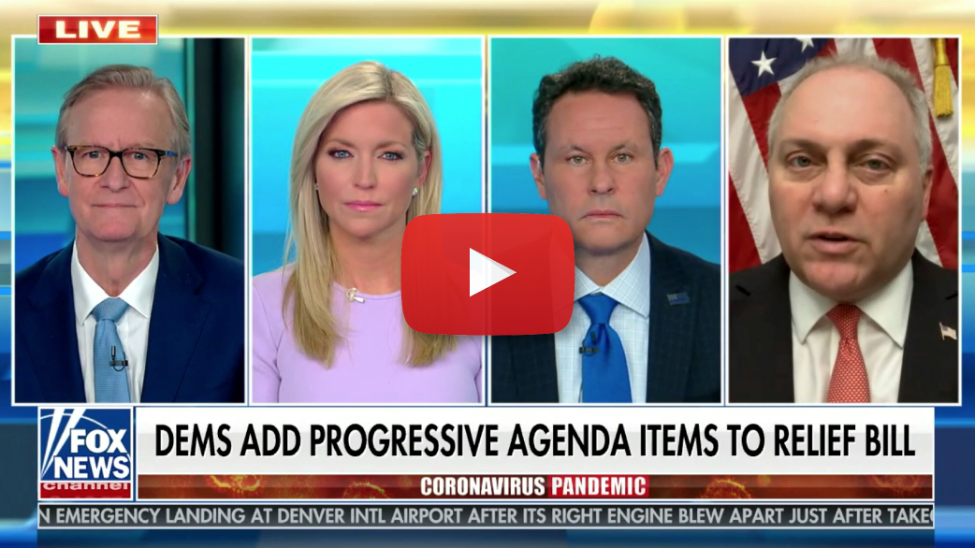 “Unfortunately, when you look at the bill that Pelosi’s bringing [to the House Floor] this week, less than 10 percent of the money in this massive $1.9 trillion bill is for health-related items. I thought this was supposed to be about recovering from COVID. Start with the biggest item, $350 billion to bail out failed states. Look, California just announced a surplus of $10 billion and they’re going to get probably tens more billion from this bill.

“New York State – we had an amendment to require New York to report the nursing home deaths data that Governor Cuomo’s been covering up, the major scandal in New York. Do you know that every Democrat, including the Democrats from New York, voted against requiring that Cuomo has to disclose the nursing home death data to get tens of billions of dollars for New York? This is in the bill. Again, minimum wage. You mentioned the $15.00 minimum wage. What does that have to do with COVID relief? In fact, for small businesses who are dying on the vine, like that heartbreaking story Ainsley just talked about, those small businesses are going to have an even harder time coming back when you go to a $15.00 minimum wage. These things have nothing to do with COVID.

“The school bill – this should be about helping schools safely reopen so kids can be learning in the classroom. We’ve seen the studies. The damage that is being done long-term to the children in this country, millions of kids, when maybe 40 percent of all Americans are back in the classroom learning every day. Every single student should be and can be learning. The President’s Press Secretary, yesterday, Jen Psaki, on a news show admitted that the money doesn’t even have to be used to reopen schools. Over $100 billion to go to schools, not to reopen. In fact, 95 percent of that money can’t even be spent until 2022. Do you really want to wait until 2022 to start having your kid go back in school? This bill actually will delay school reopening. This is crazy.”

On the devastating impacts students are facing:

“Well, Bernie Sanders and the far-left have been wanting to do this for a long time. It’s been a big cause of AOC who helped write this bill. So again, this is where the socialist left and the unions have literally driven this bill. This bill should be about helping kids get back in school. Instead, it’s about bowing to the teachers unions who don’t want kids to be back in school when all the science and the CDC Director said get the kids back in the classroom. It’s important for their mental health. Suicides are up, depression is up. Kids aren’t learning as well. But they’re going to keep holding those millions of kids behind in this bill. It’s a national crisis and it’s a national disgrace.”

“Where’s accountability, by the way? That’s what kids want. They want to be back in the classroom. Why not have money in this bill for school choice? If your local school system wants to take your money and not educate your kid in the classroom, shouldn’t you be able to take that money and go next door?”

On following the science to safely reopen schools for in-person learning now:

“Absolutely, and they’re undermining the science. Remember, Joe Biden said follow the science until the science said safely reopen the schools. And you can do it today, not 2022. And then Biden sidelined the CDC director. There’s over a trillion dollars still left unspent. We don’t need another $1.9 trillion of debt that goes to our kids. Our kids will pay this debt. And this is a disaster for our youngest.”

“These kids are being left behind. Let’s reopen our schools. Let’s vote against this bill. Thank you.”