WASHINGTON, D.C. — House Republican Whip Steve Scalise (R-La.) joined Fox News Channel’s The Next Revolution with Steve Hilton last night to discuss Dr. Fauci’s recently uncovered emails from the early stages of the COVID-19 pandemic revealing the possibility that the coronavirus originated from a Chinese lab. In addition, Whip Scalise highlighted how over 200 members of the Republican Conference called on Speaker Pelosi to direct her committee chairs to join House Republicans in investigating the origins of COVID-19. Whip Scalise called out the mainstream media for spending the last year falsely calling those who correctly suggested the coronavirus may have originated from the Wuhan lab conspiracy theorists. 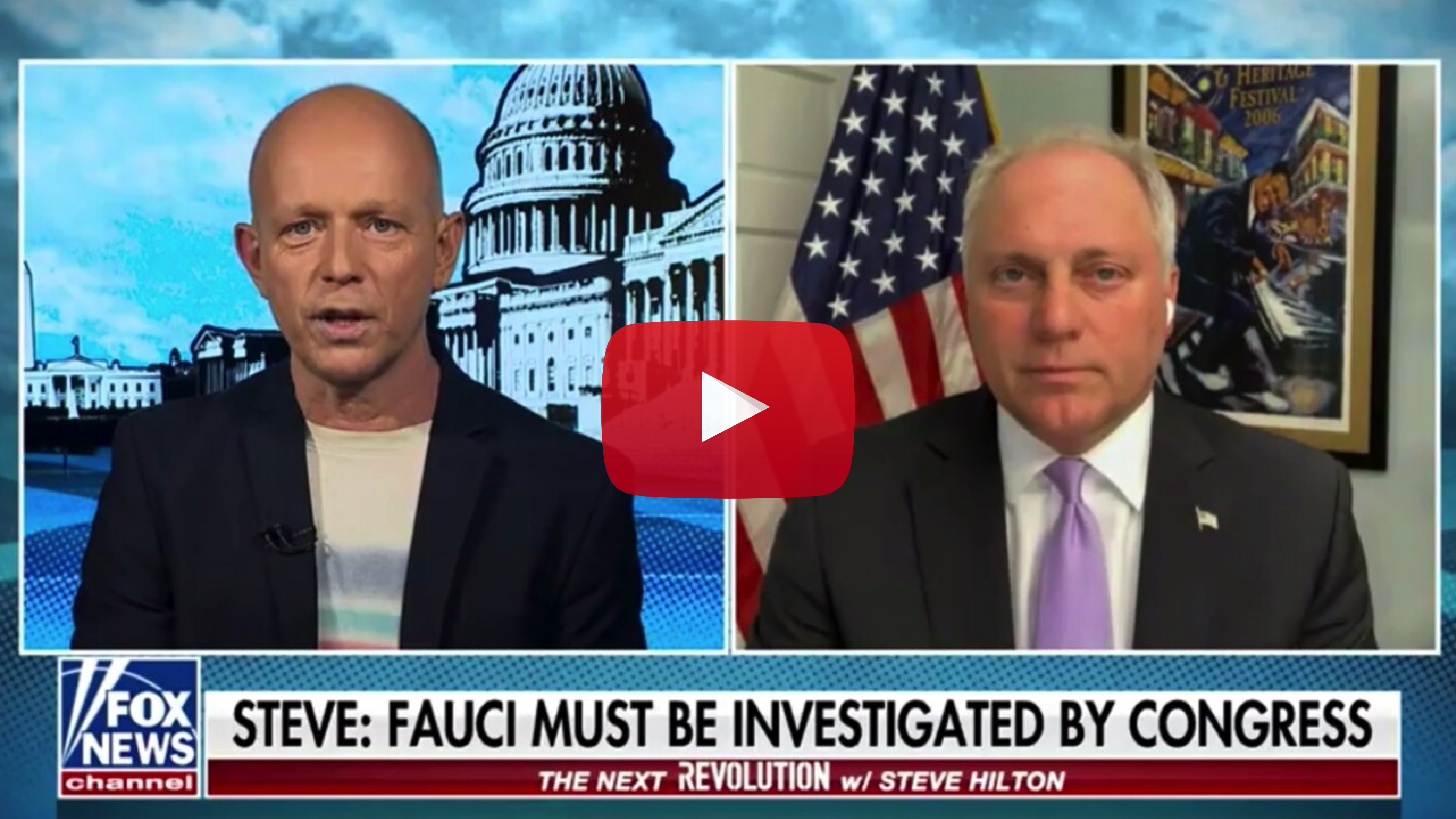 On the need to investigate the origins of COVID-19:

“What we need to do is have hearings on this very issue. I mean, [if] you look [at] the emails that came out [over a week ago], clearly [there were] those of us, [who], for a year now, [were] calling for an investigation into the origin of this virus, specifically whether or not it did start in that Wuhan lab as you pointed out. Again, over a year ago, many people were calling for this kind of investigation, and we were called conspiracy theorists. Now it looks very much like that may have been where this virus started from. Whether it was intentional or not, and whether ‘gain of function’ was part of what the United States taxpayers were helping fund, those are serious questions.

“Rand Paul [has] raised those questions. He’s a medical doctor himself. He understands ‘gain of function.’ But as well as the question of whether or not it actually started in that lab in Wuhan and whether there was funding that went with it, whether directly or directly of American taxpayer dollars, these questions should be answered. Pelosi, for whatever reason, will not call a hearing. We’ve been calling for her to do this for over a year. I think the pressure’s mounting, Steve, and I think in a hearing is inevitable.

“But President Biden himself should want to know the answers to these questions. Look, this virus has been devastating both to Americans as well as [the international community.] Millions of people dead, let alone the damage it’s done to all of our economies and [the] psyche of our children. We ought to get these answers.”

On the need for Dr. Fauci to testify:

“Well, that’s again why we are demanding a hearing. Over 200 of my colleagues sent a letter to Speaker Pelosi last week, after the emails came out, saying we need to have a hearing on this specific issue. We have a number of committees of jurisdiction that are already in place. The Select Subcommittee [on the Coronavirus Crisis], of course, is one. You’ve got the Oversight Committee, Energy and Commerce, [and] there’s a China Task Force that initially was going to be bipartisan, [but] Speaker Pelosi walked away from that. But we still have that committee standing up. There are other committees as well. But this needs to be investigated by Congress, and let’s get more detailed answers.

“Maybe China won’t give us honest answers, but we’ve had scientists in America that have been in communication with some of those scientists in the Wuhan lab. Let’s get as much out there on the record as we can. If they haven’t already destroyed the evidence in China, let’s get whatever we can now so that we can find out before it’s too late. Because again, we’re over a year away from this. The longer we go, the harder it’s going to be to get these answers. We ought to be getting these answers right now. Speaker Pelosi ought to want to get to the bottom of this, too, and get the facts out. For whatever reason, she’s been stonewalling, but we’re going to keep fighting to get these answers.”