WASHINGTON, D.C. — Today, House Republican Whip Steve Scalise (R-La.) joined Fox News Channel’s Fox News Sunday to discuss how instead of coming together to find common ground on solutions to actually address the root causes of gun crimes, Democrats are proposing gun control measures that encroach on the freedoms of law-abiding citizens and do little to reduce gun violence. Whip Scalise emphasized that every American has the right to arm and protect themself and pointed out that Democrats’ gun control legislation will make it easier for the government to confiscate legally obtained firearms without due process. Additionally, Whip Scalise pointed out that Democrats’ radical anti-police agenda has caused a dramatic rise in crime in cities across the country, leading to more Americans purchasing firearms as a way to defend their families. 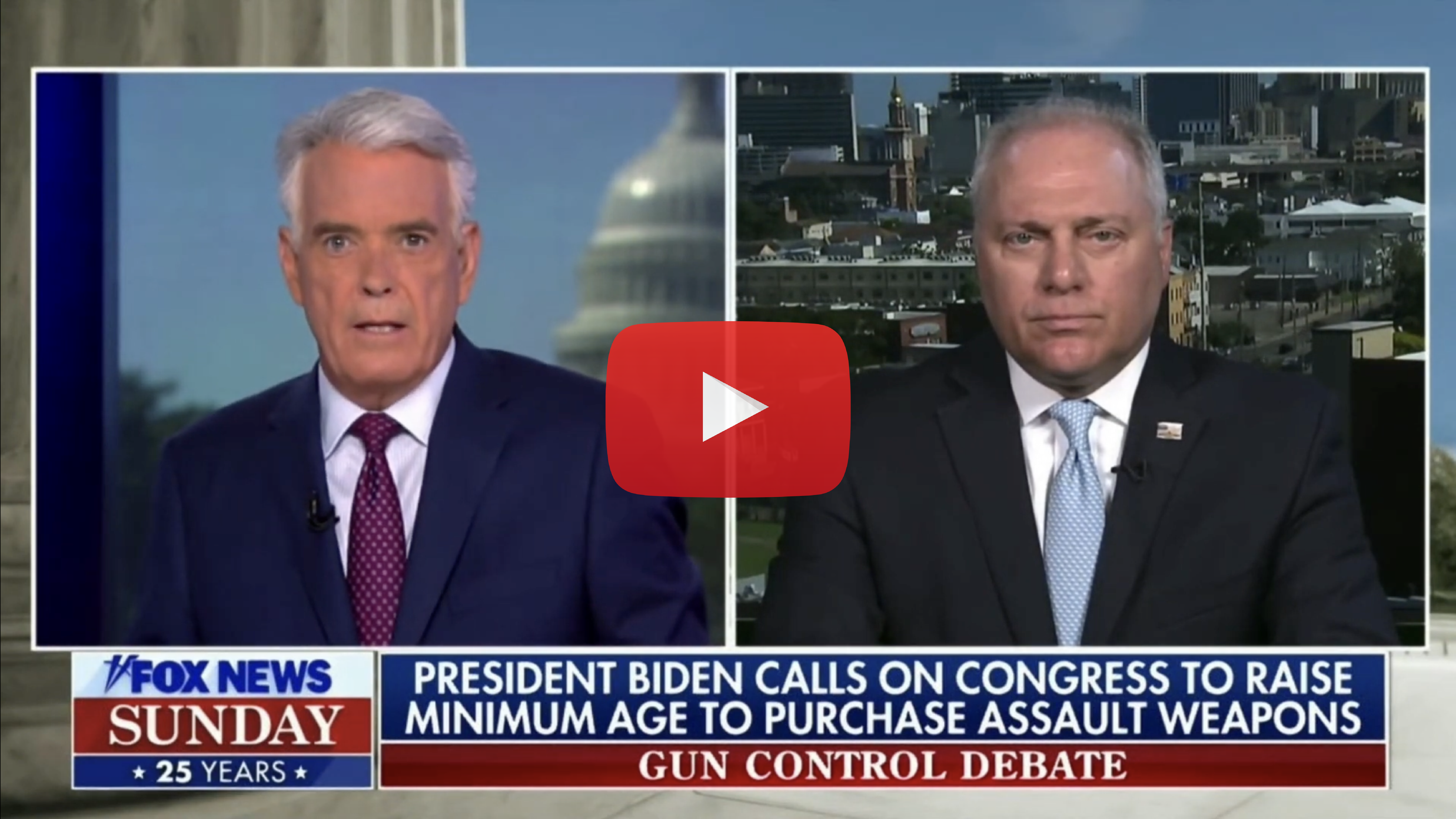 “Well, John, the best way forward is, first of all, when you have a shooting, instead of sitting down and going, ‘Okay, what is really causing this? Why do we see these [shootings] happening more and more in the last few years?’ It immediately becomes a debate about taking away guns, and you see Democrats quickly run – [on] the day of the shooting – they were talking about passing H.R. 8 in the Senate.

“Go look at H.R. 8. It would have done nothing to stop this shooting. But what they end up [doing], by the way, the President himself went even further and started talking about going after handguns in that same speech. And so, immediately [that] pushes everybody in a corner instead of sitting down and saying, ‘Why don’t we look and see if we can find some telltale signs so that there could be intervention?’

“Some communities actually do this. This just happened a few days ago in Berkeley, California. There was a student that was trying to not just shoot but blow up his high school, and other students found out about it. They alerted authorities, and authorities were able to move and stop it before anything happened. We need to be focused more on stopping things before they happen. This isn’t something that we’re having a conversation about right now, and it should be. It immediately becomes about Democrats wanting to take away guns.

“Go look at the hearing that they had last week in Congress. I mean, you had Democrats cursing out the Second Amendment. You had members saying, ‘Well, if we can get this, we’re going to blow up the filibuster and pack the Supreme Court to get around the Second Amendment.’ The Second Amendment is not some guideline. It’s part of the United States Constitution and the Bill of Rights, and it’s there for a reason.

“By the way, every day in America, people use guns to defend themselves, and there are a lot of examples of that, too. So, instead of talking about Democrats always wanting to take away the rights of gun owners, law-abiding citizens, especially, why don’t we talk about the root causes of these problems? And there is some common ground to be found there, John. That’s not where the conversation is today, unfortunately. Frankly, I’d like to see us go in that direction.”

On President Biden’s call to raise the minimum age to purchase an assault weapon:

“Well, first of all, you can look [to] California. They had a bill to raise the age in the state of California, and a federal court ruled it [was] unconstitutional. So, instead of trying to go down unconstitutional routes, why don’t we look at why more young people are doing this?

“And by the way, in a lot of these school shootings, there is somebody in that school that knew the shooter was going to take action before the shooting. And we did this after September 11th. We got really good about focusing on stopping something before it happens. If you’re in an airport today, and you see a bag sitting idle, it’s not going to be there five minutes before somebody alerts [the] authorities.

“We need to be helping get kids more engaged in alerting authorities if they see something they’re concerned about and let the authorities take action if it’s necessary, and try to intervene and stop something before it happens instead of just immediately rushing to go take the rights of gun owners away.

“I mean, look, you had [this happen] just a few days ago in West Virginia. There was somebody – it wasn’t at a school – there was somebody with a rifle illegally that he – he was a felon, [he] shouldn’t [have] even had it – and he tried to go shoot up a bunch of kids at a birthday party at graduation and it was a woman with a concealed carry permit handgun, who took down the shooter.

“There are a lot of Democrat colleagues of mine who want to take away concealed carry permits. And again, the President himself was talking about going after handguns. There’s a case where a handgun was used to take down the shooter. In my case, it was a cop with a handgun that took down the shooter.

“And so, you know, let’s offer our prayers to the victims. Unfortunately, even [during] moments of silence right now, you’ve got Democrats sometimes yelling during a moment of silence instead of focusing on the victims. And then let’s go search for the root of the problem. How can we do a better job of connecting the dots and stopping something before it happens? Like we did after September 11th, which has worked really well as it relates to stopping terrorist attacks.

“Let’s put that kind of focus on schools and young kids, not just at schools. Let’s also, by the way, look at hardening schools. There’s a lot of common ground there too. My colleague [Congressman] Hudson is working on a package – others have too – to help harden schools and provide [the] ability for the schools to help kids identify a problem before it can happen. Get that [information] to authorities if you see a kid about to do something bad before they do it.”

On how Democrats’ support for the “Defund the Police” movement has made the American people less safe:

“Well, in a lot of those countries, first of all, I mean, you look at America, in the last couple of years, you’ve seen this crazy, ‘Defund the Police’ movement. But, you’ve also seen a movement that’s been going on for a few years in big cities where the [District Attorneys] aren’t even prosecuting criminals until it is a shooting or a violent crime. And they’re letting criminals back out on the streets. And then inevitably, what you see [are] higher rates of crime.

“And what you’re also seeing is more and more American citizens, law-abiding citizens, are buying guns to defend themselves. It’s happening in every demographic group you can imagine, where you have large increases in people buying guns because if they can’t have faith that their local police department that’s been defunded can arrive quickly, or if the [District Attorney] is going to let the criminal out, they’re their only line of defense. So, people are buying guns more to defend themselves against crime, but crime is out of control in a lot of big cities.

“But by the way, if you look at what happened in those cities, you see a lot of the things [associated] with the ‘Defund the Police’ movement with letting people out, no cash bail, where they’re making it easier for people to commit crimes. Look at the smash and grab crimes. Do you think it’s going to end there? If they think they can get away with a crime, they’re not going to be charged. They will go on to commit more crimes and worse crimes. It’s happened in other places. Let’s get back to regular policing.”

On the true implications of Democrats’ gun control legislation:

“Well, I can assure you that the American public wasn’t asked in that poll about components of the bills Democrats are moving through Congress to do those things.

“So, you know, under the guise of [a] red flag, they take away due process where they literally can come into your house and take away your gun without you even knowing that there was some kind of proceeding where somebody said, ‘Oh, I think that guy might be a threat.’

“So, now somebody can go and take away your constitutional right. I don’t think people would agree with that. That’s not how we deal with rights in America.”

On the Democrats’ gun control agenda ignoring due process:

“Again, I point to West Virginia. Just a few days ago, that shooter broke every law on the books. There [are] hundreds of gun laws already on the books that aren’t even being enforced by this administration, in some cases. And so, this guy has got a gun. He’s going out to shoot a bunch of people. He doesn’t even – under current law – doesn’t have the right to have the gun. Yet, he’s got the gun. Thank God there was a woman with a gun and a constitutional carry permit where she knew how to use the gun, and she took the shooter down.

“If we take away the rights of those people, they’re not going to be able to defend themselves from the people that don’t care what the laws are. They’re going to figure out what they’re going to do. In Berkeley, they were using bombs to try to blow into school. So, why don’t we focus on the root cause of the problem instead of trying to take away the guns from law-abiding citizens who have a constitutional right to carry?”