WASHINGTON, D.C. — Today, House Republican Whip Steve Scalise (R-La.) joined Fox Business Network’s Mornings with Maria to discuss how President Biden and Congressional Democrats are trying to exploit Hurricane Ida in order to push their unrelated $3.5 trillion tax-and-spending spree that will cause inflation to rise and decimate the United States’ energy independence. In addition, Whip Scalise slammed President Biden’s decision to withdraw U.S. troops from Afghanistan without concrete plans to safely evacuate American citizens, protect the Afghan people, or prevent the Taliban from taking over the country. Whip Scalise also criticized the Biden Administration’s mismanagement of the number of humanitarian, economic, and national security crises happening throughout the country. 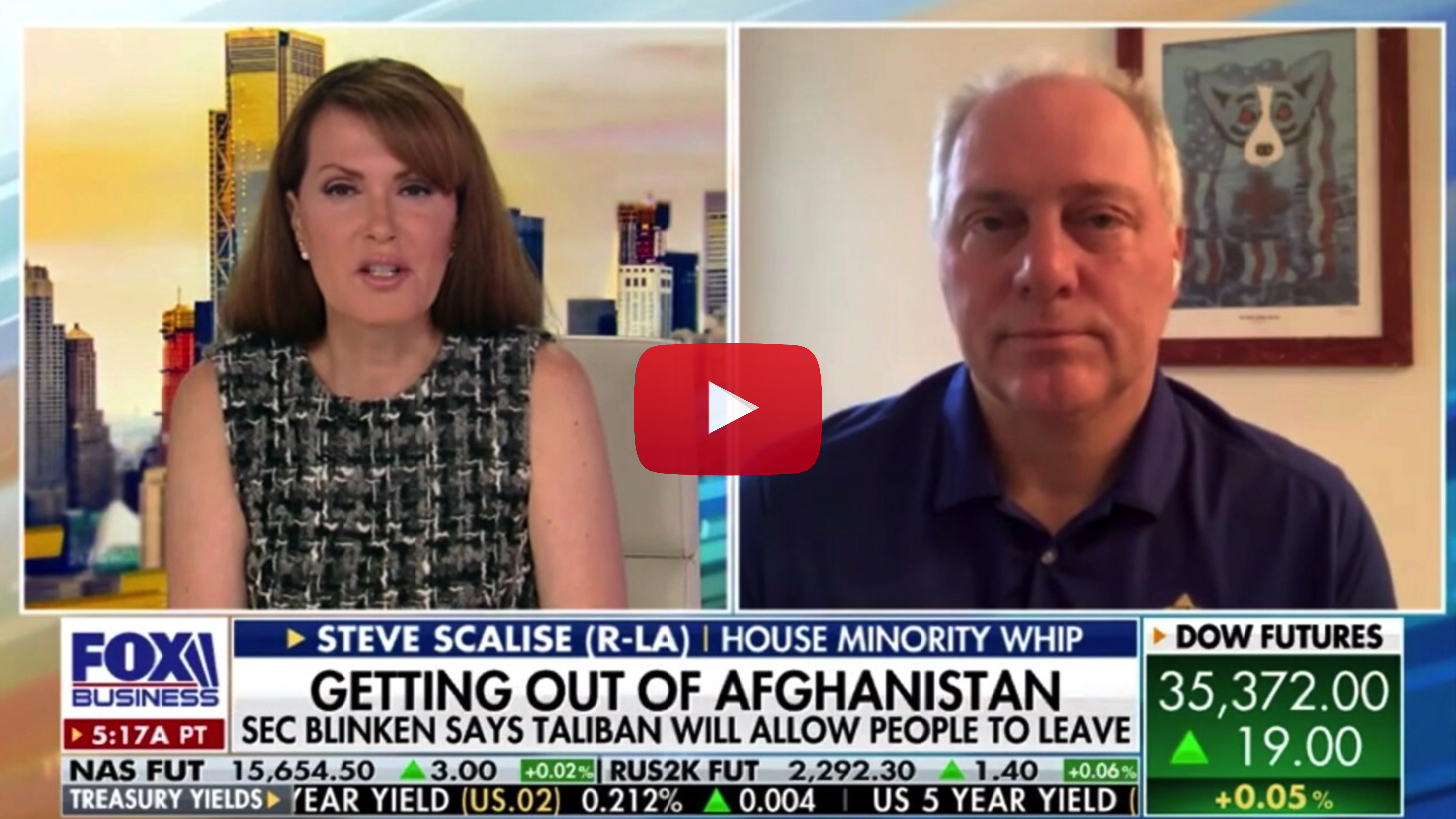 “You know, we’ve talked about infrastructure for a long time. President Trump wanted to get an infrastructure bill. And by that, I mean what everybody used to always consider infrastructure: roads, bridges, ports, waterways, even broadband. Where they’ve gone on the left is now to try to redefine infrastructure to include a lot of anti-fossil fuel, Green New Deal-type proposals to do tax and spending. I mean, Speaker Pelosi’s tied this bill to a $3.5 trillion tax and spend bonanza for the left. It would wreck our economy. It would increase inflation. And by the way, it would make it harder to get fossil fuels.

“Look, here on the ground in [the] New Orleans area, people that are decimated from Hurricane Ida, the biggest two needs from Republican and Democrat leaders alike are power and gasoline – and both come from fossil fuels. Our power grids [are] generated by natural gas. No hospital after the storm was running on windmills and solar panels. I’m all for renewables, but they don’t do the job for what we need in baseload capacity. And their bill, their Green New Deal agenda goes against fossil fuels and helps Russia, helps Middle Eastern countries, helps OPEC, at our expense. And by the way, their bill increases global carbon emissions, which I thought [goes against] their whole religion of global warming?”

On Democrats’ hypocritical stance on fossil fuels and green energy:

“Yeah, but of course, if something goes wrong and they want to go to a hospital, they want to make sure that that hospital has electricity. And where does it come from right now? Again, it was not from renewable sources of energy. It was from your traditional power grid, which is natural gas here, or during the time of the storm. In those five or so days after, it was mostly diesel power to generators and large industrial generators that could run that equipment. And look, if they get rid of all of that and stuff, it’s not like it just goes away. President Biden, just a few weeks ago, was begging OPEC and Russia to produce more oil because gas prices are so high already from his radical agenda. So, you know, look, this stuff has never worked.

“But if you send those jobs, and that work, to foreign countries, China, India, they’d be happy to refine our oil and our gasoline. Russia and OPEC would love to produce more oil if we’re not doing it. The thing is: we have better standards here in America. They emit more carbon to make that same fossil fuel energy in other countries. Why wouldn’t you want to make more stuff here? We are reducing carbon emissions because we do things better. They love beating up on America. Yet, America has the highest standards in the world.”

On President Biden’s disaster in Afghanistan:

“This whole debacle in Afghanistan continues to get worse [from] reports that we’re hearing. And it’s not just [from] Republicans. I think Senator Blumenthal’s office was also one of the sources for [the article about] Americans being turned away on private flights. We already heard stories, a few weeks ago, of Americans showing up at the airport in Kabul – when we still controlled it – with passports and being turned away then.

“So, you know, again, how [do] you put a plan together to pull out U.S. forces without first evacuating all Americans, and our allies, who we had already approved for visas? It boggles the mind. It’s heartbreaking. Because, you know, the stories we all hear, I serve with a lot of Members of Congress who served in Afghanistan, and they know people personally, who helped our men and women in uniform, helped save lives, and they wanted to get them out. They know them by name. There was a plan to get them out, and they were all stranded behind enemy lines, both Americans and our allies, the interpreters who helped save American service members. It’s disgraceful.”

“[Democrats] were already on track to lose so many seats in Congress because of their economic debacle. I mean, you know, you had crisis after crisis. You had a border crisis. Then you had an economic crisis. You had fuel shortages with inflation through the roof, and then you see this foreign policy debacle. And it’s not the first one. I mean, you know, everybody knows that Joe Biden was the last person to leave the room when President Obama was deciding whether or not to take out Osama bin Laden. And, you know, luckily, President Obama didn’t listen to that recommendation. But, in the end here, nobody that looks at this says it was done right except President Biden.”