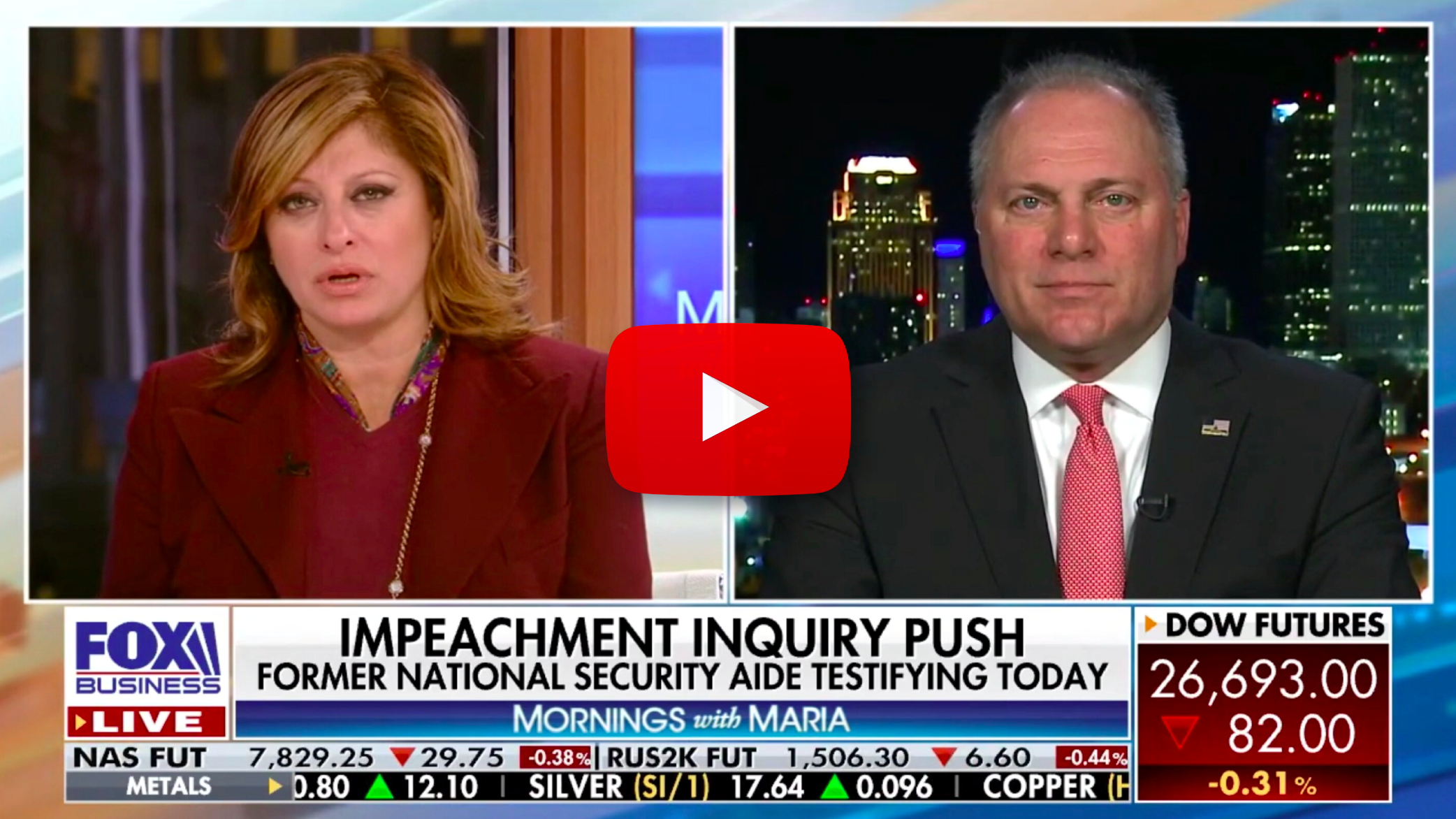 On Democrats’ attempt to impeach the President on false accusations and secondhand information:

“Well, this is part of Adam Schiff’s — it’s like a kangaroo court he set up, but they’ve got this shroud of secrecy, where they want to drip out things that they want to allude to, they make false accusations to try to tar the President, while if you look at the facts that have come out, the facts have all said that this is a witch hunt, that the President did nothing wrong. The transcripts — you know, we’re talking about whistleblowers. Why do you need a whistleblower when you actually have the transcript of what was said, and the two people that were directly on the call both have said there was nothing wrong, including [Ukraine President] Zelensky, again, saying there was never any pressure. [Zelensky] thought it was a good, congratulatory phone call from President Trump. And so, why Adam Schiff continues to hide in secret the Volker testimony, he was already starting to leak out some things that were false about it, and everybody else that listened — or was participating in the Volker testimony said that Schiff was being disinformative and, frankly, that the entire thing should be released to the public. What is Adam Schiff trying to hide, Maria? It’s like a continuing pattern we’re seeing from him of throwing out false information, hoping the mainstream press goes and runs with it because by the time the truth comes out, they’re on to throwing out more false accusations about this President. All to try to impeach a President of the United States based on secondhand information and false information. It’s alarming.”

On the need to focus on real accomplishments like the USMCA and lowering drug prices:

“…I think most people across the country are saying, you know, let’s focus on getting the economy back on track, focusing on things like USMCA and lowering drug prices.

“You know, when you had the President go and get a partial [trade] agreement with China, that’s a big deal. It’s a big deal that should tell the rest of the world we can get better agreements with countries that have been taking advantage of us, and one good way to start is by passing a deal with our neighbors from the north and south — Mexico and Canada — and yet Pelosi won’t do that because she’s so fixated with impeachment. And I think a lot of these members in swing districts are hearing that, ‘Hey, you ran saying you were going to work with people to get things done and all you’re focused on is impeaching the President over a lie about quid pro quo that never even happened. What are you people doing up there?'”

“Think about this: Schiff wants to impeach a President of the United States behind closed doors. As if we’ve seen anything like this. I mean, Andrew Johnson, they didn’t even try to do it this way. You look throughout the history of our country. Again, only three times in the history of our country have impeachment proceedings come out of a committee; every single one of them started with a public vote. Not secret, but public, and this idea that you could hide everything in secret when they’ve got a track record of throwing out false information time after time to try to undermine the President. And then the President — they never thought, Maria, that the President was going to release the transcript because if the President didn’t release the transcript, could you imagine the media narrative, and the Schiff narrative that, OK, look at all these high crimes and misdemeanors. We need to get to the bottom of it, and it turns out there were none. They cannot name a high crime and misdemeanor. They’re searching around on a witch hunt for it, but that’s not why you have a grand jury proceeding, for example. If he wants to use that analogy, does a district attorney really go and say, ‘Hey, we’re going to go and try to indict this person. Now let’s go see if we can find evidence of it,’ and behind closed doors, they secretly try to find something. That’s not how it’s done. It ought to be in public. What is Schiff trying to hide, I think, is the real question when we’ve got an election next year. The people of this country should decide the President next year, not Adam Schiff and Nancy Pelosi behind closed doors, for goodness sake.”

On Adam Schiff’s attempt to create a false impeachment narrative:

“Would we have heard a different alternative if there was no transcript out there? [Adam Schiff] would have read [the report] as if it was the whistleblower’s direct knowledge of what happened. And it wasn’t. It was a made up lie, it was a disgrace, it shouldn’t have happened, but it shows you how [Democrats] are going to conduct things behind closed doors, which is why [Republican] members that are in those hearings come out and they say something completely different than the narrative that Schiff is giving to the press.”

On Pelosi caving to the radical left’s impeachment demands:

“The President will not be forced from office. Again, there’s an election next year. But, I think Pelosi is so far down a road where her radical left has wanted to impeach the President from the day he got elected. They didn’t care about the facts, there are no facts of high crimes and misdemeanors, but I think they’re on a drum beat so far down where AOC is driving this train in the far left and Pelosi is not running the House right now, they are…I think [impeachment] is inevitable. And it’s a disgrace, but that’s where [Democrats] are.”

“…I saw the video [allegedly shown at a conference at Trump Doral] and it’s disturbing. I condemn it at the highest level. First of all, the President and his campaign had nothing to do with this, but where it came from, I think they ought to be accountable, whoever was responsible for putting it together and showing it. There’s no place for that, on either side of the aisle, Republicans or Democrats, shouldn’t entice that kind of political violence or glorify that kind of political violence.”