WASHINGTON, D.C.—House Republican Whip Steve Scalise (R-La.) joined Fox News Channel’s Your World with Neil Cavuto to condemn the violent mobs attacking Members of Congress at the White House last night and the violence in streets across the country where Democrat local elected officials have shown an unwillingness to protect their own communities.

As Democrat leaders fail to condemn these actions or apologize for their dangerous rhetoric, Whip Scalise outlined the consequences if Joe Biden and Nancy Pelosi continue to appease the radical left base of the Democrat Party, including their support of socialist policies and their tolerance of the violent, radical left. 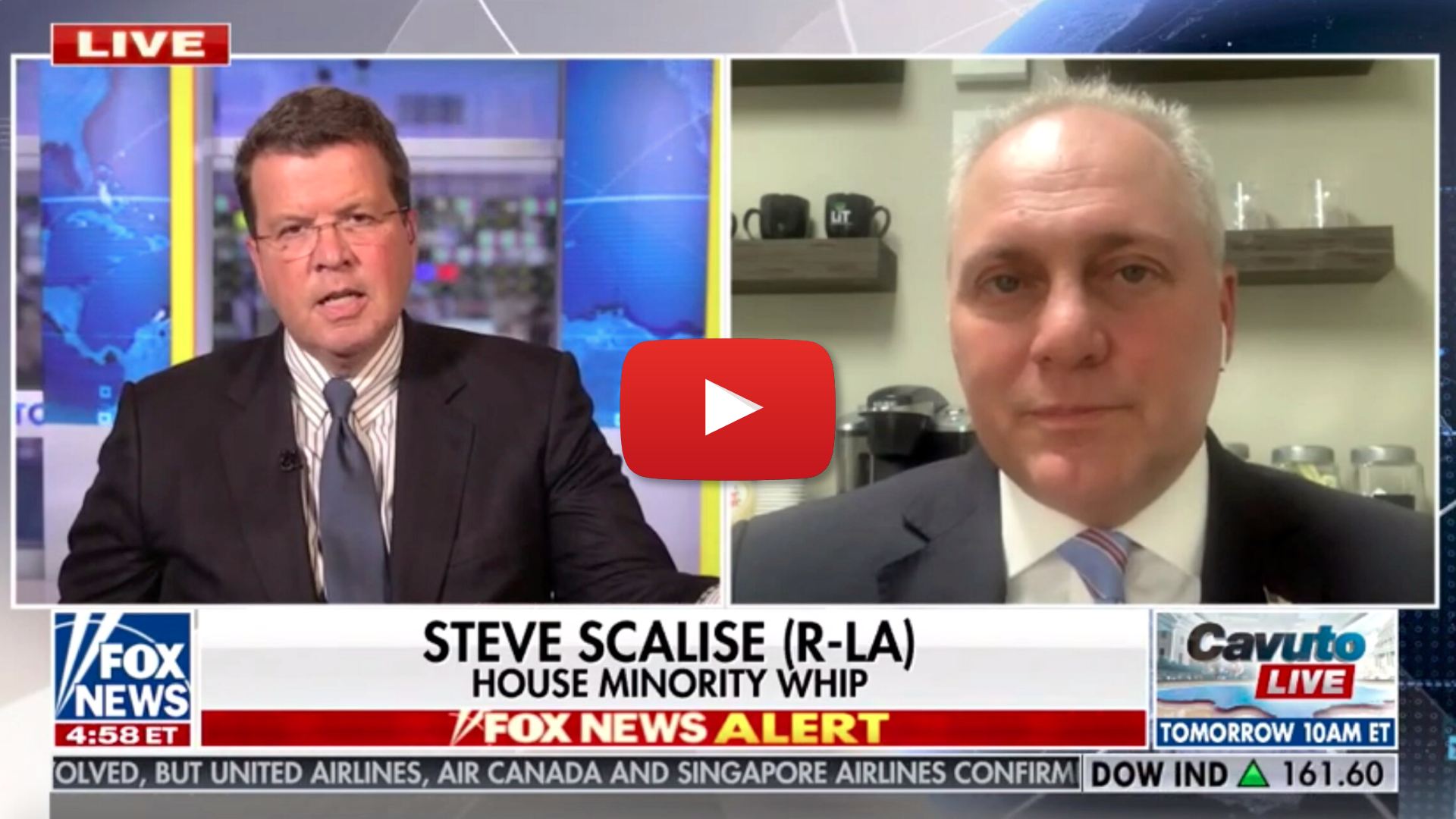 On the dangerous consequences of Democrat politicians embracing the violent mobs:

“And when you see this, I mean, look, we know how this can end. I mean, some of these mobs, when you see them out there throwing bricks at police, they’re injuring people, they’re killing some police. They’ve blinded police, and yet they keep doing it. And this is where you’ve seen President Trump very vocal that we have got to stand up against it. And, for whatever reason, Joe Biden won’t stand up against it. I think people are fed up with seeing this kind of mob rule, anarchy in the streets. I mean, you can peacefully protest. That was no peaceful protest. When you’re trying to hurt people, potentially even killing people, it has consequences, and it’s got to end.”

On President Trump’s address at the White House:

“It was a wonderful ceremony. And you heard so many different speakers and very uplifting messages. The President talked a lot about America’s promise, some of the great things that we’ve already done. And you had some of those people there in the crowd who the President helped, you know, get out of jail for life sentences for one-time nonviolent offenses, those kinds of things.

“And then, ultimately, you go to the vision of how we’re going to get this country back on track as we confront COVID. And President Trump has done a phenomenal job confronting this hidden enemy, getting a vaccine. We’re on the brink of a vaccine right now because President Trump got red tape out of the way to say, let’s go, and put all the weight of the federal government behind this.”

“[Protestors] were blowing bullhorns and things before the President spoke. And when he spoke, you really couldn’t hear them, but you knew that they were out there, and they were trying to cause a stir. But, again, there’s one thing to have a First Amendment right to peacefully protest. It’s another thing to try to hurt people, injure people, or even worse in the case of Rand Paul, and even my colleague Brian Mast, where they were literally just running up to people, getting in their face, and trying to start a confrontation. There’s no place for that in America. That’s not what our country is about.”

On the failure of Democrat politicians to condemn the riots and violence in several cities across the country:

“People are definitely paying attention to the violence in the streets in some of these large cities, where the mayors have let mob rule take over. And it’s very clear what’s going on out there. Some mayors are allowing it and some mayors aren’t. But where it’s happening, everybody’s watching that this is what Joe Biden’s condoned for so long. And this is where you can’t play it both ways. And I think Joe’s been trying to be too cute. On one hand, he will go and tell privately groups, and it’s on video, that he will redirect money away from police. He said it. It’s on video. And then he realizes it’s not popular. And he comes out and tries to say, ‘Oh, but I’m not for defunding police.’ Does he think people are stupid? I mean, look, if you’re going to redirect money away from police, you have just defunded police. It’s the same thing. He was saying that when he thought nobody was watching. And then all of a sudden, they see the polls go south, and he tries to change his tune publicly.”

On what’s at stake if the Joe Biden continues to appease the radical left:

“People aren’t going to let him get away with playing both sides. They know what he’s really about and who’s around him. It’s really who’s calling the shots behind Joe Biden. And I think that’s what we’ve seen this whole debate. He campaigned not really on an agenda, but just on, hey, he’s a nice guy that can beat Trump. And then, all of a sudden, you realize he’s embraced the entire Bernie Sanders agenda. Bernie, who lost, is now running the show. AOC is probably going to be his Secretary of Energy. Her agenda, by the way, the Green New Deal, is being carried out in California, where they have rolling blackouts. That’s what that gets you. You want rolling blackouts in America, where you don’t have your power when the wind isn’t blowing and the sun’s not shining. That’s California right now. That’s not where America wants to go.”