Whip Scalise criticized Democrats for pursuing their impeachment obsession instead ofmoving on and taking care of the business of this country. Whip Scalise highlighted how the House should be lowering drug prices, paying our troops, and securing our Southern border. Instead, Democrats are focusing on taking out the President. 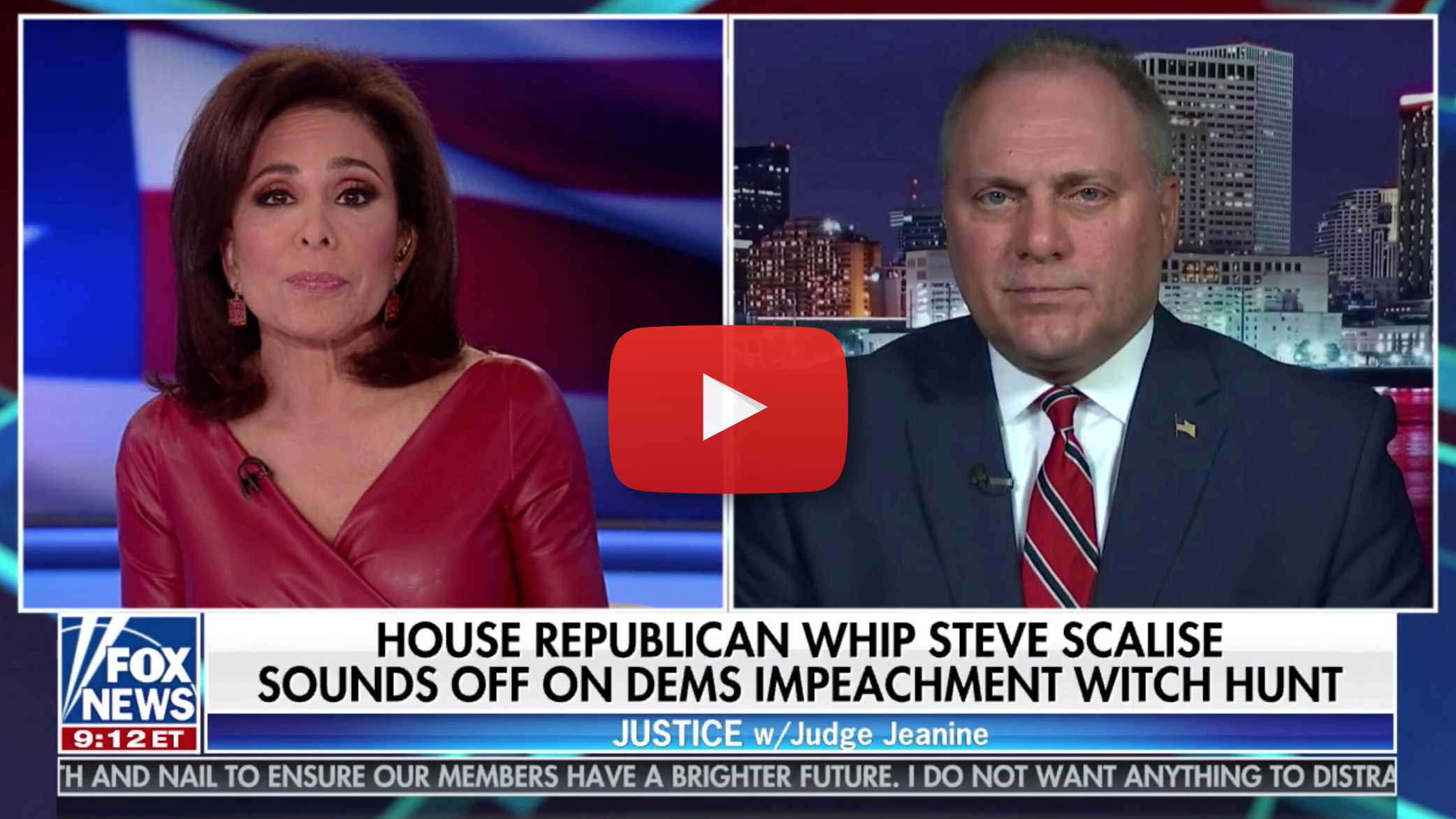 “…It’s the fact that [Democrats] are denying the ability for both sides to participate. Schiff has veto power over witnesses that are brought forward by Republicans. Schiff can literally kick the President’s legal counsel out of the room if he so chooses. And, in fact Judge, earlier this week, Adam Schiff directed one of the witnesses to not answer certain questions asked by Republicans. That’s the kind of Soviet-style impeachment process I’m talking about, where one side is literally shut out so [Democrats] can get this false narrative – leaking things out that are later, in many cases, undermined by Republicans that were in the room –  because Adam Schiff won’t open up the room. In fact 75 percent of the voting Members of Congress are not allowed to be in that room.”

On the tainted impeachment process Democrats are using to reverse the results ofthe 2016 election:

“It’s a completely tainted process and in fact, [Democrats] are starting off trying to find facts. There is no crime as you pointed out. With Clinton, with Nixon, [impeachment] started with an actual crime that was committed. First you had the Mueller investigation, where for 22 months [Democrats] meandered around trying to find something. [Democrats] thought that was going to be their ticket to impeachment and [there were] no charges, no crimes. So, instead of moving on and taking care of thebusiness of this country, they’re continuing on because they want to take this President out. They wanted to impeach him from day one, so they started with this so-called whistleblower. As you point out, in fact, even the Inspector General said the whistleblower has a political bias. … And so, if that bias is there, shouldn’t people be able to know about it? But nobody can find out about the whistleblower except Adam Schiff. So, they have these closed-door meetings. So literally, they’re trying to impeach a President, reverse an election, behind closed doors. We don’t do this in the United States of America. That’s theSoviet-style justice I’m talking about.”

On President Trump helping Ukraine root out corruption and stand up to Russian aggression:

“In fact, one of the things that the National Defense Authorization Act from last year requires, is that if the federal government gives taxpayer money to a foreign government like Ukraine, the President has to first certify that that country’s rooting out corruption. That’s what President Trump and President Zelensky were talking about. It’s the law, and oh by the way, Adam Schiff and Nancy Pelosi voted for that law that requires the President to make sure our country’s rooting out corruption before they send taxpayer money. We ultimately sent the money, but clearly there was corruption in Ukraine and President Trump and President Zelensky were talking appropriately about how to root out corruption – especially corruptions that related to the 2016 Russian [election] interference that happened when Barack Obama was President

“For that, they want to impeach a President. And look, there were only two people who participated in this call that all of this is about. The whistleblower, and the, you know, witness after witness in secret, giving their own version of what they think a call was about. The two people on the call said there was nothing wrong. In fact, President Zelensky himself said publicly there was no pressure and he got the money. There was no quid pro quo. In fact, President Trump was carrying out his duty to make sure that they’re rooting out corruption in Ukraine and he was congratulating President Zelensky on getting elected on a platform of rooting out corruption. Zelensky even thanked President Trump for selling the Javelin missiles which by the way, allowed them to stand up to Russia. President Obama wouldn’t sell those same Javelin missiles when you had Ukraine being attacked by Russia. [Russians] were invading the Crimea. I don’t know why Barack Obama wouldn’t sell those Javelins, somebody ought to ask that question, but President Trump did and [he] helped Ukraine stand up to Russia. He ought to get credit for that.”

On focusing on real problems facing American families such as lowering drug prices and paying our troops:

“We should be lowering drug prices. We had a bill, by the way, a package of bills that came out of Committee unanimously to lower drug prices. Every Republican and every Democrat [voted for those bills]. We would be paying lower drug prices today, but Speaker Pelosi is infatuated with impeachment. Securing our border, making sure our troops have the tools they need, none of that’s getting done because [Democrats] are infatuated with taking out a President. Well we have an election next year, let the people of this country decide that.”