WASHINGTON, D.C.—House Republican Whip Steve Scalise (R-La.) joined Fox News Channel’s The Daily Briefing with Dana Perino to blast Speaker Pelosi for keeping Rep. Eric Swalwell on the House Intelligence Committee when his reported ties to a Chinese spy pose a dangerous threat to U.S. national security. Whip Scalise criticized Democrats in Congress for turning a blind eye towards China and for refusing to aggressively push back against their alarming intrusion. 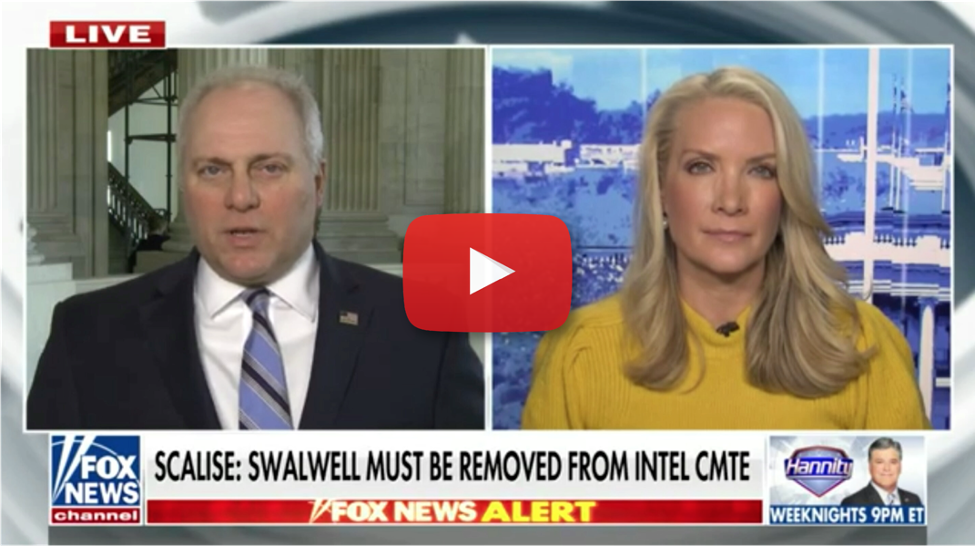 Click here or on the image above to watch the interview.
On the Democrat Party turning a blind eye towards China:

“First of all, if you look the Democrat Party up here in Washington, they’ve got a serious China problem. Pelosi herself has been very soft on China. [Republicans] were putting together a bipartisan commission to look into China’s activities on many fronts, from COVID-19, theft of intellectual property, all the way down to attempted spying, and successful spying. Senator Feinstein had a spy, a Chinese spy, for over 20 years driving her around, and yet Pelosi pulled the plug on that commission, Dana. Leader McCarthy went forward anyway and Chairman McCaul put out a report that really is scathing and alarming. If any American reads it, they would be very concerned about China too. But for whatever reason, Speaker Pelosi won’t continue to be aggressive on China and then she won’t pull Swalwell off the [Intelligence Committee.] There are serious questions that she needs to answer, she hasn’t answered. Swalwell himself should be answering some of these very basic questions but it raises alarms about a deeper rift and problem within the Democrat Party in Congress that they have a blind eye towards China.”

On Speaker Pelosi’s refusal to answer questions regarding Rep. Swalwell’s position on the House Intelligence Committee:

“I hope the [FBI will brief the Intelligence Committee], because, you know, it took weeks for Leader McCarthy to get that briefing and raised even more concern to him than before he had briefing. And again, did Speaker Pelosi know about the relationship that Eric Swalwell had with this Chinese spy before she put him on the Intelligence Committee, potentially compromising that committee? Fang Fang, the spy, actually infiltrated Swalwell’s office. Were there classified documents from the Intel Committee that were exposed and available for that Chinese spy in his office to get access to? All these are very basic questions that deserve answers and so far, Speaker Pelosi has been conspicuously silent on these fronts.”

On how keeping Rep. Swalwell on the House Intelligence Committee poses a threat to national security:

“America is more at risk if we don’t have a united front taking on China when they do things like put spies in offices of Members of Congress. Again, Eric Swalwell was not the first person that they were able to infiltrate. Senator Feinstein, for 20 years, had a Chinese spy embedded in her office, and in fact, who was driving her around probably listening to some very sensitive information and then feeding that right back to the Chinese Communist Party. This has been going on for a long time. President Trump has been willing to take on China, but why aren’t Democrats in Congress willing to do the same thing? It puts America at risk when they’re not aggressively pursuing this like we are.”

“It should be alarming and raise red flags to everybody that this isn’t just at the Congressional level, they literally were infiltrating Eric Swalwell’s office when he was a councilman in California. Mayors supposedly had relationships inappropriately with Fang Fang the Chinese spy. What is going on over there, especially in the Bay Area, where you have this outbreak of China’s intrusion and why aren’t they alarmed and raising the same red flags that we are?”