WASHINGTON, D.C.—House Republican Whip Steve Scalise (R-La.) joined Fox News Channel’s America’s Newsroom as Democrats continue to pursue their shameless attempt to reverse the results of the 2016 election. Whip Scalise pointed out Democrats’ long history of false, unsubstantiated accusations against President Trump, and called out Speaker Pelosi’s refusal to allow a vote on an impeachment inquiry on the House Floor. 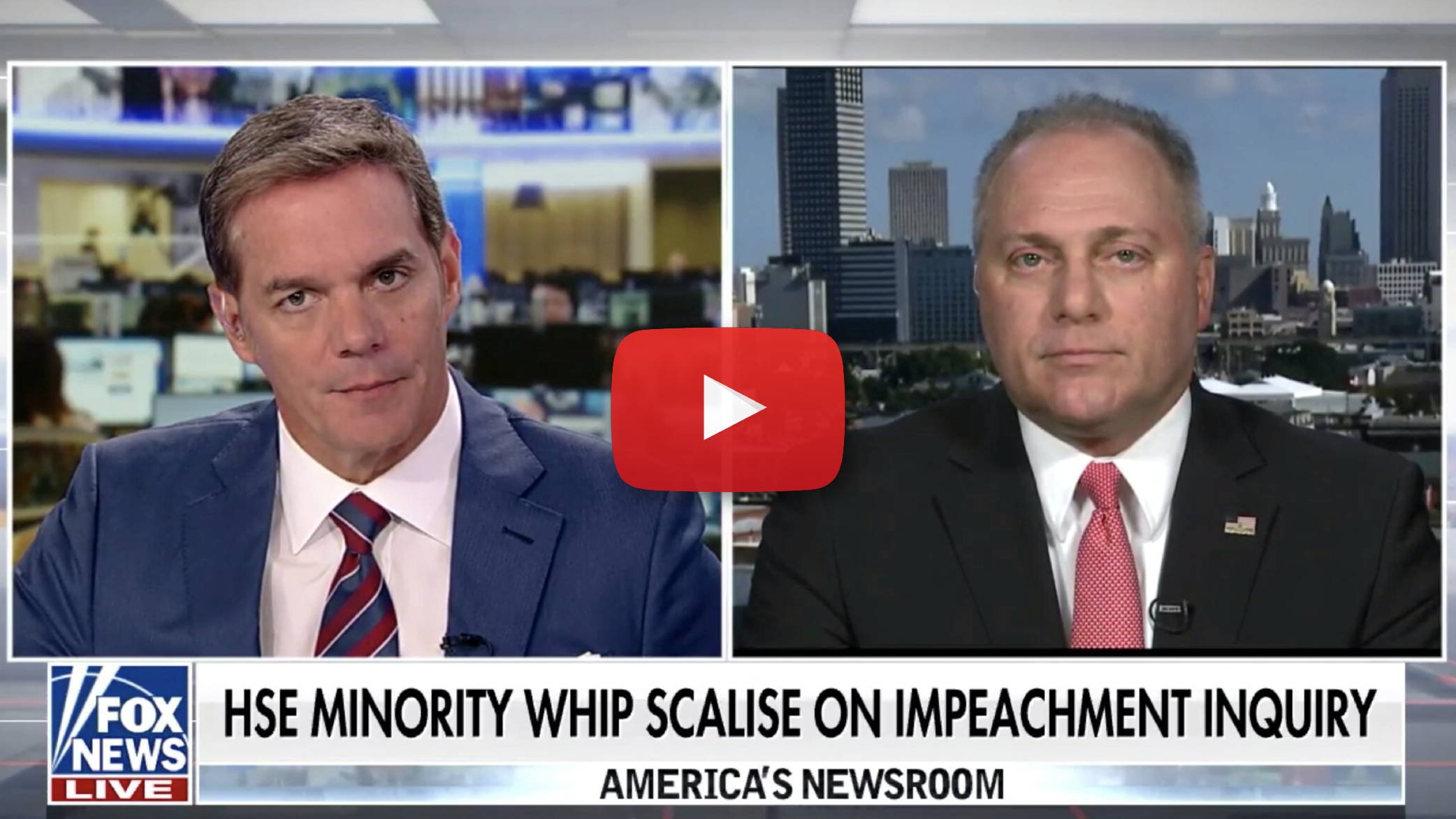 On Nancy Pelosi’s irresponsible attempt to reverse the results of the 2016 election:

“The [Republican] strategy always is to get the facts out. Speaker Pelosi jumped the gun two years ago. She has been, and many of her members have been, calling for impeachment and she has been enabling that. And in fact, it was a tweet from [Alexandria Ocasio-Cortez] over [last] weekend that was really kind of threatening and saying that the Democrats are the ones who are committing a scandal by not impeaching the President. And low and behold, two days later, [Pelosi] calls for impeaching the President. Without listing a single high crime or misdemeanor. That’s what’s so irresponsible about this. It really is an abuse of power to just constantly go after a President and say we’re going to impeach him even if there is nothing to impeach him on. And [Nancy Pelosi] and many of her leaders said that. In fact, Jerry Nadler, the Chairman of one of her powerful committees, said a few weeks ago he hopes to bring impeachment proceedings on to the [House Floor] by the end of this year and when pressed to say name a single high crime or misdemeanor, the Majority Leader [Steny Hoyer] at the time, couldn’t even list one. They just have been investigating this President since the day he took office because they don’t like the results of the election.”

“Whatever it is, it’s still not high crimes and misdemeanors. They have been throwing this innuendo out there and Adam Schiff was on television yesterday, throwing out even more baseless accusations. And keep in mind, he was the one who during the Mueller investigation for two years promised that he had more than circumstantial evidence that a crime was committed and there was no crime committed. He never, by the way, brought forward that mysterious information that he had because it never existed. And then today look, at the committee hearing the other day, he started making up a story that later even he admitted wasn’t even fact to try to accuse the President of something that the President didn’t do. At some point there’s got to be a level of responsibility.”

On the unprecedented action of releasing transcripts of conversations between world leaders:

“I wish they wouldn’t have released the transcript of a conversation with the President and another foreign leader because it’s not a good precedent to set. But the call itself, the transcript itself, didn’t show any crimes, didn’t show any quid pro quo which is what they were saying it was going to show. The idea that now they expect every conversation between the President and a world leader to be made public? Are they going to go back in time and do that with President Obama or any other President? Frankly, I hope they don’t because it is not a good standard to set.”

On Nancy Pelosi’s refusal to formally vote on an impeachment inquiry on the House Floor:

“Nancy Pelosi, by the way, didn’t even hold a vote on the House Floor to start impeachment inquiries which has always happened. The three other times in the history of our country that impeachment came out of a committee it started with a vote of the full House. So I’m not sure why she is trying to shield her own members from that vote. You can ask her that. It is a little odd because it’s never happened before.”