WASHINGTON, D.C.—House Republican Whip Steve Scalise (R-La.) joined Fox News Channel’s Fox & Friends to denounce the violence in cities across the country where Democrat local elected officials have failed to preserve safety and security in their own communities. Whip Scalise blasted Democrat leadership for failing to condemn the violence or the radical “defund the police” movement which weakens the rule of law and puts people at risk.

Whip Scalise also discussed the devastating impacts of Hurricane Laura as he prepares to join President Trump during his visit to Southwest Louisiana, and committed to working with local, state, and federal officials to ensure Louisiana has the resources it needs to recover. 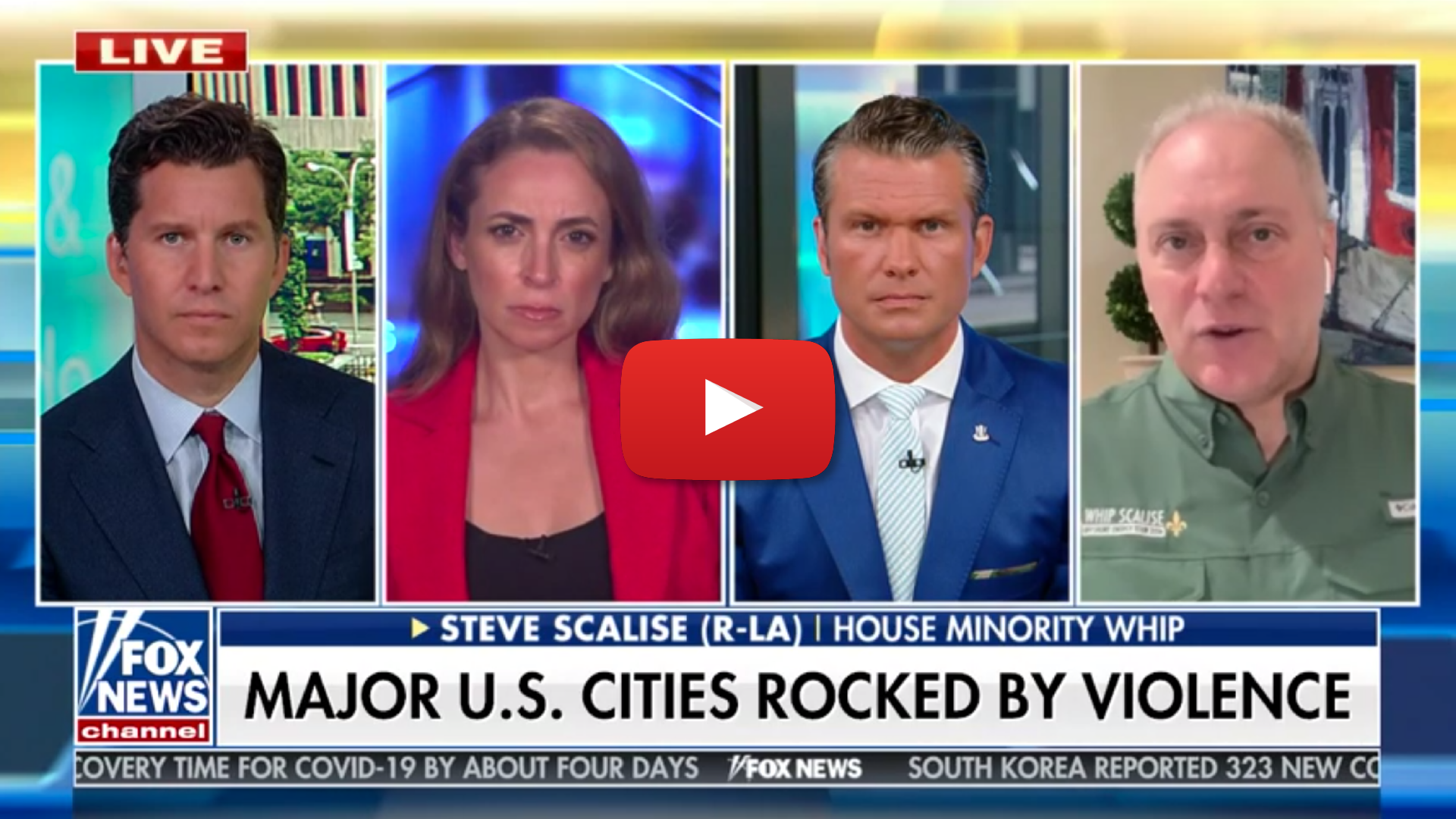 Click here or on the image above to watch the interview.
On the dangerous consequences of Democrat leadership embracing the violent mobs:

“People are watching all across the country when they see this this mob rule and again, you have one thing of peaceful protesting which is something that’s part of our great democracy, but then this violence in the streets, it’s unhinged. It’s being tolerated by the Democrat leadership right now. Joe Biden has been looking the other way and people don’t want this for our country. They don’t want to have this idea that if you disagree with what liberals say then you literally are cancelled and they want to yell at you, and they want to throw things at you, and confront you physically, and try to burn down houses. There’s no place for that in America.”

“People want and people deserve to have safety and security in their communities and in their homes. And, you know, look, if Joe Biden’s going to look the other way, President Trump’s made it very clear he’s going to protect your safety and security. It’s one of his top priorities, and it’s a duty of the Commander-in-Chief and he’s offered to help those cities that have let their towns get overrun by mobs. Some have basically said they don’t want the help. They’d rather their city get torn down for some political message and people don’t want that. Whether you’re Democrat, Republican, Liberal, Conservative, you want to be able to peacefully protest. You don’t want your community burned down because somebody disagrees with your philosophy.”

On Joe Biden’s failure to condemn the riots and violence in several cities across the country:

“It’s really bizarre and concerning. Joe Biden has made, I think it’s a calculated decision to look the other way, and he’s bought in, by the way, to the Bernie Sanders left-wing agenda on all issues. And so, I guess on law enforcement it’s no different. Look, this is going to be a big issue in this campaign. But Joe Biden, when he didn’t think everybody was watching, was very clear. He said he wants to redirect money away from police. That is no different than defunding police. Anybody that tries to tell you differently, did they not even take a basic economics course? And so, the idea of re-directing or taking money away from police, especially at a time like today, I think it’s concerning to most Americans. Again, this transcends political philosophy. So, Joe Biden’s bought into it. Donald Trump’s made it very clear he’s going to keep our community safe; he’s going to stand with our good men and women in law enforcement. If there’s a dirty cop, you go root them out. But, by the way, go look at the cities where you’ve had the bulk of the dirty cops, you’ve got to address that in your own community, but then you have to back those law enforcement officers who are risking their lives. They risk their lives to protect us. They have an equal right to be able to go home and see their families as anyone else does.”

On the devastating impacts of Hurricane Laura in Southwest Louisiana:

“I’m actually going to be with the President in a few hours out in Lake Charles. I flew over that area yesterday and [there’s] just devastating impact in so many parts of Southwest Louisiana. We went to Cameron Parish where the eye of Hurricane Laura touched ground. I was with Clay Higgins, the Congressman from the area, and our Attorney General Jeff Landry, and then we went to Lake Charles, and you could just see so much devastation. And, you know, there are a lot of people without electricity, without water. The water systems in Lake Charles were decimated as well. And so, they don’t even have running water right now. They’re working on a number of different fronts. We’re going to be providing help. The President’s coming down to offer any assistance he can, and our Governor is going to be there as well. So, you know, we’re going to be working right on the ground with the local officials to get them whatever they need to get their community back up and running, but keep the people of Southwest Louisiana in your prayers and anyone else who was touched by the devastation of Hurricane Laura.”