WASHINGTON, D.C.—House Republican Whip Steve Scalise (R-La.) joined Fox News Channel’s The Faulkner Focus to discuss Democrats’ massive $1.9 trillion package filled with liberal priorities that have nothing to do with providing COVID relief to struggling students, families, and small businesses. Whip Scalise noted that less than 10% of the $1.9 trillion plan goes to combatting COVID-19 through public health such as national vaccination program, tracking, and more testing.

Whip Scalise also demanded accountability from New York Governor Andrew Cuomo for his deadly nursing home order that forced COVID-19 positive patients back into nursing homes, followed by the massive cover up by his administration to hide Governor Cuomo’s failures. 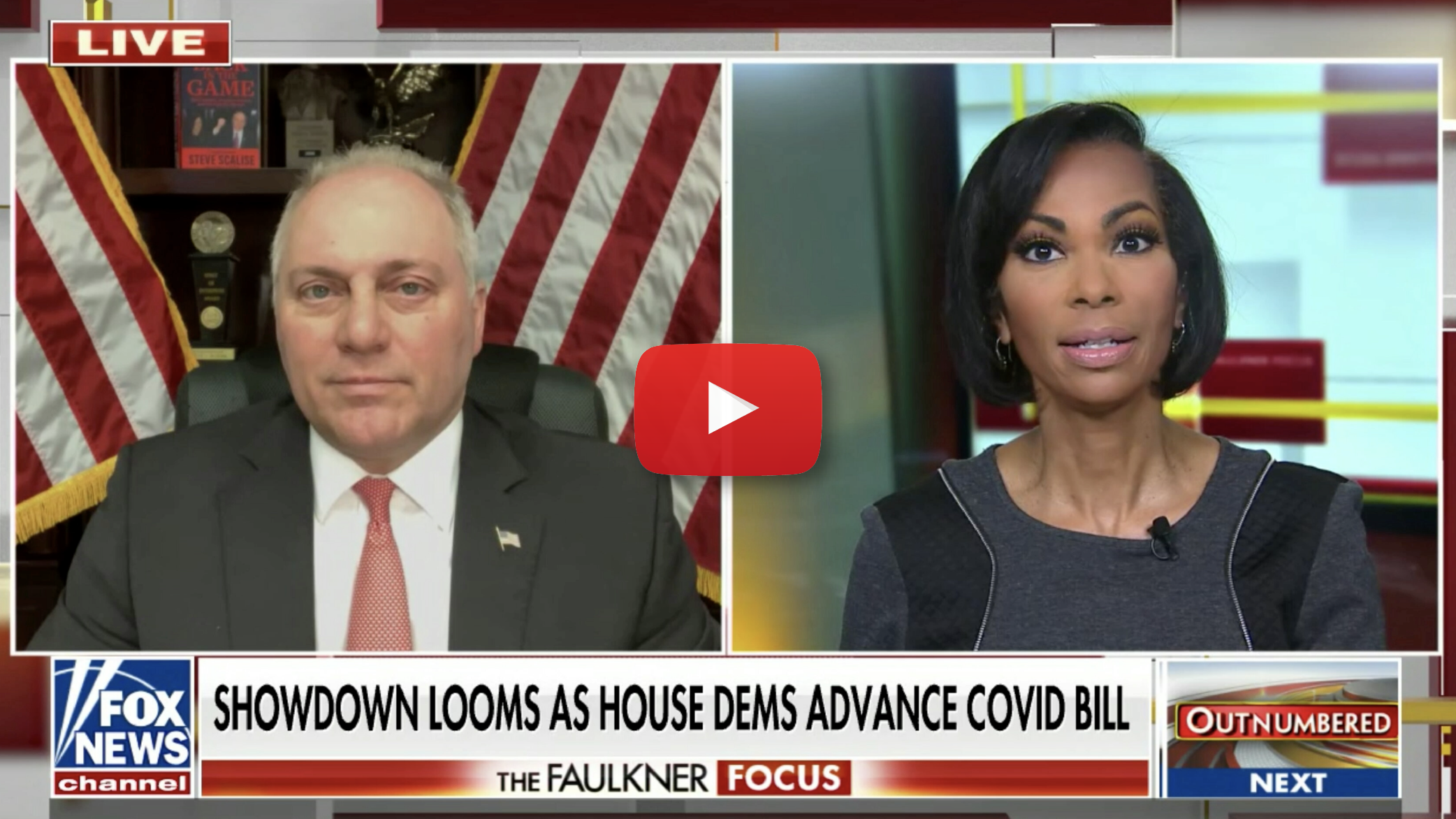 On the nearly $2 trillion package of progressive priorities Democrats have rushed to bring to the House Floor:

“I hope that everybody in America is taking a look at some of the liberal pork in this bill and what [Democrats] are trying to do all in the name of COVID relief, and boy, we need to rush this through, didn’t we hear this before? You know, you have to pass the bill to find out what’s in it. You’re going to be finding out a lot of things that are very disturbing. Less than 10% of the money in this $1.9 trillion bill is for public health. And in fact, if you look at the school’s money, we ought to be opening up every school in America right now. The money is there to do it. There is over $60 billion still out there from the previous bipartisan bills to safely reopen schools. They’re going to give another $100 plus billion and you saw the President’s spokesperson yesterday said it’s not even going to require them to open up schools. They just get the money. They don’t have to educate our kids in the classroom which is devastating millions of kids across America. That’s what’s in this bill, you know, $15 minimum wage, bailing out of failed states like New York.

“Think about this, Governor Cuomo still won’t release the [nursing home] data. We had an amendment to require Cuomo, in this bill, to release the data on nursing home deaths. He still won’t give that. Even Democrats are calling for his removal. California has a $10 billion surplus right now. Gavin Newsom was bragging about that last week. $10 billion surplus in California. This bill is going to borrow money from our kids to give Gavin Newsom billions more. This makes no sense. It’s destructive to our economy. Larry Summers, not a conservative economist, said that it could actually lead to more devastation in our economy long-term including slow growth and lost jobs. I mean, this bill is really devastating for America. We need to defeat it and focus on helping families and small businesses get back open and schools get back open.”

On the lack of immediate relief in Democrats’ COVID package to safely reopen schools:

“Right now, [the unspent money] is just sitting idle. There’s over a trillion dollars, Harris, in overall relief package money that’s unspent from all the bills we did in a bipartisan way under President Trump. You know, the Paycheck Protection Program alone was a great lifeline. It saved over 50 million jobs. There is money left over even in that program. There is still a lot of money unspent from previous bills that we passed. [Democrats] want $1.9 trillion not to reopen schools and help businesses. Again, the Congressional Budget Office says the school money, 95% of that money, won’t even be able to be spent until 2022. Do you really want to delay school openings even more until next year? If you vote for this bill, any Member of Congress that votes for it, is voting to delay school openings and just give away money that we don’t have that’s going to be borrowed from our kids to slow economic growth.”

On holding Governor Cuomo accountable for covering up data on his deadly nursing home order:

“This is something that I started with some of my colleagues back during the summer. You know, you were talking about over eight months ago we started asking Governor Cuomo for the data because I was hearing from New York families that were devastated. They lost their loved ones in nursing homes and then we found out, we uncovered that he gave an order, we’re talking about back at the beginning of the pandemic against CDC guidance. Governor Cuomo gave a mandate that said if you’re a nursing home patient in a hospital COVID positive you have to be sent back to the nursing home. And remember, this is the most vulnerable population and what happened is they sent COVID positive patients back and it seemed like in many of these nursing homes almost every person in that nursing home got COVID from the COVID positive patients because of Governor Cuomo’s orders.

“So instead of giving us the facts, he started stonewalling. And as we see with so many of these scandals, the scandal might be really bad, but the cover-up is even worse. And we exposed just a few days ago his top aide admitted that they covered up the data because they didn’t want the federal government finding out. My god, I mean, you are talking about thousands of families who are devastated because they lost a family member, a father, mother, that they never should have lost because of Cuomo. And instead of confessing up, he is covering this up even more. It’s a major scandal and I wish he would just be honest with us about the data.”

On the massive cover up by Cuomo’s administration:

“President Biden, when this story broke and we’re talking about the story where his top aide admitted they covered up the data, she was talking to Democrat state senators in New York thinking nobody else was listening in and they leaked it I think because they are disgusted by Governor Cuomo’s actions. But President Biden, that day, Cuomo was in the White House, President Biden called Cuomo the ‘gold standard’ for the Governor’s leadership. My god, if killing thousands of people in nursing homes who never should have died is the gold standard for President Biden – is that really the direction that they want to go?

“How about you focus on getting the facts out there. We had an amendment in [the Energy and Commerce Committee] last week to require that Cuomo release the data. Every Democrat voted against it. I don’t know why they want to be complicit in this cover-up. But the families want answers, and they deserve answers. This never should have happened. And I think you’re just seeing the tip of the iceberg. [Governor Cuomo] is threatening Democrat assemblymen right now, threatening them trying to get them to cover up and be part of that. They don’t want to be part of this cover-up. You’ve got AOC and DeBlasio even saying now that this needs to be investigated. This is a major scandal. It should have never happened. Thousands of people died in New York who never should have died.”