WASHINGTON, D.C.—House Republican Whip Steve Scalise (R-La.) delivered a speech on the House Floor against House Democrats’ resolution to remove Rep. Marjorie Taylor Greene (R-Ga.) from committees. Whip Scalise denounced the comments made by Rep. Greene prior to her election and made it abundantly clear that the comments she made are completely inappropriate.

However, the effort to block a duly elected Member of Congress from serving her constituents on House committees based off comments made prior to the time she was elected by her voters sets a dangerous new precedent in the House. Whip Scalise urged Democrats to withdraw the resolution and to focus on fighting for the hard-working American people who are counting on Congress to come together. 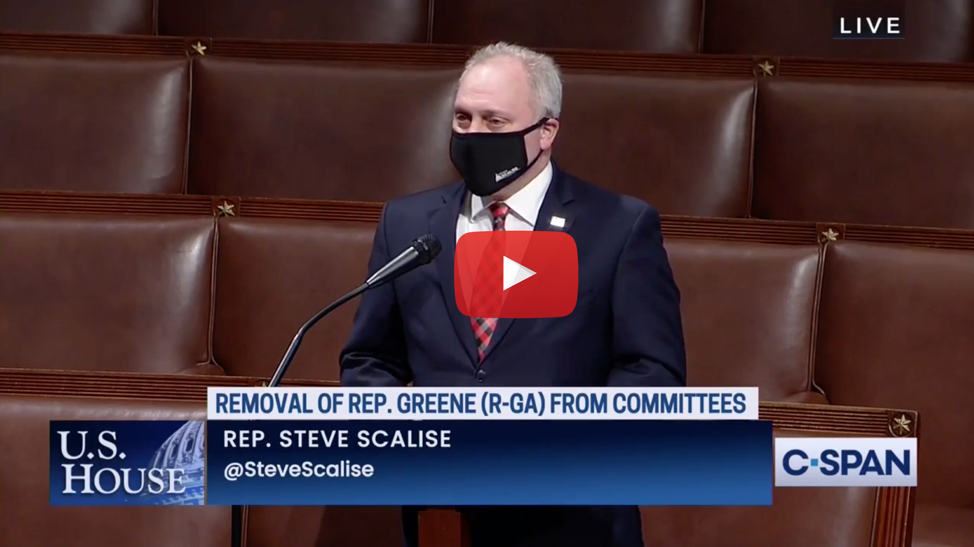 Excerpts from the remarks:

“Madam Speaker, I’ve been clear for a long time that the comments made by Mrs. Greene prior to being elected a Member of Congress are completely inappropriate. And in fact, I’ve spoken directly to her to express that and we had a long conversation, frankly, similar to the one that we just heard on the Floor a few minutes ago, Madam Speaker. Where we heard Mrs. Greene herself come and give a full account of things she’s done in her past. In fact, at the end, she said ‘Jesus died on the cross to forgive me of my sins.’ She’s actually held herself to account as many of us have as well.

“I wonder if that same new standard that is being talked about today is anticipated to be applied equally by the majority’s side. Of people who have done things egregious and haven’t, haven’t given account. And in fact, done those things as sitting Members of Congress. Not what happened in 2018, 2019 that we all decry.

“But Madam Speaker, if the things that happened in 2018 and 2019 were so egregious that they went the unprecedented step of removing a Member of Congress from all committees by the majority party against someone in the minority party. If that was so egregious, why then did not a single Democrat object to that last week when that issue came before this Congress, on this Floor, and she was added to those committees? This is the resolution that added her to the committees. Not a single Democrat last week, not in 2018 or [2019], last week, not a single Democrat objected. But now, this new standard seems to be applied.”

“Madam Speaker, we need to stop casting stones at each other and rise to the level where we’re going to start spending every day on this House Floor, not fighting battles of the past, but fighting for the hard-working families of this country who are counting on us to come together. I ask that the leadership withdraw this resolution and let’s get back to work for the American people. I yield back the balance of my time.”