WASHINGTON, D.C. — Today, House Republican Whip Steve Scalise (R-La.) joined Fox Business Network’s Kudlow to discuss how President Biden and Speaker Pelosi’s big government socialist spending spree would devastate the U.S. economy, reverse American energy independence, and hurt middle class families. Whip Scalise called out President Biden for lying to the American people about the true cost of his multi-trillion-dollar legislation and emphasized that Democrats’ radical agenda would cause the price of everyday household goods to skyrocket. In addition, Whip Scalise highlighted the dangerous and expensive provisions in Democrats’ radical reconciliation bill, like adding 87,000 IRS agents to snoop on law-abiding citizens’ bank accounts and a natural gas tax that would raise household electricity costs by 30 percent. Whip Scalise pointed out that this year’s Thanksgiving will be one of the most expensive celebrations in American history due to Democrats’ rampant spending. 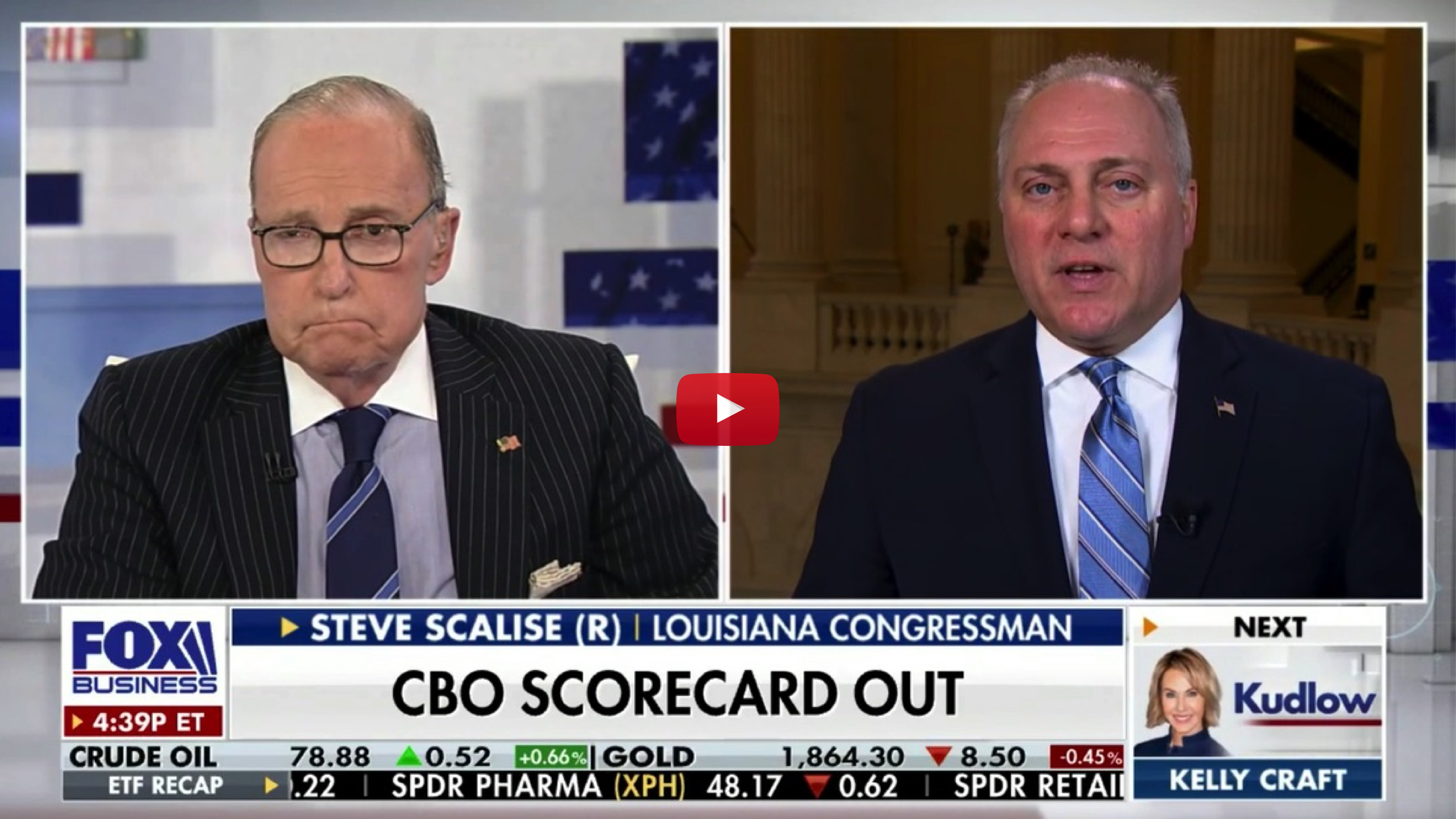 “I know some parts of that CBO score were already out. Some are rolling in right now. One of the things that the University of Pennsylvania’s Wharton study does is it takes out the budget gimmicks. We all know no matter what the CBO says, they put budget gimmicks in to deliberately try to mislead them [and] make it look different. So, the Wharton study really shows, when you take out the gimmicks, you end up with about $4.5 trillion of spending with about $1.5 trillion in new taxes. Both, by the way, are devastating to our economy. [It] will jack up inflation even higher, but that nets out maybe about $3 trillion in additional deficit [spending] if you look at it from that perspective.”

On President Biden breaking his promise not to raise taxes on families making less than $400,000:

“The 87,000 IRS agents, Larry, who has asked you or anyone – I’ve never gotten a phone call with people going, ‘Please put 87,000 more IRS agents out there.’ [They’re] looking into people’s bank accounts to find, for example, if your grandmother is making $10,000, she’s going to end up having somebody combing through to try to make her pay more taxes because they [need to collect] about $400 billion [in additional revenue] from those IRS agents. Early estimates we [got] from CBO said they’re going to be $280 billion short, just on that. That would be new deficit spending. It’s going to jack up inflation. It’s going to ultimately hurt a lot of families, as you’ve said from the beginning. And I think a lot of people now recognize [that.] Save America, kill the bill.”

On Democrats rushing to ram their radical tax-and-spending spree through the House of Representatives:

“But, they’re bringing it tonight, I think probably late tonight. By dark of night, 9:00 PM or so, you might see this bill come up for a vote and eke out of the House. But it’s really bad for America at any price – $1.5 trillion, even if the Senate goes for that – would be devastating to middle class jobs in America. We know the kind of damage that would do.”

On the drastically high prices that Americans will see at Thanksgiving this year:

“They’re just getting started with this, and this shows you a sneak peek into what their big government socialist agenda looks like. And by the way, that was the agenda that voters in states like Virginia and New Jersey rejected, and yet [President] Biden and [Speaker] Pelosi want to keep ramming more of that kind of stuff through, but take a look at why they’re doing it. So, first of all, they talk about the millionaires and billionaires. [Senator] Bernie Sanders yesterday even said there are provisions in this bill that are going to ultimately give big, big tax breaks to millionaires. He called it hypocritical. It’s in the bill, and they’re raising, again, your electricity bill, so if you’re using natural gas, you’re going to pay 30 percent more. That’s a gut punch to low and middle-income families so that they can then go and give tax breaks to millionaires. You can’t make this stuff up, Larry. And then you’ll look at some of the other provisions in the bill that would hit families when they’re already being hit with higher prices for gasoline at the pump. This will be the most expensive Thanksgiving ever. And even if a family can afford a Thanksgiving turkey, that’s going to become more expensive too – all of that [is] in this bill.”

“[I am] for all of the above sources of energy. We all know if you max out on wind and solar [energy], you’re not going to get 20 percent of your household electricity needs, let alone what you need for fuel [for] transportation on the road. I mean, if somebody is driving an electric vehicle, great for them. They’re not plugging that into a tree. They’re plugging it into a power source that probably uses fossil fuels. And they have a war, not Larry on all fossil fuels, [President] Biden only has a war on American fossil fuels. He’s calling and begging OPEC and Russia to produce more oil at the time when he’s shutting off production in America and killing pipelines in America while letting Russia build their Nord Stream 2 pipeline. People are seeing through this stuff. They know why they’re paying $150 to fill up their car when it cost them maybe $75, $80 a year ago – and they’re angry about it. They expressed that in Virginia, and [then] President Biden said he doesn’t care what they think. They’re just going to keep doubling down, put the foot on the gas, and keep ramming through this socialist agenda. This is what people are sick and tired of. They sure don’t want higher inflation. They will get it with this bill if it passes.”

On the Democrats’ radical policies:

“Those aren’t the American values that made this country the envy of the world. You know, it’s the work ethic that frankly is a gift of God to say, ‘You know, go out and produce things and help make this country an even greater country.’ You know, it’s [the] small business owner that’s struggling, and you know, they’re the last check if they own their business because they want to pay their workers first. [And] then they might want to expand their business, and yet this is a gut punch to them. It makes it harder for them to hire more people, and you’ve seen that. And by the way, what are they doing all this for? These social programs, paying people more money not to work – all of that [is] in this bill. All at the same time, they’re contemplating right now, you’ve seen it, where the Biden Administration is negotiating to give $450,000 checks per person to people who came here illegally.

“So, you’re going to be paying 30 percent more for electricity if you’re somebody that maybe makes $40,000 a year. You’re going to pay 30 percent more [on] your electricity bill this winter. And they’re giving all this money so that they can be doing things like giving $450,000 checks to people who came here illegally. I heard somebody say the other day [that] they’re going to go buy a plane ticket to Mexico City and come across the border illegally so they can get a $450,000 check. This is lunacy.”

On the worsening crisis at America’s southern border:

“They give amnesty to millions [of] more people in this bill. At the same time, they’re telling people you could get a $450,000 check. Do you think that’s going to slow down the tide of people coming here illegally? It’s going to mushroom it even higher. Our borders are being overrun. Our Border Patrol agents are telling you this is the worst crisis they’ve ever seen. And [President] Biden wants to just keep doubling down on it, while he’s making it harder for small businesses to stay afloat with higher taxes, while he’s making it harder for hardworking families to be able to stay afloat because they’re going to be paying more for everything. Inflation is going to get even higher with this bill.”

On the chances that Democrats’ tax-and-spending spree is passed in the Senate:

“I wouldn’t necessarily say it’s not going to pass. [It] might change. Let’s say they go to $1.5 trillion in new taxes, and maybe they pair some of the spending down. But if they keep doing the budget gimmicks to make it look smaller, but they still keep all of the budget items in there, that’s really where you ultimately have something that’s going to hurt this economy even more. It’s going to hurt middle class families because inflation is [the] biggest tax on lower-income people. Again, President Biden promised, ‘You wouldn’t pay a dime in new taxes if you made under $400,000.’ People are already paying more in Biden’s inflation tax. Then you throw [in] a natural gas tax. You throw in all these other taxes. It’s going to hurt middle and lower-income families the hardest at a time when they’re already struggling from President Biden’s inflation that’s already too high.”

On what President Biden should do after the tax-and-spending spree passes the House of Representatives:

“We ought to throw this bill in the trash can. You would see the economy take off like nothing we’ve seen, Larry. Tomorrow, President Biden [should say], ‘Look, I know it passed the House, but it would hurt the economy. It would hurt lower and middle-income families the hardest. We’re going to set this on the side and abandon it – not wait for a few months and sneak it through later – abandon it.’ That’s what they should do. The economy will take off like nothing we’ve seen.”