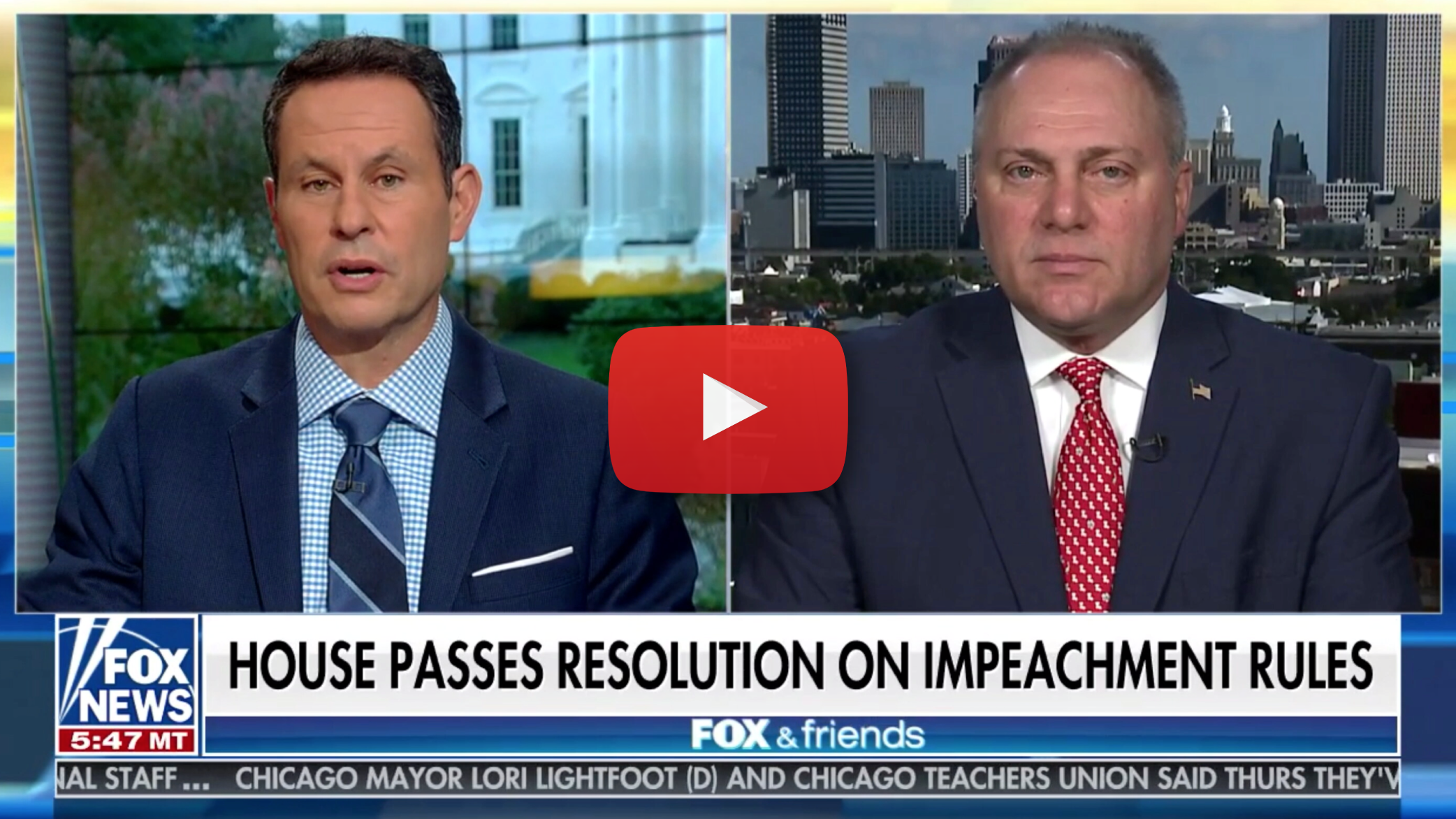 “Frankly, if you read the resolution, it allows, first of all, for Adam Schiff to continue going on behind closed doors, building this false narrative where they leak out certain things to try to mislead people. You talk to people that were in the room and you get a completely different response. And oh, by the way, over 75 percent of the voting Members ofCongress are not allowed in that room. Most of the American people don’t know what’s going on in that room. So, they continue that process and then, even if it goes to theJudiciary Committee, which we don’t know if it will – but if it goes to the Judiciary Committee, the Chairman has full discretion to deny, to veto witnesses. Veto power by theChairman never has happened before. Didn’t happen under Clinton, didn’t happen under Nixon. And even the President’s legal counsel by the way, Brian, the Chairman has thediscretion to kick the President’s legal counsel out of the room. Now if you want to call that a fair process, again, I equate it to Soviet-style justice because maybe in the Soviet Union they have a one-sided, closed doors, behind closed doors secret impeachment process. This is the United States of America. We deserve better than this. Our justice system works a lot different than this.”

“…In fact, as you mentioned, just this week Adam Schiff directed the witness, one of thewitnesses, to not answer questions. There were certain questions that were asked by Republicans on the Committee. So, Adam Schiff still holds full control over directing thewitness who can and can’t ask certain questions. Again, that’s unprecedented. But even the transcripts. Look, we had an amendment yesterday, and by the way, [Democrats] shot down every single Republican amendment because they didn’t want to work in a bipartisan way. But we had an amendment to say that all the transcripts should be released to thepublic. They rejected even that amendment. So you can see just how one-sided this is. I would like to ask any Member of the Committee, anybody who voted for that resolution yesterday, if they were falsely accused of a crime, would they want to subject themselves to those kind of unfair rules and processes. We don’t just have to talk about process, but that really matters a lot. And I think when you talk about what the President said, thePresident released the transcript of the call. We have all these hearings about what other people might have thought of the transcript, and in many cases people with a political bias against the President. President Trump released the call between him and [Ukraine President] Zelensky and even Zelensky said there was no pressure on the call. There was no quid pro quo. So that’s the genesis of this with the whistleblower.”

On Democrats attempting to impeach President Trump from day one, despite any evidence:

“We know from day one, the day that Donald Trump put his hand on the Bible to take theoath of office [Democrats] wanted to impeach him. There were Democrats in leadership in Congress who said they wanted to impeach him without any facts. There were never any high crimes and misdemeanors. There still, by the way, has never been a high crime and misdemeanor they laid out. It’s a hope – they had the whole Mueller investigation where they hoped they would find something and they didn’t. There were no charges because there was no collusion or obstruction, and so they keep going on. They hoped that there was quid pro quo, but then the President released the transcript and there was no quid pro quo. Instead of moving on and dealing with things like lowering drug prices, like paying our troops, making sure they have the tools they need, the Democrats won’t bring those bills to the Floor because they are infatuated with impeaching the President because they’re afraid he will get reelected. That’s not why you have impeachment.”