Whip Scalise highlighted Democrats’ long history of false, unsubstantiated accusations against President Trump and pointed out that Democrats have failed to assert a single high crime or misdemeanor that warrants impeaching a duly elected President. 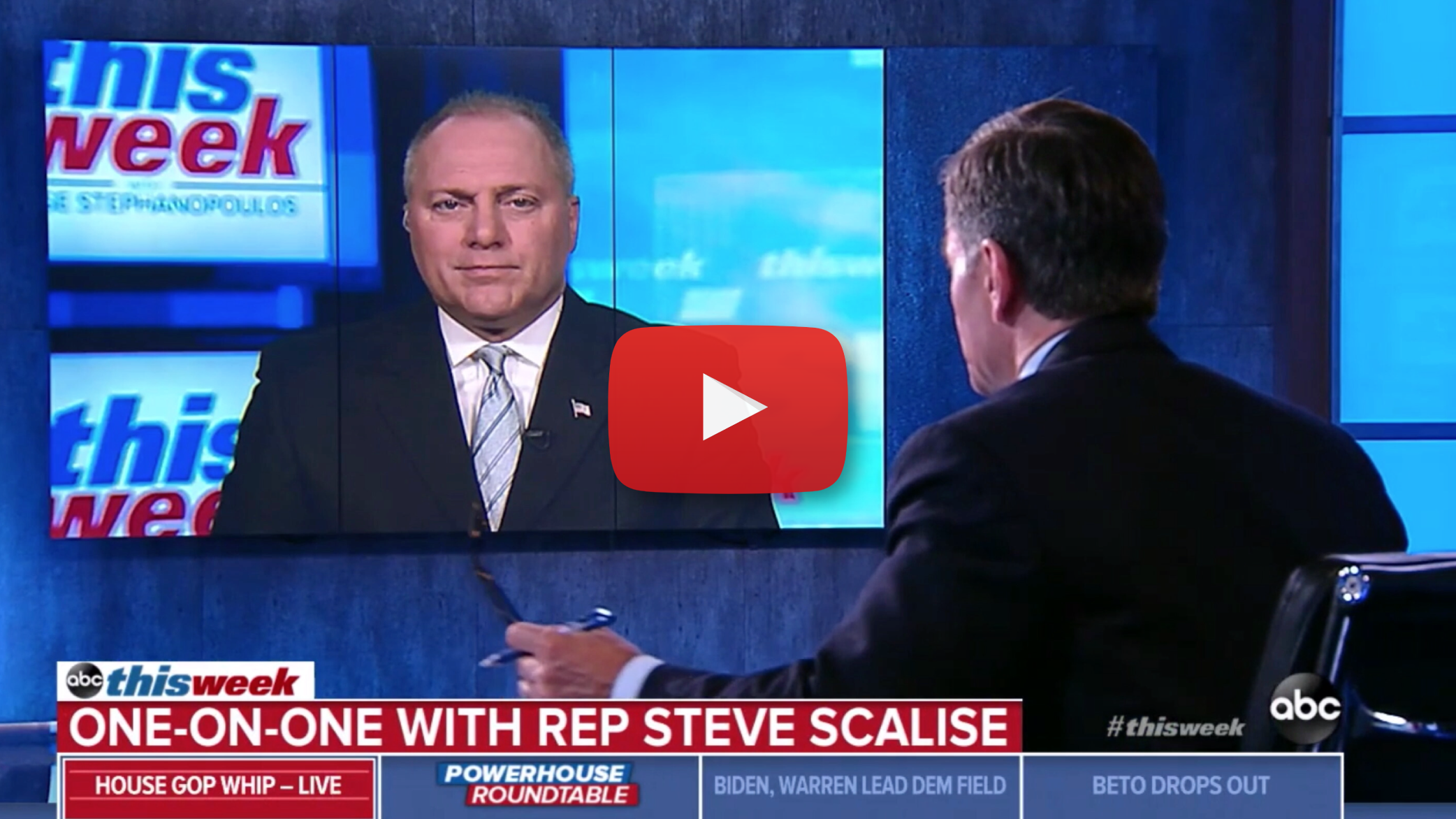 On the lack of due process for President Trump under Democrats’ partisan impeachment resolution:

“There were a lot of things there that need to be unraveled. First of all, this is nothing like the Clinton and the Nixon impeachment. Both sides got to call witnesses under Clinton and under Nixon. The President’s legal counsel was in the room, able to ask questions to thewitnesses. President Trump can’t even have legal counsel there.
…

“…In fact, the resolution [Democrats] just passed in a very partisan way gives theChairman the full discretion to kick the President’s legal counsel out of the room and to veto any witnesses that we would call. That was in the resolution. We had an amendment, by the way, George, to change that. They didn’t accept any Republican amendments, they didn’t negotiate with the White House on that resolution. Under Clinton and Nixon there was a bipartisan negotiation to at least have fair rules. They don’t want fair rules, they just want to hurt President Trump’s chances to win reelection. It’s all about reversing the results of the 2016 election. There are no high crimes or misdemeanors.”

On President Trump’s attempt to root out corruption in Ukraine:

“Well, first of all, that’s not what was happening on the phone call. Even when thePresident said ‘will you do me a favor,’ he then went on to ask about Crowdstrike, that wasn’t about Joe Biden. And so taking that out of context is something that a lot ofDemocrats do.

“That wasn’t, first of all, about political opponents. The law, George, requires President Trump, or any President, when they’re sending foreign aid, tax payer money, to another country, to first ensure that that country is rooting out corruption. He and [Ukraine President Zelensky] were talking about that on the phone call. That’s a law by the way that most Democrats voted for.”

“Well, first of all on that call [President Trump] was not talking about the 2020 election or political opponents, he was talking about corruption relating to the 2016 elections. By theway, when Russia tried to interfere, George, when Russia tried to interfere with our election, it was Barack Obama who was President, not Donald Trump. President Trump has a legal requirement to ensure that the country given foreign aid, in this case Ukraine, is taking steps to root out corruption. And he and President Zelensky talked about that. Zelensky, in fact, was asked, did he think it was inappropriate, was there pressure put on him, and President Zelensky said he wasn’t pressured. And he got the money ultimately. He got the money.”
On President Trump’s phone call with Ukraine President Zelensky and the lack ofquid pro quo:
“It wasn’t about a political opponent, it was about corruption that had happened prior. First of all, Joe Biden, when he was Vice President of the United States – that’s what we’re talking about – when he was Vice President – bragged that he went to Ukraine and withheld the money. He said, ‘I’m not leaving. In six hours, I’m leaving with the billion dollars that was our taxpayer money, unless you fire the prosecutor,’ that happened to be looking into his son. Joe Biden bragged about that. That’s not a question of fact. It did happen. And so Ukraine had a lot of concerns about corruption. Zelensky got elected on a platform to root out corruption. And he was focused on that. They talked about that on thecall. In the meantime, President Trump had already authorized the sale of Javelin missiles so that Ukraine could stand up to Russia. President Obama and Joe Biden would not send those Javelin missiles to Ukraine. I don’t know why they withheld them, but President Trump sold them to help Ukraine stand up to Russia.”

“It wasn’t about the 2020 election, it was about what had happened prior in 2016, corruption in Ukraine. And again, the law requires the President to certify that a country before they get foreign aid is actually taking steps to root out corruption. [Speaker Pelosi] voted for that. [Chairman Adam Schiff] voted for that. I would imagine Eliot Engel voted for that. But at the end of the day, the President was talking to Zelensky about rooting out corruption. And Zelensky himself said there was nothing wrong with the call. He wasn’t pressured. And he got the money. He actually got the taxpayer money.”
On Democrats using impeachment to overturn the results of the 2016 election, despite evidence of high crimes or misdemeanors:
“…But in the end, George, what you’re seeing Democrats talk about is using impeachment to try to hurt Trump’s chances in 2020. In fact, the lead author [Rep. Al Green] of theArticles of Impeachment said ‘if they don’t impeach President Trump he will get reelected.’ That’s not why you have impeachment, it’s for high crimes and misdemeanors. I mean, Alexander Hamilton warned about days like this where impeachment would be used for political reasons, not because there was a crime committed. They have not laid out a crime. In fact, President Trump gave the money to Ukraine. Zelensky acknowledged that. He wasn’t even aware it was withheld. But law, current law, that Democrats voted for, requires the President before he sends taxpayer money to Ukraine to ensure they’re rooting out corruption. That’s what they were talking about on the call.”
On Democrats denying rights to the American people as they pursue their behind closed doors impeachment:
“Well, there are a lot of people [Republicans would like to see called as witnesses.] I mean, the whistleblower themselves, this is a person who claims to be a whistleblower, but even the [Inspector General] reported that this person has a political bias. There are many reports out there that the whistleblower actually worked [with] Joe Biden. That concerns a lot of people. There are also a lot of reports that Adam Schiff and his staff coached thewhistleblower prior to the whistleblower report being released. Those are all serious questions when somebody behind closed doors, in secret, is trying to take out a sitting President. There are a lot of questions that haven’t been answered. We can’t see thetranscripts still. I wish those were held in public, like the Nixon and the Clinton trials. This is nothing like Nixon and Clinton. They’re literally going behind closed doors to deny rights to not only the Republicans and President Trump, but to the American people. The vast majority of the American people have no idea, except leaked reports that in many cases turned out to be invalid or false, when you talk to people that were actually in the room. But we can’t see that because it’s closed to the public.”