WASHINGTON, D.C. — House Republican Whip Steve Scalise (R-La.) joined Fox News Channel’s Fox & Friends this morning to discuss the true cost of Democrats’ multi-trillion-dollar tax-and-spending spree. Whip Scalise called out President Biden for his out-of-control spending, which has led to an unprecedented increase in inflation that has caused gasoline, car, and food prices to skyrocket. Whip Scalise emphasized that voters around the country rejected Democrats’ radical agenda and are furious that President Biden and Speaker Pelosi are prioritizing their radical base over the needs of struggling families. In addition, Whip Scalise slammed Democrats for voting for a natural gas tax that would raise household electricity costs by 30 percent so the Biden Administration can send $450,000 payments to illegal immigrants. 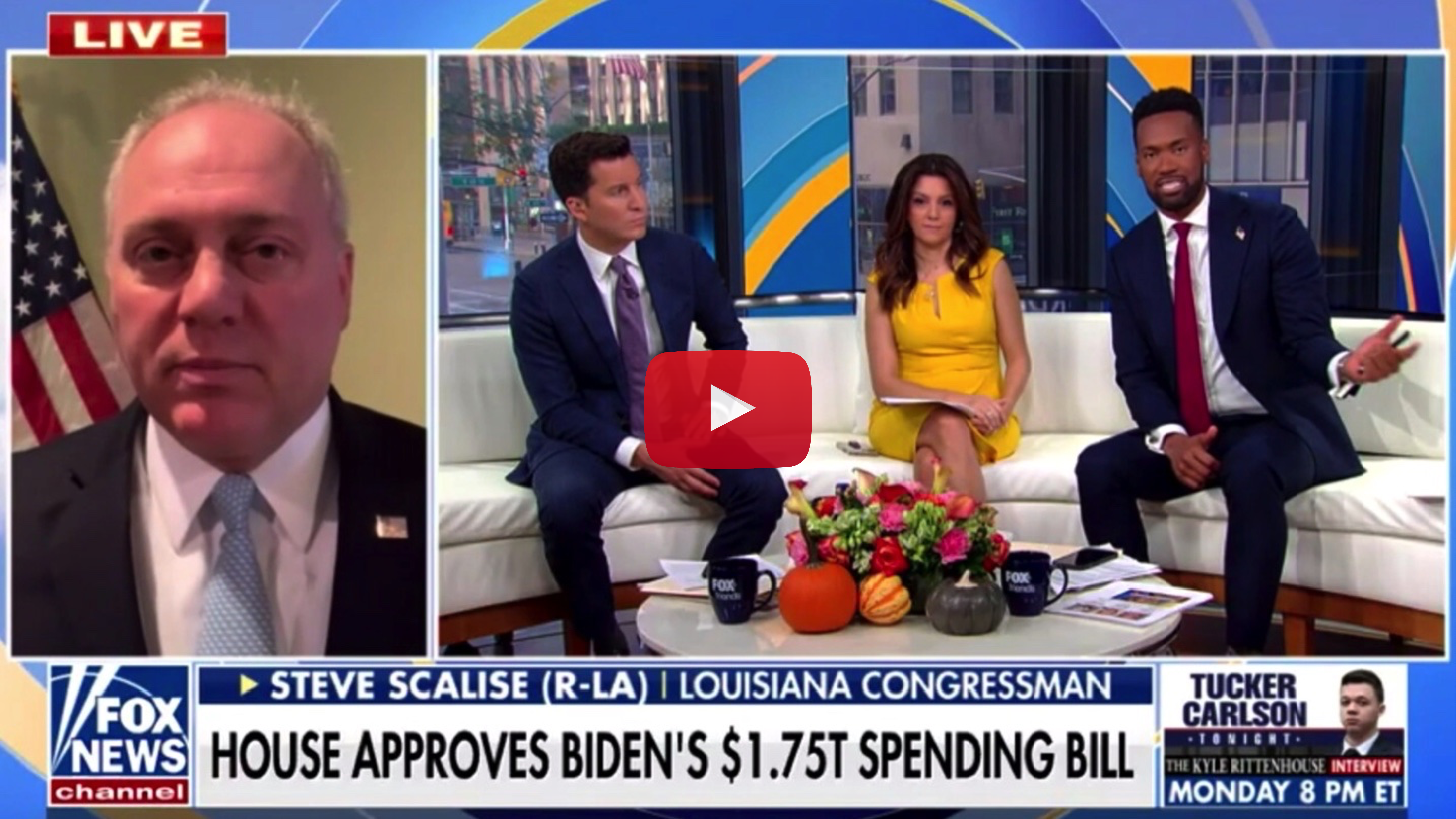 Click here or on the image above to watch the interview.
On Democrats ramming their socialist tax-and-spending spree through the House of Representatives:“Look, I think what you’re seeing across the country, millions of people that are finding out more and more about what’s in this bill, don’t like it. They already are angry about the inflation that’s raising the cost of everything they buy [at the] grocery store, when you go to fill up your car, if you can even afford to fill it up now. They don’t want more Washington spending. And what they saw pass yesterday was trillions more [in] Washington spending.“According to the University of Pennsylvania’s Wharton report, when you take out the budget gimmicks, it could be up to $4 trillion of spending and trillions of dollars in new taxes. Even [Senator] Bernie Sanders pointed out the biggest tax beneficiaries are the millionaires. The people that are going to be paying the most are going to be lower-income people.”On the radical provisions within President Biden and Speaker Pelosi’s big government socialist scam:“Look at the natural gas tax. We’re getting ready to face a cold winter. Imagine paying 30 percent more for your electricity bill because of what the Democrats put in this bill because they want to go spend millions more. They want to have millions [of] more people get amnesty at the same time, the Biden Administration is negotiating to give [$450,000] checks to people who came here illegally. How’s that going to make our border crisis? It’s going to make it worse. People know that. They are just saying, ‘Stop the madness.’ That’s what Virginia voters said two weeks ago. Surely President Biden and Speaker Pelosi don’t care what those voters say. They just want to spend more money, rack up more debt, and increase inflation even higher.”On House Republicans’ unified opposition to Democrats’ tax-and-spending spree:“Yes. In fact, not a single Republican voted for that bill yesterday. We had one Democrat vote with us. I wish there were more. But when it goes to the Senate. They have a razor-thin margin, and, you know, we’ll see if any Democrat tries to lower the amount. Because, look, $1.5 trillion of new spending is not a moderate compromise. I’m sure Washington media will try to portray it that way.…“No, not a single [Republican voted for the tax-and-spend spree] yesterday. Not a single one will when they bring it back. And it will come back at some point, but nothing in that bill would be good for the inflation that we’re seeing. It’s only going to make it worse. It’s going to ultimately be something that saddles our kids and grandkids with more debt, too, because somebody’s got to pay for this stuff. There’s no such thing as a free lunch. You know, free charging cars – nothing’s free, right? We know that, by the way. “These Washington liberals, these big government socialists, think they could trick people and buy people off. Go look at the results in Virginia. It wasn’t just Republicans who voted no. It was liberals who said, ‘Enough of the madness.’ And they don’t care in Washington.”