WASHINGTON, D.C.—House Republican Whip Steve Scalise (R-La.) joined Fox News’ The Ingraham Angle to discuss Democrats’ attempt to hide their sham impeachment process from the American people behind closed doors. Whip Scalise voiced his support for Congressman Andy Biggs’ resolution censuring House Intelligence Chairman Adam Schiff and criticized Democrats for their refusal to go on record and vote for their support of overturning the results of the 2016 election. 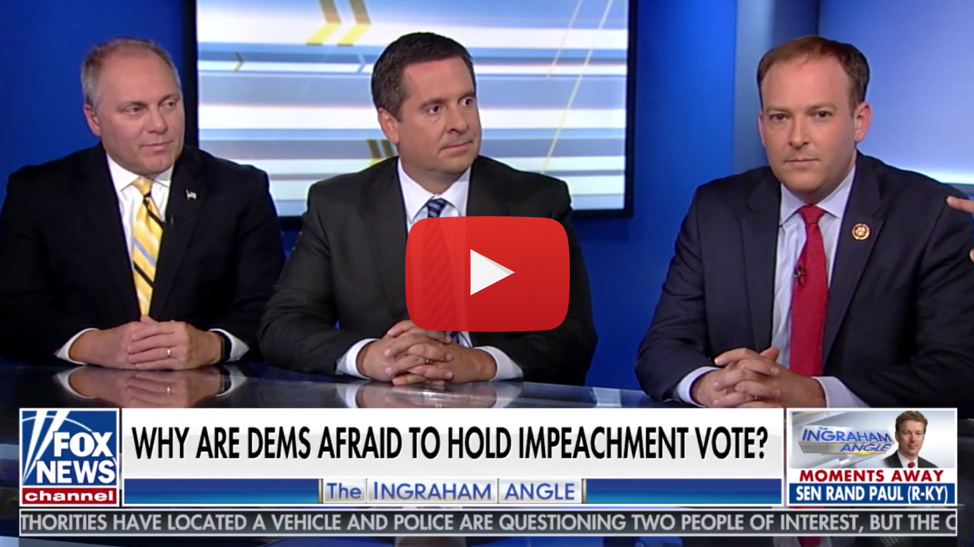 On Democrats hiding impeachment from the American people behind closed doors:

“You know who’s not invited to these meetings by [House Intelligence Chairman Adam Schiff], the American people. He is trying to hide from the American people what’s really going on behind these closed doors. And think about it, they’re trying to remove a President of the United States. Donald Trump was duly elected in 2016. They don’t agree with the election, they’re trying to overturn the election. We’ve got an election again next year, but Adam Schiff and Nancy Pelosi are single-handedly trying to take that ability away from the American people. It all ought to be in public. What is Adam Schiff trying to hide? Why is he trying to have this sham witch hunt type meandering around? They thought the Mueller investigation was going to be their silver bullet, they thought the whistleblower was going to be the silver bullet, now they don’t even want the whistleblower to be anywhere near the Capitol.”

“[Democrats] are keeping the whistleblower wherever they’re keeping [House Judiciary Chairman] Jerry Nadler. Every impeachment hearing goes through the Judiciary Committee – you can’t find Jerry Nadler because Pelosi is trying to hide him from this whole thing too.”

On Democrats refusing to take a vote on their support for impeachment:

“We ought to bring that up. This is Andy Biggs censure resolution. I’m a co-sponsor, I think my colleagues here definitely are as well. We need to get more Democrats on record. Because look, they’re trying to play both sides of this impeachment thing. Back home [Democrats] are going ‘oh you know we’re not really for impeachment’ and up here they’re pushing for impeachment. And that’s why Pelosi refuses to have a vote on the House Floor. All three times that there have been impeachment inquiries before, they went to a vote on the House Floor first.”