WASHINGTON, D.C.—House Republican Whip Steve Scalise (R-La.) joined Fox News Channel’s America’s Newsroom to discuss the proper precautions Americans should take to prevent the spread of Coronavirus and the work Congress has done to address it.

Whip Scalise criticized House Democrats for playing politics with their partisan No Ban Actthat would hamper President Trump’s ability to halt flights from high-risk areas and called on Speaker Pelosi to pull this bill immediately. 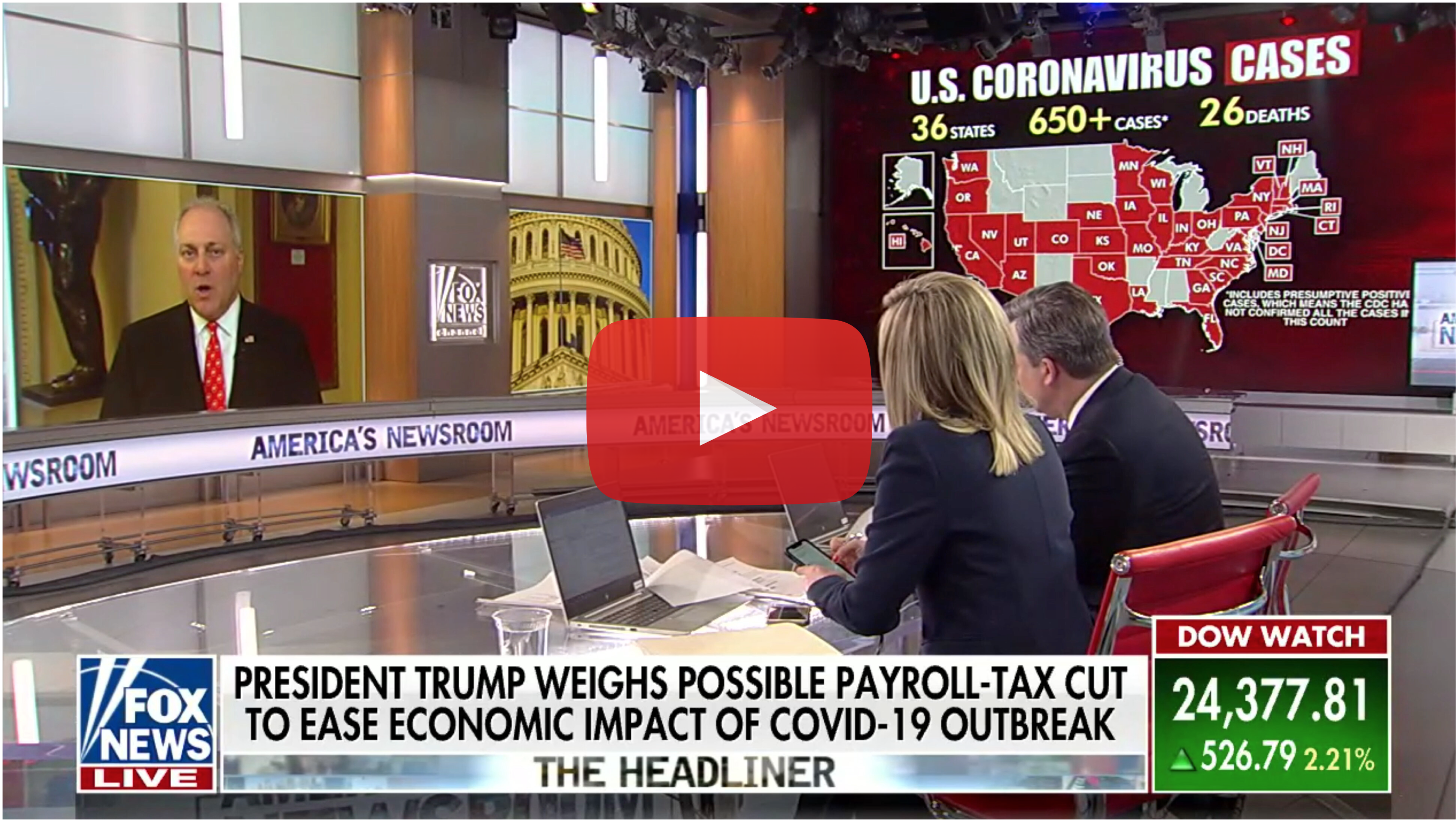 On the necessary precautions everyone should take to prevent the spread of Coronavirus:

“First of all, [Congress] needs to continue doing the people’s business, and that’s what you’re seeing here at the Capitol. Clearly, everybody’s got to take necessary precautions and you’re hearing a very unified message coming out from all officials, from Vice President Pence to health officials letting people know: you’ve got to wash your hands on a regular basis, even in an active Flu season you would take those kinds of precautions. But with Coronavirus, we still don’t have a vaccine, we’re working to get one. You saw Congress come together last week to pass, overwhelmingly, a bill to make sure the President has all the tools he needs as he is addressing this outbreak. And you know, let’s just make sure we’re taking proper precautions. But, in the meantime, we still have work to do.”

On the need to pull the No Ban Act from the House Floor:

“I will say, there is a bill on the [House Floor] this week that Speaker Pelosi is planning to bring called the No Ban Act that would actually make it more difficult for the President to, for example, stop people coming in from countries that have a high propensity of outbreaks of the Coronavirus. And President Trump was able to successfully use his authorities to limit the number of people coming in from China when it was initially starting [to] come out of China. Why would you want to bring legislation that would make it harder for the President to do his job keeping this country safe? I would urge Speaker Pelosi to pull the No Ban Act from the [House Floor].”

“People like Chuck Schumer need to stop threatening Supreme Court Justices and hoping that bad things happen for the economy. Look, I mean, President Trump is doing his job. Number one: keeping Americans safe. That is his top job and he’s done it incredibly effectively. He’s concerned about making sure that families are able to have a strong economy, and we’ve got a strong economy. There are troubles right now that are related to the uncertainty with this outbreak, and we need to continue making sure that CDC, HHS, all the federal agencies have the tools they need to properly respond, to test, and to ultimately find a vaccine. President Trump is working on all fronts. He put Vice President Pence in charge, which by the way, was a recommendation of a bipartisan panel. [Democrats] have to stop the political games that some of these folks are playing here on [Capitol Hill] and focus more on doing their job and frankly, there is work left to be done.”

On legislative solutions to prevent the damaging impacts of Coronavirus:

“I know the President is talking about specifics, it’s not the time [for Democrats] to negotiate while we’re still trying to address what the real problems are in the economy. We need to number one, make sure we have an assessment of what’s happening and make sure the agencies have the tools that they need to do their jobs, and there’s even talk of possibly some other legislation to make sure that companies that are making masks and other things are able to do that properly. But in the end, we need to do this in a bipartisan way. That’s the approach that President Trump has been taking and hopefully everybody here on [Capitol Hill] works together and not just throws ideas out that are unrelated. You see a lot of people are taking out their wish list from Christmas and they’re trying to throw that into a bill because they see an opportunity. It’s not the time to take advantage of the situation. Let’s focus on doing targeted things that help keep Americans safe and get our economy back in a strong position.”

“Again, first of all, the President is looking at a number of things to make sure that he keeps a strong economy going. We’ve had an incredible recovery, an unprecedented recovery, since President Trump took office; cut taxes, got regulations under control, and bringing millions of jobs back to America. And again, when you look at what is happening with the economy, some of it is because of supply chain issues because there is too much of a reliance on countries like China. It’s one of the reasons the President’s America First agenda is so powerful at helping rebuild our economy. But we’re in a tough position right now. Let’s all work together to get through it. Let’s focus on the details we can get common ground on, and that is currently being negotiated. We’re not at a place where we have legislative text yet to bring it to the [House Floor].”